We’re 60% of the way through the season and you haven’t sued us for boredom! I can’t believe we’re not boring! I’m going to put that on my next CV so that my next potential employer can reject a “not boring” person. Or maybe that will get me kicked out of Elon Musk’s hole-digging company. Ever wonder why billionaires want to dig holes and fly into space at the same time? Probably for their space boring tech. Elon Musk watched The Expanse and thought it was an inspirational business story. I think he’d make a good asteroid maven. Can’t become president on Earth? Why not be king of your own asteroid? Rob Manfred’s probably already prepping for a 2030 Moon Base MLB game, sponsored by Gemini, where all the players get paid in Bitcoin. Then when Shohei Ohtani Jr. hits a 3,000 foot popup, Manfred will cancel low gravity on the moon and return all the players to their natural home: a row of folding chairs in a hotel lobby. I kid! We here at Razzball love Rob Manfred and everything he’s done for the game of baseball, including making the lives of pitcher rankers completely miserable by getting rid of Spider Tack. Catch me after the Greinke graphic to see what’s in store for the rest of the season! 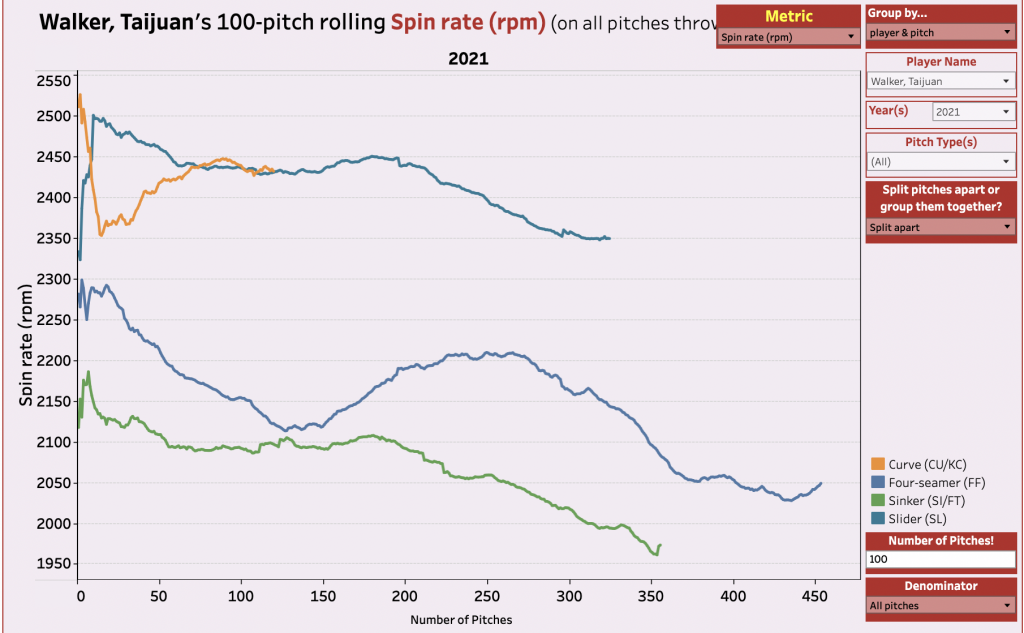 Sale with 13 pitches in the first inning, 9 for strikes. pic.twitter.com/pyGeIWhElp 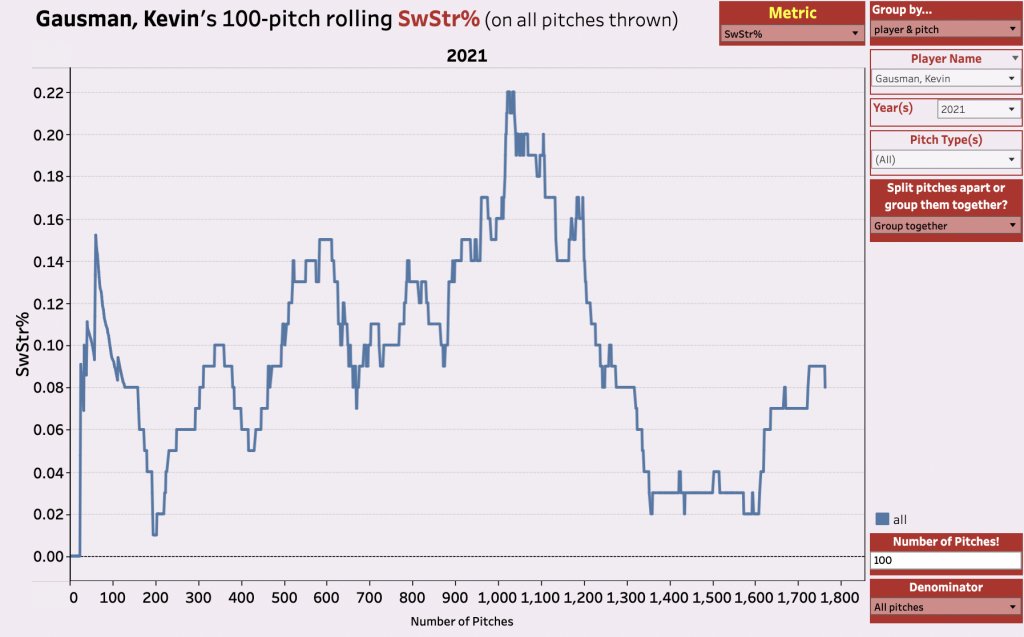 So what the Coolio is going on here? In his past two games, Gausman’s pitches off the plate have been hammered, which isn’t…ya know…the usual. But certainly, he’s struggling to miss bats, which leads to worse outcomes overall. But all great pitchers have periods of struggle, sometimes lasting upwards of a month or more. It’s just too bad for all of us fantasy managers that he’s struggling right now, when the fantasy playoffs are coming up. So, fingers crossed that Gausman gets it figured out ASAP. In the meantime, you’ve got my breakdown of Patrick Sandoval and Tylor Megill above, who are each available in 50% or more leagues. Grab them as ballast while Gausman rights the ship.

We’re entering the phase of the season where we might see some really weird players taking starting pitcher roles. Like, good ol’ Colin McHugh, who makes his debut in the 40s today. Wait, is this the weather report for New York in December? ENYWHEY. There’s a non-zero chance for pitchers of all utility roles to take starts because the majority of MLB clubs are about to start limiting IP (unless your name is Lancelot Lynn), and pitchers like Rich Hill and Colin McHugh are willing to play as much as their team needs to make the playoffs. So, if you’re browsing the ol’ Streamonator and see a player you don’t recognize starting, come take a look at the confidence scale and see that, yes, I don’t trust them unless their name is Robert Ray.

Have an awesome week everybody! Be sure to check out Razzball Football as we get underway for the preseason!

How is one to intepret your hard work when there are pitchers on this list who haven’t thrown a pitch in over a month? Beiber.

You might have missed the previous editions where I explain this and I’ll reup it for you — I provide a confidence score for pitchers based on *if* they pitch. Baseball managers are going to be incredibly volatile down the stretch with pitchers — Peralta’s already being notched down, and Bieber might be kept on the sidelines to lower his arbitration value. Rudy’s rankings (the Streamonator) provide all the injury/start data, but he doesn’t focus on aspects like K-BB and CSW like I do. So I combine all the above to give fantasy managers a better sense of what to do in the case of a pitcher taking the mound, and for fantasy managers to have confidence in acquiring players who might be on the IL right now. Hope that helps!

Thanks for the clarification.

No problem have a good one!

Thanks for the write-up EWB.

That’s why I’ve got my voodoo dolls lined up with all his favorite players. :)

Thanks for the support!

Can’t become president on Earth? Why not be king of your own asteroid.

This is unintentionally also a great plot to a low budget indie film.

I think you’re really coming into your own, I haven’t paused to laugh that often in a while man. I may not comment but I’m always reading

I’m gonna frame this comment and put it right next to my “World’s Okayest Screenwriter” award that Grey gave me. Thanks for the support!

Hi can you tell me more about these “hot” pitchers down the stretch? And am I one of them?

OF COURSE YOU ARE ROBBIE, YOU’RE THE HOTTEST

Thanks Again for helping me I always appreciate your advice.

I was actually thinking of starting all five. what do you think? I am looking forward to your thoughts

Mr. Blair, 6×6, H2H, 12 team – I have Sonny Gray on my roster now, but would you drop him ROS for Paddack, Gallen, Gilbert, Sandoval or Houck? Your top three in order Please.. thanks man!

I like Gray on paper but his injuries are working for IP. Sandoval, Gilbert, Paddack are my faces as a replacement.

Might be a bit late here, but who would you prefer in a dynasty: Javier or urquidy?

Javier by a fair amount — many pitchers control better as they age, and Javier’s got that upside. Hope that helps!

Hey Blair, would you drop Ryu for Kikuchi? H2H Cat K/W/ERA/WHIP. Thanks.

Ryu’s moving out of Sahlen field, and it’s a close call because Ryu’s true skill numbers are still pretty Greinke-esque, but Kikuchi’s got the edge in a ROS situation. Hope that helps!

Rookie pitcher I know, but Josiah Gray, where would he fit in? Or a ballpark guess?

Tough call right now. He’s whiffing a stunning 20% of bats but also has a low BABIP (.230) and a wild difference between ERA/xERA/xFIP. Meaning: too small of a sample size to tell right now.

I like upside though, so I’m fine adding him in deep leagues. The rarest thing to find — other than IP this year — is a 20% swinging strike rate, so I focus on that number and hope the rest comes around.

He’s right in front of Garrett Richards and right behind Antonio Senzatala. Hideous. Touki should be about 100 spots higher.

Sounds good, I’ll stick a pin in his voodoo doll for ya

Where would you slot Touki in on this list?

Ah, yes, a fine addition. I updated the table with his current stats, and he’s sitting in the 90s for confidence, which is definitely bottom-end streamer levels of confidence. He’s got a great ability to draw whiffs, but he’s extremely volatile and probably won’t grind enough meaningful innings through the year. Hope that helps!

Whew, tough one. Definitely not Minor right now. MadBum has been all over the place this year but he’s definitely shown that he didn’t keep up his training and has been injured a ton. But, it’s a tough week for streamers, so I probably start MadBum at TEX because he looks like he’s got about a 50/50 chance.

Come on Blair. The driftwood is clearly the more appealing choice here.

Homer's got the Runs

Hey, I am serious need for wins in one of my leagues. Would you do Rizzo and Greinke for Olson? Redraft league. Not many teams have pitchers to give as the cats are close.

everywhereblair
Author
Reply to  Homer's got the Runs

If wins are what you’re after, Greinke’s got a good a chance at *not* being inning capped through the rest of the season as anybody else. He’s always been a workhorse, and if you can sacrifice some Ks for Ws, I’m fine with that trade.

You have six pitchers ahead of Urias and Wheeler that I wouldn’t consider picking over either of them. Terrible.

Just doing my best to piss you off every week, Harley!

Hahahahahhaaa!!! You’re good at it!