2017 has been a weird season for baseball. Not only are baseballs leaving ballparks like super balls, but players like Justin Smoak and Logan Morrison are winning fantasy leagues for people. Before the season started, I never thought I would be writing those names on this website. Now, I write them every week (Okay, usually I just have to copy/paste).

While doing some research over the All-Star break, I found more than a dozen players who had already hit more home runs in the first half of 2017 than they ever had in any other full season. That wasn’t even really what I was looking for. I just kept finding more and more of them. One of those players, as you may have guessed because of the title of this article and the number of professional baseball players named Marwin, is Marwin Gonzalez.

Gonzalez is a player I have been keeping an eye on all year and is someone commenters have been asking about a lot lately. Until recently, he still wasn’t playing every day and was moving all over the field. When he did play, though, he was mashing. Son wrote about him in his Bear or Bull series last week, and I recommend going and giving that a read. I’ll wait here while you do.

So, we get it. He has been great this season when given a chance to play. Now, let’s take a look at what we can expect in the second half. At first glance, the first area you would expect to see some regression is BABIP, where he currently boasts a .346 mark. But here’s the thing. Gonzalez has posted an above-average BABIP for pretty much his entire career. More chart proof, please! 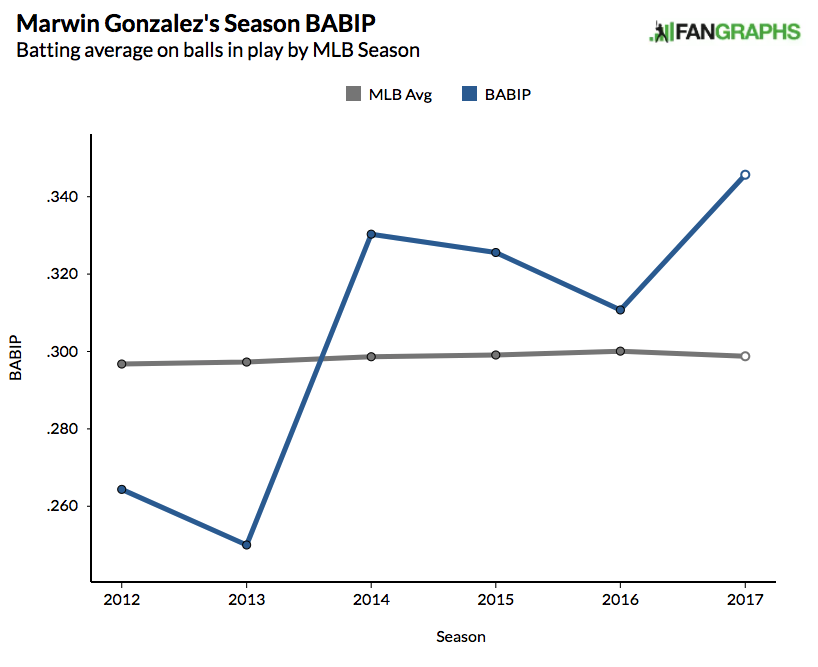 The BABIP is up more this year than in the past, but it would not be at all surprising to see him continue to post a BABIP above the league average. Despite the high BABIP, his hard contact percentage is down and his soft contact percentage is up. His, HR/FB percentage, though, is all the way up to 25.4%. For comparison, the league average for HR/FB% is 13.7% while Aaron Judge is up near 40%.

As we have already talked about a bit, the thing that really jumps out about Gonzalez this year is the power. His .272 ISO is more than 120 points above his career average, and that is despite posting a batting average that is more than 50 points higher than his career average. Even for playing with super balls, those numbers are pretty incredible. The guess here is that those numbers come down at least a little bit in the second half.

I am adding Marwin Gonzalez to the Top 100, but I am doing so begrudgingly. Maybe it is just the cynic in me, and maybe it just takes me longer to warm up to players who have already established themselves, or maybe I’m just a jerk. That being said, 2017 has been so weird that who knows anymore. Maybe he’ll win MVP.

Now, a few things worry me about M-Gon in the second half. Some general regression is, of course, at the top of the list. The next is probably playing time. He has been playing more the last few weeks, but he is still a super utility player who doesn’t have an everyday spot on the field or in the lineup. Even if they continue to ride his hot bat, you know that in weekly leagues he is still going to sit at least once or twice, and he is one slump away from sitting 3-4 times a week.

With a juiced lineup on the field in Houston and juiced baseballs all over the play, though, maybe Gonzalez can be one of the guys who gets his chance and turns into a stud. But that lineup in Houston also works against him. The Astros don’t really have a weak spot in their lineup right now and have another pretty talented bat in Evan Gattis that doesn’t have an everyday spot in the lineup. And if that were not enough, they have prospects like Derek Fisher who are ready to step in and contribute. M-Gon doesn’t exactly have any long-term lineup security.

One thing super utility players who are hitting well usually do when they start to play every day: stop hitting. So, while it is fun to project short term success into a full season of production, many times these players are utility players for a reason.

Now, for the rest of the Top 100. Not too many changes here since I just overhauled the list on Wednesday for the second half, and there have only been a few games since then.