Please see our player page for Chris Taylor to see projections for today, the next 7 days and rest of season as well as stats and gamelogs designed with the fantasy baseball player in mind.

We’re towards the end of our marathon, friends. One or two weeks separate us from fantasy glory depending on your league settings. If you’re in a head-to-head league, you’re likely looking at the 7 & 30-day Player Rater. Middle infielders Willy Adames, Gleyber Torres, Marcus Semien, and Gunnar Henderson have been among the hottest bats […]

Orlando Arcia went down with a hamstring strain and some teams would’ve just cobbled together a makeshift shortstop out of available major league pieces. A Frankenshortstop, so to speak. And it might’ve been fine, might’ve ran into a hot day or three from whoever they Ehire’d. That’s the kind of shizz other teams do! Not the Braves! I love the Braves for this, by the way. They promote their prospects like they’re Tim McGraw singing Live Like You’re Dying. They’re on a bull named Fu Manchu, and they promote their guys! Love it! Of course, sometimes with pitchers, they come up, surprise hitters for three to six months, then fade into obscurity, unable to handle setbacks. But who cares about that now? Their sticks come up and stick. Yesterday, they promoted Vaughn Grissom from Double-A, where he was 3/7/.363 in 22 games, after going 11/20/.312 in High-A. He appeared in Itch’s Top 50 prospects, and now appears on all of my teams, because I love me some rookie nookie! Plus, he got a slam (1) and legs (1) in his major league game (2-for-4, 2 runs, 2 RBIs), and the homer was an absolute moonshot over the Green Monster. Haven’t been that impressed by a Braves’ rookie debut since Jason Heyward’s! Okay, that’s not fair, but trying to put things in perspective. Anyway, here’s what else I saw yesterday in fantasy baseball:

Hey All, Well, we’ve surely had a Trade Deadline to tell the kids and grandkids about! Padres general manager AJ Preller has cleared out his farm system in a way we’ve never seen before. Talk about seizing the day and making a push for job security! We also have a clearer idea of the teams […]

Hola Razzamigos! Welcome to your Razzball weekly fantasy baseball injury report. First, please ensure you buckle your safety belts, secure your tray table in the upright position, and read the safety pamphlet in the seat pocket in front of you. Second, I have traditionally added intra-team roster transactions and/or replacements for injured folks. I am […]

There’s a few types of ledes in fantasy baseball: The major player injured lede; the huge game from a player lede; the call-up lede (very popular lede) and the least popular lede — the giving flowers to a player who has had an incredible season lede. That’s today’s lede. I must give Sandy Alcantara (8 IP, 0 ER, 2 hits, zero walks, 10 Ks, ERA at 1.82) his flowers. What a fantastic season this guy is having. My God who art in heaven in Miami and speaks with a thick Cuban accent like Scarface, this was the starter year to have after Tony Gonsolin and Shane McClanahan, and, honestly, not that far behind. I, of course, missed Alcantara everywhere, because I was too caught up in his K:BB. 99.5% of the time K:BB is everything. Occasionally, you get an Alcantara. The scary thing is, if you just showed me his stats, I’d prolly still be a sell on him, but he’s proven to be a 200 IP, 3.00 ERA, 1.00 WHIP pitcher. That is crazy valuable. So, is Sandy Alcantara the best pitcher in baseball? I can’t make that case because of his strikeouts. A top three starter we all could’ve had around the 17th starter off the board? Al-can-lutely! Anyway, here’s what else I saw yesterday in fantasy baseball:

What a slate of SPs going today. Chris Bassitt gets to host the Rangers, but check out his ER given up his past eight starts: 3, 3, 0, 7, 4, 1, 8, 4. This hound has spent the last month dog-wiping all over your ratios. Who else ya got, Streamonator? Joe Ryan checks in going […]

Bert Blyleven allowed a major league record 50 homers in 1986. It was in 271 innings. Hunter Greene (5 IP, 5 ER, ERA at 5.89) might beat the record in 100 innings. There’s an old adage (I don’t know what an adage is but it sounds good) and it goes that starters are better at home. Just in general. Of course, there’s exceptions. Or I should say “of Coors.” Any hoo! Greene is the type that could throw a 15-K shutout vs. the Dodgers or give up five homers to the Marlins with Miguel Rojas leading the charge. His opponent or environs don’t matter, so it’s hard to roster a guy like that. Also, don’t ever say “environs” in real life, person you’re with has ever right to punch you. The offensive star of the game for the Reds was Kyle Farmer (4-for-4, 3 runs, 5 RBIs and his 2nd and 3rd homer). Was his first game back from being out with general soreness. Lucky he didn’t run into Major Setback. Also, in this game, Nick Senzel (4-for-4, 3 runs, 1 RBI) did what we expected of him in 2019, and 2020, and 2021, and, well, you get the picture, as he hit leadoff. Was this a sign of things to come or just going against a terrible pitcher? Well, Justin Steele (2 IP, 7 ER, ERA at 5.40) did not look good. Maybe it wasnt the best idea to pitch the Man of Steele against a guy the color of Kryptonite. Anyway, here’s what else I saw yesterday in fantasy baseball:

“Only thing better than three homers in a game is three World Championships in three years for three different teams.” — Joc Pederson probably. Joc Pederson is 80-grade fun. Maybe it’s the goofy paunchy body, maybe it’s the frosted hair that seems done by himself on a whim. I don’t know; he’s just so much fun. Yesterday, him and his fantasy owners had a whole lotta fun — 4-for-6, 8 RBIs and his 8th, 9th and 10th homers and his first career three-homer game. I know it’s inaccurate, but it feels like Joc Pederson hits 30 homers every year, and they’re all hit in the matter of 10 games. Think the only thing you need to know about Joc Pederson is this picture: 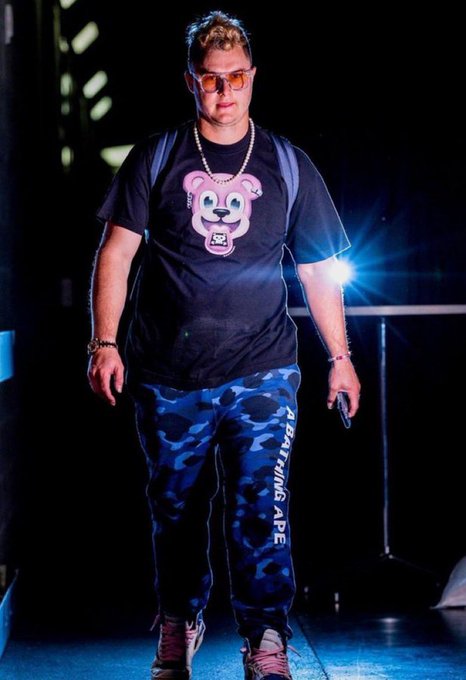 Joc Pederson has ice in his veins and NFTs in his crypto wallet. Anyway, here’s what else I saw yesterday in fantasy baseball:

It’s kinda crazy how much Lisa Loeb was singing about Yusei Kikuchi (6 IP, 0 ER, 1 hit, 3 walks, 6 Ks, ERA at 3.38) when he was only three years old. Yusei’s command is usually around a 3.5 BB/9, but this year so far it’s 5.6. His Ks are still so far’king good — 9.3 K/9, and his velocity is fine (95 MPH on the speedball), and he seemed like he wasn’t controlling the cutter/slider well early on, and it was forcing him to throw the fastball more. So hitters were sitting dead-red on the chugga-chugga, and it wasn’t working. In his last three starts, things have been better, and Yusei isn’t just a Gen X anthem for lost love angst. Yusei…Stay on my teams. Anyway, here’s what else I saw yesterday in fantasy baseball:

It is Thursday, May 12th which means MLB has a split slate with several teams not playing tonight! This article will be on the four-game slate at 6:35 pm ET on FanDuel. To dig deeper into the best plays, check out our DFS tools! We will start our lineup off tonight with Corey Seager, SS: […]

Good day, All, Things have been interesting as usual as we are approaching the end of the first calendar month of the MLB season –  future Hall-of-Famer Miguel Cabrera reached 3,000 hits, the Rays threw nine no-hit innings in a game that ended up not being a no-hitter, and MLB is allegedly using two different […]

Good day, Razzball fam, Spring Training is finally underway, more and more free agents are off the board, and trades are being made! This week we’ll be taking a look at second basemen. Second baseman as a whole this year seem to be shallower than shortstops and free agency doesn’t seem to have made a […]