If you hail from Central New Jersey, sorry. I didn’t mean to get your hopes up. Albert Pujols does not represent the 609. If you are a Ludacris fan, sorry. Pujols may or may not have garden hoes in different area codes, but I can neither confirm nor deny it. Rather, Pujols slugged his 609th career home run Friday night. It doesn’t matter that it came off Jeremy Hellickson, who’s allowed the 14th-most home runs this season, and is already the 439th-worst of all time. I was going to go on an epic rant about how all the stories are focused on the fact that he’s tied with Sammy Sosa for the most home runs by a foreign-born player. Who gives a flying F where he was born? Then I started thinking, I wonder which player born in Los Angeles has hit the most home runs. Yet again, I’ve managed to stymie myself. Anyways, who cares that Pujols has a triple slash of .229/.274/.374 with an ISO of .144. Let’s just celebrate the great career he’s had and send him off into the sunset after this season. My self checks to make sure this is his last year…

Here’s what else I saw Friday night:

Jeremy Hellickson – Just in case you didn’t believe what I was writing above about Hellickson, he gave up five home runs in 4 2/3 innings. I’m of the opinion that is a sub-optimal ratio to have. If you care, he allowed eight total hits, seven earned runs, and struck out two. He didn’t issue a walk, though. On a night filled with history, why not just let Hellickson try to break the record for home runs allowed in a game? He only needed to give up three more to break it.

Literally, as I was writing this piece, the Angels were up 7-5 heading into the bottom of the ninth. I look up and I see that they lost 9-7. 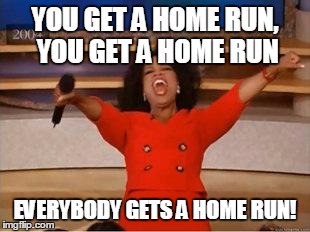 Manny Machado went 3-for-5 with three home runs and seven RBI, including the walk off. I think this is an instance when the numbers speak for themselves. Speak numbers. Speak.

Tim Beckham with another two hits and two runs scored. Yawn. Wake me up when he doesn’t do something.

Mark Trumbo and Caleb Joseph both with a home run off Andrew Heaney (five innings, seven hits, five earned runs, five strikeouts, and four home runs allowed) who was locked in an epic duel with Hellickson. I gotta say. The heart they both showed last night really inspired me.

Chris Taylor went 4-for-5 with a run scored and two RBI. I’ve been looking at Taylor’s BABIP all season and thinking that regression is coming at some point. It’s at .391 right now. I’ll maybe start thinking about fading him when it gets to .750. The freaking guy also stole a base, which gives him 14 for the year.

Adrian Gonzalez went 1-for-4 with a run scored and a RBI. Just wanted to remind you all that he’s still alive. Now, the Dodgers are just rubbing it in.

Speaking of players that are still alive, Victor Martinez went 2-for-5 with a HR. After the game, Victor was asking when they play the Baltimore Orioles.

Justin Upton had a monster game going 4-for-5 with two home runs and a double. Who’s been passed around more? Kate or Justin? Kind of baffling that they both were, but here we are contemplating the question.

Matt Garza and German Marquez “dueled” in Colorado. They both allowed three home runs each and gave up a shit load of runs. You don’t care about their lines, so I’ll just tell you who did the damage.

Charlie Blackmon went 2-for-3 with a HR. He’s scored 113 runs on the season, which is 21 more than second place. Does the black delegation amend their Eminem pick?

Carlos Gonzalez (2-for-4 with a HR). Today’s post is about dead guys and dongs.

Eric Thames (2-for-5 with a double and a triple). Batting lead off. Susan, let’s go live to Korea…

Domingo Santana, Orlando Arcia, and Keon Broxton know a little German, as they all hit a home run off Marquez. School is cool kids.

Corey Kluber (5 1/3 innings, six hits, one earned run, one walk, and four strikeouts). The Klubot left the game early due to a sprained ankle suffered in the sixth inning when he landed awkwardly trying to cover first base.

Jason Kipnis (1-for-4 with a HR). He’s homered in three of the past four games. This is real. JK.

Edwin Encarnacion (2-for-5 with a HR). Nothing makes me happier than watching the parrot trot around the bases.

Melky Cabrera (3-for-4). If you need help in average and, literally nothing else, then Melky is your guy.

Dallas Keuchel (Seven innings, three hits, zero earned runs, one walk, and three strikeouts). Looks like he’s rounding into form. Imagine a young stud who was a Casanova with the ladies. One day, he’s thrown into a spaceship for reasons unknown. For two months, he orbits the Earth and is unable to jerk off. Why? Because where’s the cum going to go? It would just float around aimlessly in the cabin. So, for two months, nothing. When he returns to Earth, he’s greeted by the finest women in all the land. How do you think he’d perform that first night?

Matt Joyce (2-for-2 with a HR). My momma always said, “If you can’t say something nice about someone, don’t say anything at all.” She didn’t really say that. She’s Korean. The expression seemed appropriate in this particular case, though.

Jake Arrieta went 6 1/3 innings, allowed six hits, one earned run, walked two, and struck out six. Damn, I didn’t realize how good Arrieta has been. His numbers are very similar to last year. The K/9 is 0.01 higher this year. He’s even walking fewer batters. The only difference is that he’s allowed more home runs. He’s allowed two earned runs or fewer in seven straight starts.

Javier Baez (2-for-4 with a HR and three RBI). I just saw the headline, “Is Javy Baez the most exciting athlete in Chicago?” Wow, things are that bad in Chicago?

Anthony Rizzo (2-for-4 with two RBI and a stolen base). In authentic Italian-accented voice, Hey Tony. I heard that Baez is the most exciting athlete in Chicago. Momma mia!

David Freese (1-for-4 with a HR and two RBI). Freese has done something to Hell eight times this season.

Tommy Pham (1-for-4 with a HR and two RBI). I love green eggs and Tommy Pham.

Matt Carpenter (1-for-3 with a HR and three RBI). James Loney has reincarnated!

Paul DeJong (3-for-5 with a HR and two RBI). All DeJong does is hit dongs!

Drew Pomeranz went 3 1/3 innings, allowed four hits, walked one, and struck out four without allowing an earned run. He left the game early due to a back issue. Cancel that subscription!

Aroldis Chapman allowed two hits, two earned runs, walked one, and struck out one in an inning of work. He’s allowed seven earned runs in his last 4 1/3 innings. Teams are hitting him like….I better stop there.

Todd Frazier (2-for-3 with a HR and two RBI). Since becoming a Yankee, the Toddfather is batting .207 with four home runs. He will run into one every now and then, about as often as I see a yellow cab in Los Angeles.

Christian Vazquez (3-for-3 with a HR). He plays catcher.

Ahmed Rosario (2-for-4 with a stolen base). You know how every time a Met hits a home run and the Apple rises? Every time a Met steals a base, they should flash this on the scoreboard….

Nelson Cruz had himself a day: 3-for-5 with a HR and two doubles. He’s at 30 home runs for the year. Damn, I just realized that he has a chance to hit 40 home runs for the fourth straight season. That’s some good ass s…..I should probably stop there.

Sal Romano went seven innings, allowed five hits (one home run), one earned run, walked two, and struck out three for the victory over the Braves. He has good stuff and throws mid-90’s, but he’s very young and walks too many batters.

Nicky Delmonico went 2-for-3 with two home runs. Batted clean up. I was told that there was a heckler yelling, “You hit like a girl Nicky!” Scoreboard.

Mike Napoli (1-for-3 with a HR). Napoli has 24 home runs and a .195 average. Napoli is the guy at your poker game that just shoves it all in every hand.

David Peralta (3-for-4 with a HR). This David prefers a bat.

Max Scherzer was scratched due to a neck injury and placed on the 10-day disabled list. Me thinks this was more a case of San Diego sucks-itis. Case in point, Matt Grace filled in for Scherzer and went 4 1/3 innings, allowed two hits, walked one, and struck out one. Matt Grace did that.

Dusty Coleman (1-for-3 with a HR). Who? Exactly. All you need to know is that he’s a 30-year-old shortstop that has a 46% strikeout rate in 50 plate appearances. Why are the Padres playing a 30-year-old guy anyways?

Howie Kendrick (2-for-5 with a HR, two RBI, and a stolen base. Howie’s been straight balling. Six home runs and nine stolen bases. .344 average fueled by a .417 BABIP, though. Timbeeeerrrrrr…..

Hunter Pence (2-for-4 with a HR and a double). I get fidgety whenever I watch Pence play. Good thing I never watch him play.

Brandon Crawford (2-for-3 with a HR). Remember what I said earlier about running into one from time to time? Well, Crawford runs into one as frequently as you see someone actually walking on the street in Los Angeles.