Please see our player page for Kaleb Cowart to see projections for today, the next 7 days and rest of season as well as stats and gamelogs designed with the fantasy baseball player in mind.

One super quick word about the top 20 2nd basemen for 2019 fantasy baseball and all the 2019 fantasy baseball rankings, each ranking appears insanely long and it is, but I imagine in a lot of leagues guys won’t have eligibility, because I’m using the extremely lax Yahoo position eligibility.  Without further ado because this post is longer than the combined length of the Gutenberg Bible and Steve Guttenberg’s IMDB page, I mention where tiers start and stop and all projections are mine and cannot be reproduced without the express written consent of Major League–Damn, I’m being told by Major League Baseball I did not have express written consent to use their warning.  Anyway, here’s the top 20 2nd basemen for 2019 fantasy baseball:

This draft is a crock pot vs. a microwave.  A love sesh vs. a ‘hold the moan.’  A nature hike vs. “I’m gonna sit in the car as we drive past some mountains.”  Guys and five girl readers, it’s a slow draft.  This slow draft took about fifteen days, 18 hours, four minutes and–okay, only a lunatic counts seconds.  Not almost 15 days of straight drafting, mind you.  I don’t need to ice my clicky finger.  It’s five minutes of drafting, twelve hours of waiting.  It does allow you to second-guess your picks.  Actually, more like triple-guess.  (Who are we kidding, you quadruple-guess, fiveruple-guess, sextruple-guess, ochocinco-guess your picks.) For those not in the know, it’s a weekly, 15-team, two-catcher league that lasts for 50 rounds and there’s no waivers.  Anyway, here’s my NFBC draft recap:

If you hail from Central New Jersey, sorry. I didn’t mean to get your hopes up. Albert Pujols does not represent the 609. If you are a Ludacris fan, sorry. Pujols may or may not have garden hoes in different area codes, but I can neither confirm nor deny it. Rather, Pujols slugged his 609th career home run Friday night. It doesn’t matter that it came off Jeremy Hellickson, who’s allowed the 14th-most home runs this season, and is already the 439th-worst of all time. I was going to go on an epic rant about how all the stories are focused on the fact that he’s tied with Sammy Sosa for the most home runs by a foreign-born player. Who gives a flying F where he was born? Then I started thinking, I wonder which player born in Los Angeles has hit the most home runs. Yet again, I’ve managed to stymie myself. Anyways, who cares that Pujols has a triple slash of .229/.274/.374 with an ISO of .144. Let’s just celebrate the great career he’s had and send him off into the sunset after this season. My self checks to make sure this is his last year…

Because I am always late to the writing party, I figured why not just add another Bryce Harper column, but with a Michael Taylor happy ending.  So what’s-his-face got hurt and now Mike Taylor returns from the DL to save the day.  Gone one day and BH is now what’s-his-face.  It sucks, but injuries happen.  That is why waivers and free agent pools exist.  So before Taylor inured his oblique in early July, he was on a torrid pace that was making him an asset for fantasy.  Now what capabilities will he have with that injured oblique?  Since this is the SAGNOF report, we only care about one thing.  Increasing his SB total from 10.  The thing in his favor is that the Nationals lineup is going to change slightly.  Because of the absence of “some guy”.  Small ball and base-to-base stuff still wins and it may have to happen without a middle of the lineup thumper (besides Zimmerman).  I can’t believe I just called him a thumper, well… suspend disbelief for a minute and just assume I didn’t mean it.  Taylor may take a few days to get into the swing of things but Bryce isn’t walking through the door anytime soon, so at-bats and top of the order stuff are coming. Happy SAGNOF’n! 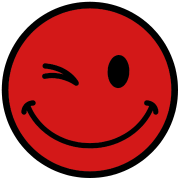 The first thing people notice about him is he looks drunk and half-Asian.  He was throwing back soju and partying in an 8×10 room with three other people singing karaoke?  No, siree!  Or, no Siri, if a female computer is reading.  Next, you might wonder why the big grin.  He doesn’t have a body, ears, hair, arms, anything but a head really, so how can he keep such an upbeat attitude?  Well, let me put it to you this way, maybe it’s a body, ears, hair, etc. that bums people out.  You never thought of that, did you?  Okay, I’m being silly, but it’s Friday.  By the way, the other day, I realized that the days of the week MTWTFSS have WTF in the middle of them.  Mind –>blown.  So, with Schebler DL’d for an indefinite period of time, Winker has taken over right and started batting 2nd.  His power was goofy low in the minors this year (2 HRs in 85 games), but he doesn’t strike out, does walk and could hit .290.  I know, a lot of good that does with diddly poo on power, but he has homered twice this week, and did have more power before this year in the minors.  I’d grab him in all leagues to see if he found his stroke, even if we’re not sure what exactly he’d be stroking with.  Is that why he’s smiling?  Anyway, here’s some more players to Buy or Sell this week in fantasy baseball:

The Book of Job says, “We will send out at least one email a day to all your contacts whether you like it or not.”  Shoot, I immediately see what I did wrong there.  I Googled for a Bible quote, and accidentally got an employee handout from LinkedIn.  Big bad on me.  Yesterday, Zack Godley went 6 IP, 0 ER, 5 baserunners, 5 Ks, ERA at 2.86, with this start coming in Wrigley.  *gulps*  Maybe Godley isn’t an overstatement.  His peripherals are gorge too — 9.2 K/9, 2.8 BB/9, 3.23 xFIP.  Throwing 92+ MPH with a mix of four pitches, and mostly going to Dazzletown with the curve being the pony killer (totally a saying!).  “I made you glue!” which is what I shout trying desperately to make “pony killer” a saying.  Oh, and all of it is coupled with a 56% ground ball rate.  That would be the third best in the majors if he qualified.  When there’s nary a starter in sight with a decent ERA, Godley’s otherworldly.  Anyway, here’s what else I saw yesterday in fantasy baseball:

Finally, things are happening! Wait, an exclamation point in the title, and to close the first sentence of this post?? Feels a little desperate, but maybe a little desperate is just what I’ve been… desperate for some intriguing, consequence-inducing major league baseball transactions, that is. And sure enough, some actual interesting major league baseball trades and moves are happening, trades and moves that have actual interesting implications in fantasy, hence my inability to refrain from the exclamation points. It’s a frustrating time of year if your team(s) are already out of the hunt, but if you have even one league where you’re still in it (or a keeper league where moves you make now affect your team’s future), then it’s worth paying a little extra attention to baseball this week.

When stuff goes down, the effects tend to be magnified in the world of NL-only, AL-only, and other deep leagues. A rock thrown in the ocean might not even be noticeable, but the same rock tossed into a tiny pond can make quite a series of ripples. And so it goes with trade implications in the deep-league world – one crummy closer getting traded to a new team to become a set-up man on another can set of a series of player value changes, waiver wire activity, and FAAB pickups that might make what proves to be a make-or-break difference to your pretend squad of real-life major league baseball players. A minor league promotion/demotion can give you or taketh away from you a player that can make an awfully big difference to you fantasy team – there’s still a lot of time left, after all. Keep your head in the game, check your preferred online sources of information a little more often, and don’t be the one to miss out on a move that could ultimately cost you a fantasy title two months from now. (!!!)

On Dancer!  On Prancer!  On–Oh, I didn’t hear you come in.  Welcome, reader!  Grab some egg nog and brandy it up to the fire.  You look festive.  I love that Rudolph tongue ring.  That’s the great thing about Christmas, no matter what your interpretation is, it’s all about commercialism.  That’s unless you light the Munenori Kawasaki. The 2017 fantasy baseball rankings are not far away.  Right now, January Grey is throwing darts at a board to figure out where to rank Jay Bruce.  Exciting!   In the meantime, let’s look at the players who have multiple position eligibility for this upcoming 2017 fantasy baseball season.  The biggest surprise from this list?  Marwin Gonzalez played how many games at 1st base?  Hayzeus Cristo!  I did this list of multi-position eligible players because I figured it would help for your 2017 fantasy baseball drafts.  I’m a giver, snitches!  Happy Holidays!  I only listed players that have multiple position eligibility of ten games or more played outside of their primary position.  Not FIVE games at a position, not six, definitely not seven. Ten games.  10, the Laurel & Hardy of numbers.  So this should cover Yahoo, ESPN, CBS, et al (not the Israeli airline).  Yes, Christmas came two days early this year.  Players with multiple position eligibility are listed once alphabetically under their primary position.  This is the only time a year I do anything alphabetically, so I might’ve confused some letters.  Is G or H first?  Who knows, and, better yet, who cares?  Wow, someone’s got the Grinchies, must be the spiked egg nog talking.  Anyway, here’s all the players with multiple position eligibility for the 2017 fantasy baseball season and the positions they are eligible at:

This system is what’s known as a three-bagger. You’ll need one brown paper bag for its head, one brown paper bag for your head, and a third brown paper bag handy in case one of the two paper bags currently in use happens to rip. Sean Newcomb was a lefty arm that would have easily topped this list if he hadn’t been traded to the Braves. Sad trombone. The Angels had a first round pick in 2015 (26th overall) but used it on Taylor Ward, a glove-first catcher with pretty limited fantasy value. All in all, you’re going to have a tough go finding prospects worth your time in shallower formats. Some of the players listed might not even be worth your time in really deep ones. And yet together, hand in hand, we march on…