Sometimes you ask and you shall receive and in that vein, I begin this month’s Razznasty update. Now I know the two questions you’re asking, what did you ask for and receive? And which vein? First, it’s the main vein, you know the one in the middle…. Secondly, I asked our very own Hippo in the bush Matt Truss to make a push in the standings over the course of June so I could name the next update “Can’t Truss It”. Done and done. I told Mr. Truss-ah Truss that I’d dress as Flavor Flav from this video while I wrote it. Truss, that I held up my end of the bargain, picture me decked out in white tuxedo with top hat and Batman glasses. Unfortunately I can’t share with all of you due to a shortage on the correct cartridges for my vintage Polaroid Sun 600. Sorry boys, and whatever number of girls are reading this year. I believe we were up to five, but we might have lost a few after the Jose Canseco interview. There’s nothing that upsets the ladies more than invasive questions about Madonna’s early 90’s sperm brokering. Enough of the bollocks, onto the Razznasty update for June. Dynasty Baseball Leagues at their finest.

For the third month in a row, Mentok the Mind Controller is holding the top spot in the table. Unlike previous months, he has some direct competition on his tail. With the Truss lead Hippos lying in wait, it’s possible we could be talking about a new leader come August, but for now the mind stealing judge sits in the birddog seat. What was once a 7 team race, has whittled to 5 teams within shouting distance, with two clubs needing a push to get into the race. The aforementioned Hippos now sits at 120.5 points, jumping 15 total points in the standings. Commissioner Yes Cheese has dropped 6 points month over month, but still remains very much in the race with 111.5 points in a third place tie, with the dynamic off-season addition Raskals. Bringing up the rear of the contenders is Razzball regular Shill Team 6, who’s eminence has been on display all season. As we enter July just 16 total point separate the top 5 teams. Sitting in standings purgatory are the Nick the Dick led FreshPrince OfHellsLair with 101 points,  recently added manager Alice Sweet’s Tomatoes, who’s done a great job of rebuilding his squad on the fly, with 100.5, and former Prospector Mike, who made a nice month over month gain of 15 points, with a total of 96. The largest month over month point increase belongs to resident bullpen expert Smokey, as his Smoke Show squad gained 18 total points over June, and is a few hot weeks away from entering the competitor conversation. As for the rest of the standings it’s made up of full on rebuilders and rebuilding teams just jumping into the process, like Nightpandas, and this month’s biggest point loser the J-FOH led Epic of Goodfoldamesh. All in all it’s been a great month of action, and one of stabilization after some managerial and administrative changes in May. I for one can see a strengthening among the managers, and an uptick in activity. 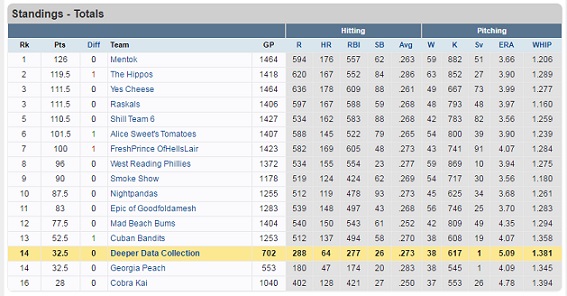 Mentok adds an established closer in the midst of a renaissance and J-FOH adds some prospect pop with Olson. The Hateful one is banking on a return to form from the once promising A’s farmhand.

A win now move for AST that still has an eye toward the future, though he can’t be too happy with the timing of Colome’s injury, and Grichuk’s demotion. Still a risk worth taking. Cobra Kai adds a high pick, an up and coming utility player in Ramirez and one of my favorite spec power bats in Bobby Bradley.

Another win now move from AST, that took place mere minutes after his trade with Cobra Kai. Not sure I love this move from the NP side but he has gained in the standings, and I can appreciate the need for depth. I suppose it all comes down to how you view Chatwood, Inciarte, and Mengden.

Thanks for reading and a BIG AIRHORN SALUTE  to my Razznasty leaguemates.