Please see our player page for Daniel Palka to see projections for today, the next 7 days and rest of season as well as stats and gamelogs designed with the fantasy baseball player in mind.

For some of you too young to remember (ya know, all of you 4-year-olds reading a fantasy baseball blog), Jose Reyes sat out after a 1st inning single in order to win a batting title in 2011. A weasel move if there ever was one. It’s like sleeping with Kate Hudson, Kate Upton and Kate Beckinsale then declaring you’re off the market for life because you’ve got the Triple Kate Crown. Not even trying for Kate Bush, Kate Gosselin or a Kate Spade handbag. You sold yourself short, just like Jose Reyes. Well, yesterday was, well, have I said ‘well’ yet, well, um, well, Mike Minor (8 2/3 IP, 5 ER, 12 baserunners, 9 Ks, ERA at 3.59) got 200 Ks on the season. He did. There’s no denying it, but here’s the path he took: He gave up five runs, didn’t look great, was at 117 pitches and came out for the 8th inning because he needed one more K for 200. Much to his chagrin, he threw a 1-2-3 8th inning on three pitches. So, would he come out for the 9th? You betcha, home slice! Skullduggery was afoot! He got another out, then a two-strike count to Chris Owings, when Owings popped up to Ronald Guzman in foul territory. Guzman, knowing Minor needed another K for 200, dropped the pop-up and his dugout cheered. Baseball:  team sport.  Then, on the next pitch, he struck out Chris Owings and got his 200th K on an 86 MPH winded-as-all-get-out fastball that was called a change with an eye roll on the 126th pitch. So, does this make Minor as bad as Reyes? Much worse? Or better because he was at least trying to do more? No one will ever be as bad as Jose Reyes! Anyway, here’s what else I saw yesterday in fantasy baseball:

Yesterday, Jose Berrios continued his 2nd half slide, going 5 IP, 6 ER, ERA at 3.78. His ERA in the 2nd half is 5.37. That’s…uh, what do I call this, thesaurus? Synonymous Rex? No, I’m asking for another word for bad, not for another word for thesaurus. Ooh..What’s this, an ad for a thesaurus film festival? Pulp Fabrication followed by Schindler’s Menu? Very provocative! Saw recently at another site an article dated late-June for how Berrios could be the AL Cy Young.  *makes Michael Scott grimace face* His BABIP in the 2nd half is .354 (up from .276) and his LOB% plummeted to 66% (from 78.3%), while his Ks skyrocketed to 10.2 K/9 (from 8), and his walks went the wrong way too, which is up from 1.8 to 3.3 BB/9. It’s simplistic to say he’s missing out of the zone. Which is why I’m going to say he’s also missing in the zone. He’s throwing everything either off the plate or dead center. This all feels fixable for 2020, but there’s no time left and you need to move on in shallower leagues. Now, excuse me, I’m going to take in The Shawshank Refunding and Batfellow in a twin picture show. Anyway, here’s what else I saw yesterday in fantasy baseball:

Opens an envelope, and, inside, is an invitation.  “Wow, what gorgeous calligraphy.  Someone took their calligraphy class at 8 PM every Wednesday for six weeks at a local college very seriously.  Patrick Bateman would be jealous of that raised font.”  Reading, “Please join us, the Tampa Bay Rays, for the Star Mitzvah of Austin Meadows.  On Tuesday, the ninth of April, two thousand and nineteen at twenty-four minutes after two o’clock in the afternoon at Temple Fantasy Tova Those Other Outfielders.  A reception to follow at one of the 37 local Hooter’s restaurants in the Tampa area.  Rather than gifts, please bring Cash.  Our manager, he gets lost.”  How sweet is that.  I wonder if I was invited because I wrote an Austin Meadows sleeper this preseason.  Prolly.  Sound the shofar, Meadows is finally breaking out!  *remains super calm, then screams*  I TOLD YOU!  Yesterday, Austin Meadows went 4-for-5, 2 runs, 4 RBIs and a slam (3) and legs (2), hitting .308.  Hopefully, this is the start of the big things I imagine for him, and, finally, he becomes a man.  Anyway, here’s what else I saw yesterday in fantasy baseball:

We’ll be focusing mostly on the Main slate today, which is a 7:05 PM ET lock, but I’ll be sure to sprinkle in an afternoon play here and there for those of you who like that sort of thing.  Both slates feature a tidy six games. The Main slate also features everyone’s favorite, Coors field! When trying to squeeze in those Coors bats with their inflated prices, we’ll need to find some cheap pitching and the occasional cheap hitter.  A cheap pitcher I’ll be targeting tonight is Kyle Wright ($6,100).  Wright had a fantastic spring and won the starting gig over preseason favorite for the spot, Touki Toussaint.  That’s nothing to shake a stick at but Wright stumbled out of the gate. I’ll chalk that “meh” first start up to nerves and starting your first career game in the hostile city of Philadelphia.  Five walks in four innings is pretty rough but that’s more walks than he had his entire spring training. Tonight we’re out of the band box in Philly and into home field advantage against a much weaker opponent in the Marlins.  I mean, just look at that lineup…bleh. I like Wright and hope I’m not wrong tonight!

So, Rudy says to me, “You should get into a Best-Ball league?”  And I replied, “Is that a fantasy league where everyone drafts in blue Polos like you work at Best Buy?”  Then I saw those three little dots like he was typing something, then they disappeared.  Then I saw the three dots again, and, alas, they disappeared again. Finally, he responded, “You don’t think that do you?”  After googling what Best-Ball was, I replied, “No, jokes, man, jokes!”  So, I got myself in my first Best-Ball league.  Everyone likely knows what it is, but, if you don’t, it’s when you draft a team and the computer manages it for you by choosing who are the best players, and you get those stats.  It’s basically one fantasy league removed from the robots taking over and killing us all. Drafting with me in my league was Elon Musk, Issac Asimov–Okay, I keed.  Anyway, here’s my NFBC Best-Ball, Points League, 10 team draft recap:

We (me) have gone over the catchers, 2nd basemen, shortstops and 3rd basemen to target, cause I have to do everything around here!  Look at me, throwing shade like a beach umbrella!  That makes sense…if you don’t think about it!  That’s what I want my bumper sticker to say, and then when I step out of my car, I want my clever t-shirt to say it too, “That makes sense….if you don’t think about it.”  How can I arrange my life so this happens?  I need a personal assistant.  “So, it says you worked as Kanye’s assistant and you bought mirrors for nine months straight….”  That’s me checking the CV of my favorite imaginary assistant.  Okay, so this post is all the outfielders that are being drafted after 200 overall that elicit uber-sexy feelings.  Last year, I featured Mitch Haniger, Stephen Piscotty, David Dahl, and Michael Taylor, who I’ve featured every year since 1922, but not this year!  Now, this is a (legal-in-all-countries-except-Canada) supplement to the top 100 outfielders for 2019 fantasy baseball.  Click on the player’s name where applicable to read more and see their 2019 projections.   Anyway, here’s some outfielders to target for 2019 fantasy baseball: 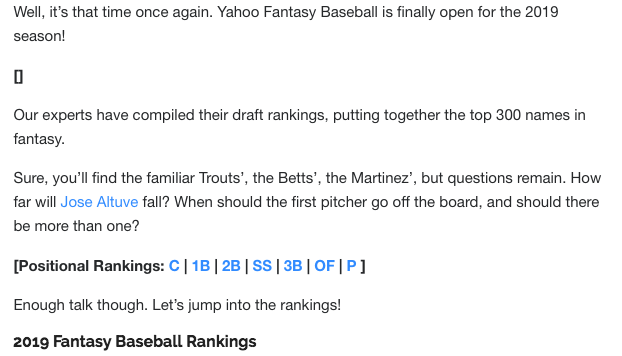 Our 2019 Razzball leagues are in full signup mode. Today, I’m in dress-down mode.  Casually coming for you in the middle of the night, wearing nothing but slippers and a multicolored housecoat that’s half open so you can see the family jewels while I apply my Ambi.  Here’s what Grey thinks about you (repeat 17x).  I’m about to blow my top as I let my aggravation Michael Bublé over.  If you’re clutching pearls like Barbara Bush’s hologram, you’re better off looking at cute pet pics on Instagram, because I’m sharpening my pointer fingers, i.e., the fingers that I use to type!  I am the Fantasy Master Lothario (don’t abbreviate it) and I’ve come for your children!  See, because blog writing doesn’t pay so well, I’ve taken a second job as a bus driver, so I’m literally here for your kids.  Like a baller!  A shot caller!  An “I’m outside of Hot Topic at the maller!”  Now let’s open a window and defenestrate ESPN’s 2019 fantasy baseball rankings.  To the tune of Ice Cube’s No Vaseline:

Everyone is clamoring for a Daniel Palka post.  Don’t even try to lie.  I know how hotly contested this is gonna be.  Fine!  Daniel Palka is a bore, but let’s look at this way.  Imagine everyone lining up every sleeper post ever written.  What’s the number one sleeper post of all time?  The November 1995 sleeper post about Brady Anderson and how a 16-homer hitter was about to hit 50 homers?  A 2010 Jose Bautista sleeper post about how a 13-homer hitter was about to hit 54 homers?  A 2000 Darin Erstad sleeper about how he was about to hit .355?  Richard Hidalgo that same year about to hit 44 homers?  Before each of those posts, they were snoozes too.  Hence, sleepers!  So, before you place your iPhone on the ground with this post open so your dog can rub its ass on Palka, let’s hold judgment.  Anyway, what can we expect from Daniel Palka for 2019 fantasy baseball and what makes him a sleeper?