I’m not a woman.
I’m not a man.
I am something that you refer to as Fantasy Master Lothario.
I’ll never beat you (except in fantasy, that is my pledge).
I’ll never lie (except about how much I once liked Josh Rutledge).
And you’re evil but unless Rougned Odor disappoints I’ll forgive you!
Cause baseball will start 4 2!

*takes a long inhale* Can you smell the freshly cut grass?  No, because it’s still freezing in half the country?  Where’s your climate change now, Al Gore?!  I’m so hyped up about Opening Day, I’m slangin’ bean pies like Ice Cube and picking up and dropping catchers for s’s and g’s!  *goes to my Yahoo fantasy team page*

What would #OpeningDay be without a Yahoo Fantasy sports glitch? My Yahoo teams are like the opening moments of The Leftovers. pic.twitter.com/OeQV1lysno

All right, so I guess I’m not making changes to my Yahoo team on this glorious of splendiferous days.  This day that is more beautiful than Giancarlo’s tukis.  This day that is the most frou-frou of all catchpennies!  Okay, I think my thesaurus steered me wrong on that last one.  On a sappy level, this was a weird offseason, and I’m glad to put the real world in my rearview mirror for six glorious months, and worry about nothing but winning as many fantasy baseball leagues as I can, and helping everyone along the way.  Now who was it again that had Greg Bird (0-for-4, but batted third; yes, you should own him) ranked higher than everyone else?!  Anyway, here’s what else I saw yesterday in fantasy baseball:

Jeurys Familia was given a 15-game suspension for domestic abuse charges filed against him this offseason.  One could say Jeurys was given a 15-day DL trip to Familia, but the DL in this case is Dangerous Love.  If there was anyone predestined for Family Court, it would be him.  Familia was helped by his family’s testimony to Our Commissioner Manfred.  They asked Familia be allowed to go on all Mets’ road trips.  The Mets can sure pick closers.  Let’s see:  Familia; K-Rod attacked his father-in-law and Jenrry Mejia was permanently banned from MLB.  The Mets don’t use a belt with their closer pants.  They prefer suspenders!  This is all an eerie reminder of past Mets violence when Justin Turner tried to help Ike Davis during one of his prolonged slumps.  Any hoo!  Familia will miss about six to eight saves and I’ve moved him down in my top 500 and moved up Addison Reed, his replacement.  Anyway, here’s what else I saw in spring training for fantasy baseball:

I’m being honest here when I say I don’t think you can stop Gary Sanchez.  Someone needs some breaking pitches and chloroform.  It’s a sequel, The Sanchize II:  Homers > Butt Fumbles.  Trivia:  Gary, Indiana is the birthplace of the Jacksons; Gary Sanchez is a Thriller that Ben making balls Beat It, since Imma sing on a song that Michael sung.  Yesterday, Chez Gary went 2-for-3 with his 9th homer in only his 19th game, as he hits .389.  He has 9 homers in 19 games.  Now is when you cackle deliriously.  Paranoid cause you’re a son like Elroy.  You’d be happy as hell if Sanchez was the real deal.  Please, tell me it’s not Maas appeal.  He had 10 homers in 71 games in Triple-A, so I’m all for the hype, but thinking he’s going to be a top 3 catcher in 2017 might be a bit much due to three weeks of play.  There’s no leagues where I wouldn’t own him right now, even if that meant starting him at utility.  Anyway, here’s what else I saw yesterday in fantasy baseball:

Sometimes you ask and you shall receive and in that vein, I begin this month’s Razznasty update. Now I know the two questions you’re asking, what did you ask for and receive? And which vein? First, it’s the main vein, you know the one in the middle…. Secondly, I asked our very own Hippo in the bush Matt Truss to make a push in the standings over the course of June so I could name the next update “Can’t Truss It”. Done and done. I told Mr. Truss-ah Truss that I’d dress as Flavor Flav from this video while I wrote it. Truss, that I held up my end of the bargain, picture me decked out in white tuxedo with top hat and Batman glasses. Unfortunately I can’t share with all of you due to a shortage on the correct cartridges for my vintage Polaroid Sun 600. Sorry boys, and whatever number of girls are reading this year. I believe we were up to five, but we might have lost a few after the Jose Canseco interview. There’s nothing that upsets the ladies more than invasive question about Madonna’s early 90’s sperm brokering. Enough of the bollocks, onto the Razznasty update for June. Dynasty League Baseball at it’s finest.

span style=”font-weight: 400;”>This was supposed to be a day filled with Clayton Kershaw against the Rockies. That was the de facto cash game play, who you paired with him was a game of “Don’t Break The Ice”. Now, with Kershaw down and out with an apparent childbirth (epidural), it’s more like a game of russian roulette picking your starters. So, let’s close up, give it a spin and in chamber one, we’ve got Jaime Garcia vs. the Milwaukee Brewers. I always like to lean towards a pitcher who’s at home, check one in the positive column for Garcia. Another positive is the Brew Crew’s strikeout rate. They currently have the second most strikeouts in all of baseball. Generally, the Brewer’s offense is a bit scary (top 10 home OPS), but get them away from Miller Park and the bats go quiet (5th worst away OPS). Jaime has been a bit all over the map this year, but his 3.54 FIP and 3.74 xFIP (compared to 4.09 ERA) suggest he’s been getting a tad unlucky. For the low price of $7,900, Jaime will be my staff anchor on a night where the options are far from safe. Here’s what else is loaded in our DraftKings six shooter tonight:

New to DraftKings? Scared of feeling like a small fish in a big pond? Well reserve your spot in the 25 Team Razzball Exclusive League set to run Monday July 4th to wet your DK whistle. Just remember to sign up through us before you do. Wanna know what the best part is about signing up with us? The free subscription for the rest of the season to our DFSBot, that’s what! For details on the how to, please visit our Razzball Subscriptions page.

Yesterday, Wil Myers went 2-for-4 and his 11th and 12th homers as he hits .294.  How many posts does Wil Myers have with his post-hype sleeper?  More than the postman at the postoffice marking his post-lunch post-time with some extra postage licking and complaints that they have their postbaccalaureate to sort postcards without postcodes wishing they were postcoital not dealing with postapocalyptic posturing about the postage for the postmortem envelope they pulled out of the garbage that now looks postmodern.   Nah’mean?!  That’s 14 posts, kid!  Damn, I should be on Def Poetry Jam.  I know you wish there were some sleepers you could unswallow, but Myers has been the one shining light in a sea of brown, cloaked Padres.  This could be the last year that he’s even a question mark and not owned from start to finish.  Anyway, here’s what else I saw yesterday in fantasy baseball:

Despite my best efforts, I can no longer avoid writing about this week’s most added player, Cincinnati Reds outfielder Adam Duvall (68.9% owned; +45.8% over the last seven days). It’s not that I don’t like him. I actually considered writing about him a few weeks ago. After deciding to go in another direction, that opportunity came and went quicker than a patron at a pay by the hour hotel. Everyone seemed to jump on the Duvall bandwagon, and for good reason. Over his last 14 games, he’s smashed 9 homers to go along with 14 runs, 19 RBI, and a .268/.293/.786 triple slash line. If you want to go back a bit further, he’s produced a 24/14/30/1/.292 line since May 3rd (31 games). Those are numbers that’ll have his fantasy owners frequenting the hourly hotels on a regular basis. While he’s unlikely to maintain this blistering power pace for the rest of the season, Duvall hit 35 homers between AAA and MLB in 2015, and 30 homers across those same levels in 2014. The power is very much for real. The strikeouts (29.7% K%) are likely to keep his average in the .250 range, and while his on-base skills (.327 or lower OBP at every stop but one since 2012) and speed (10 stolen bases since 2013) are severely limited, 35 homers appears to be in his wheelhouse. Think of him as the NL version of Mark Trumbo. In competitive leagues, Duvall is likely long gone, but if his owner is interested in “selling high,” it’s worth exploring a trade if you’re looking to add some power.

Here are a couple of other interesting adds/drops in fantasy baseball over the past week: 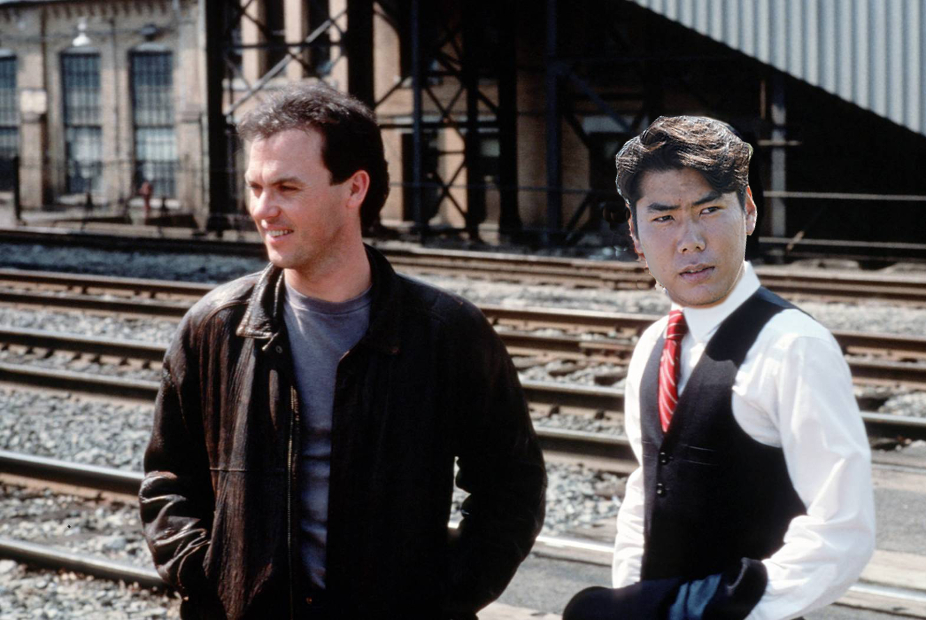 If you walk out that door, you’re going to miss a great comeback. Hunt Stevenson kicked ass. And even though he didn’t actually meet the goal of 15,000 cars So Yamamura was so impressed with Hunt’s efforts that he declared his team successful. Just another example of a great 1980’s movie. Modern technology be damned, the 80’s was awesome. Speaking of awesome, let’s talk about the third baseman you’re going to wish you stashed on your DL if you don’t own one of Manny Machado, Nolan Arenado or Josh Donaldson. I refer to them collectively as the “Big 3B”. And no, there is no “Big 3A”. There’s the “Big 3A-holes”. That would be Justin Upton.

The amount of elite pitching available on Tuesday is absurd. First off, it’s Kershaw Day and that means you have to decide whether you want to take roughly 28 percent of your salary and invest in the only sure thing on the slate. Other attractive options include the head-to-head matchup between Max Scherzer ($12,700) and Noah Syndergaard ($11,400), both of whom should receive your exposure in selected spots. While I love all three pitchers on Tuesday, it’s hard to pass up another ace in Madison Bumgarner. Everything about this matchup is so perfect that MadBum will probably give up nine earned runs in 0.2 innings pitched and completely tank your line. JUST KIDDING! Bumgarner is safe and will be a chalk cash game play, but that’s okay. All we care about is results. This could very well be the first game of the season where Bumgarner goes the distance. Even if he doesn’t the strikeouts will be plentiful and a win seems likely.

New to DraftKings? Well reserve your spot in the 25 Team Razzball Exclusive League set to run Monday May 23rd to wet your DK whistle. Just remember to sign up through us before you do. It’s how we know you care! If you still feel helpless and lonely, be sure to subscribe to the DFSBot for your daily baseball plays.