Sorry if the title is a little NC-17. NC being North Carolina, baby! A little too sour? Blame the vinegary sauce, like a middle-aged man at a tailgate party, you over-dabbed. So, Jacob deGrom is the greatest pitcher of all-time. Yesterday, he went 3 IP, K’d eight and got one more by fly out, lowering his ERA to 0.54. The only problem is the Mets’ training staff is the world’s worst. World’s worst trainers are in, conveniently enough, a train going 170 MPH. The world’s best starter is on a mound going 101 MPH. At some point, they’re going to intersect and bad things will happen. On May 9th, it was right side discomfort. On June 11th, it was right flexor tendinitis. On June 16th, they’re saying right shoulder soreness. Can we just all assume they have no idea? Jacob deGrom will be great, if healthy, but it doesn’t seem like that’s possible right now. About the only thing he has in common with most starters is they’re injured. By August, each team is going to have one starter, two probables and two doubtfuls. By September, it’s going to be one starter and five scarecrows in the team’s jersey, and one scarecrow is going to pull his elbow tendon by mid-month and the team is going to say he’s day-to-day. Anyway, here’s what else I saw yesterday in fantasy baseball:

Dominic Smith – 1-for-3, 2 RBIs and his 6th homer, and 2nd homer in the last three games. About two weeks ago, I grabbed Dominic, after applying for consent through a lengthy process at the DMV, and then he went 0-for-20 on my watch, which wasn’t great, but now he’s out of it and hitting again.

Kevin Pillar – 2-for-4, 2 runs, 2 RBIs and his 5th homer, hitting .250. I can barely pronounce “junk” so I’m not one to talk, but it feels wrong to have Pillar and Villar (0-for-3, 8th steal) on the same team, and wildly different ways their names are pronounce. Sorry, Pillar needs to start going by PR, those are the rules.

Jesus Sanchez – 1-for-4 as he hit third. Love to say I’m incredibly encouraged by Sanchez hitting third, but the Marlins’ lineup looks a bit like Mattingly was pulling names out of a hat: 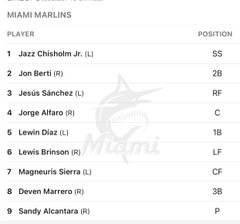 Johan Oviedo – 7 IP, 0 ER, 6 baserunners, 4 Ks, ERA at 4.58. I’m once again asking you to look at that Marlins’ lineup. For what it’s Cronenworth, Streamonator doesn’t like Oviedo’s next start.

Mike Moustakas – Pulled from rehab assignment with renewed soreness. Damn, that is the Mostsuckass.

Gerrit Cole – 8 IP, 2 ER, 5 baserunners, 4 Ks, ERA at 2.31. Four strikeouts?! WHAT’S HIS SPIN RATE?! *leans in on Statcast web page, accidentally knocks over computer* Damn, that sucks. Guys and five girls, like with anything baseball related, we might need some larger sample sizes. His spin rate was decidedly down though, and he sounds like Kermit the Frog right after Miss Piggy left him for George Clooney.

Wait, is this audio doctored or is this really Gerrit Cole? pic.twitter.com/AnUFdwEDyt

Gary Sanchez – 1-for-2, 2 RBIs and his 10th homer, and his 4th homer in the last six games. Screech! That dirty Sanchez got hot! RIP Dustin Diamond.

Marcus Semien – 1-for-4 and his 16th homer. After being one of his biggest fans for years, Semien’s gonna hit 35 homers and be a top 15 player overall the one year I don’t have him anywhere. Haha, I suck.

Cavan Biggio – 1-for-2 and his 6th homer, and third homer in five games. Cavan returned from the IL the hottest he’s been all year. So there is hope for Cody Bellinger? Tell me, you giant soothsayer in the sky!

Ross Stripling – 6 2/3 IP, 2 ER, 5 baserunners, 9 Ks, ERA at 4.64, and four of his last five starts have been quality-ish. Maybe not Quality Starts, per se, but you know what I mean, and Streamonator loves his next one.

Ryan Mountcastle – 3-for-5, 4 RBIs and his 9th homer, hitting .249. He’s struggled mightily this year, which is what someone says who hasn’t looked at Alec Bohm’s stats.

Aaron Civale – 5 IP, 5 ER, ERA at 3.48. If you listened to the last podcast, Podcaster Geoff said Civale was his biggest pitcher who he expected regression from. I say, boy, that was fast, while playfully spanking my own ass.

Brady Singer – Left with shoulder tightness. There’s a story, of a lovely lady, who had three girls and a bad shoulder…That doesn’t rhyme at all what am I doing here?

Adalberto Mondesi – 1-for-4 and his 3rd homer, hitting .345. At least when he’s healthy he hits! Yes, I’ve written the name Cody Bellinger on my hand, and am farting on it.

Salvador Perez – 2-for-5, 2 RBIs and his 17th homer, hitting .287. On the Player Rater, it’s Salvador Perez and then hundred or so spots later another catcher or two, then about 200 slots after that another few. To say Sal P. is out-classing all other catchers is like saying Steven Spielberg is more talented than his brother Morty.

Zac Gallen – Will be reinstated from the IL today. Hunh, that seemed to come out of nowhere. Hopefully, it’s a good out of nowhere and not a “Gallen lasted two innings in what was his final tuneup for Tommy John surgery.”

Buster Posey – 3-for-4, 3 runs, 3 RBIs and his 12th homer. If you were wondering who was right below Salvador Perez, it’s Posey. If you went Perez/Posey in a two-catcher league, you are killing the league, and have the most 90s indie film cred.

LaMonte Wade Jr. – 2-for-6, 2 runs and a slam (4) and legs (2). The Giants are having one of those charmed years where they could trade for Franchy Cordero, and make him what I thought he was.

Bailey Ober – 4 IP, 0 ER, ERA at 3.71. Ya know what makes for a great starting pitcher rookie showing? When the pitcher is facing the Mariners. Here’s what I said previously, “(Ober) stands 6’9? and he might be the least impressive 6’9? I’ve ever seen. Christall Young looks like John Cena compared to Bailey Ober. His fastball was 89 MPH, and his wingspan takes the ball halfway to the plate, and it was like the hitters were using a mechanical tee. Ober had me reaching for the remote control.” And that’s me quoting me!

Nelson Cruz – 1-for-5, 3 RBIs and his 14th homer. Cruz thinks all this nonsense about sticky balls is hilarious. When he started playing baseball, the balls were made out of stone.

Ryan Jeffers – 2-for-4, 2 RBIs and his 4th homer, and 2nd homer in three games. Who needs Mitch Garver?! Well, tailors who make their money lifting inseams, for one.

Clayton Kershaw – 6 IP, 2 ER, 9 baserunners, 9 Ks, ERA at 3.36. I said last week to sell Kershaw because if the crackdown happens, and he can’t use anything, he’s not going to want to jeopardize his Hall of Fame career legacy for a few months of baseball. It’s sounds crazy, but I 100% stand behind that.

Zack Wheeler – 6 IP, 0 ER, 9 baserunners, 6 Ks, ERA at 2.15. Mean’s while, Wheeler’s headed for a Cy Young, assuming baseball writers get off their high horse, and don’t say some nonsense like, “I can’t be sure if Wheeler’s noticeable tanlines were him trying to add extra spin or avoid melanoma.”

Willi Castro – 2-for-5, 2 RBIs and his 6th homer, and his 2nd homer in three games. Hot schmotato alert!

Ramon Laureano – 1-for-5 and his 12th homer, as he was activated from the IL, but still on my fantasy team’s gee-dee IL. Come on, return from the IL, give us a day to get you back in the lineup per Kevin from ESPN, then homer. Is it too much to ask?

Griffin Canning – 5 IP, 2 ER, 5 baserunners, 2 Ks, ERA at 5.07. If you pick him up, Canning will blow up in your face like he just came from Spencer’s Gifts and is filled with coiled snakes. By the way, what’s up with Canning, Manning, Dunning…What’s their *pinkie to mouth* gerund ball rate?

Jose Abreu – 1-for-5, 2 RBIs and his 12th homer, hitting .252. Rostering the Mickey Mouse MVP Abreu has been super yawnstipating. When Brandon Crawford is out-pacing you, it’s time you stepped up yo’ game!

Andrew Vaughn – 3-for-5, 3 runs, 1 RBI, as hits third. Comatose Since March Fantasy Baseballer wakes, “Andrew Vaughn’s hitting third! Oh em gee! In front of Eloy and Abreu, and behind Luis Robert and Madrigal?! What a boon for Vaughn’s value! A boon I tell ya! Right? Guys, why are you all backpedaling out of my hospital room?”

Yan Gomes – 2-for-4 and his 7th homer, and 2nd homer in as many games. Maybe he can give Juan Soto some pointers on the long dong?

Kyle Muller – 1 IP, 2 ER, as he was called up from Triple-A and might fill-in for Tucker Davidson. I’d ask Prospect Itch for the Muller report, but who wants to read about a perfect phone call? Muller has shown himself to be wild, and we can’t find an AG to rein him in, which is why I asked for Sessions’s resignation. Kidding aside, his command looks like it will lead to roofies, so avoid. (I said kidding aside and mentioned “roofies” in the same sentence. Ha, okay, Grey!)

Dansby Swanson – 2-for-5, 2 runs, 3 RBIs and his 11th homer, hitting .237. One benefit I get from answering couple hundred questions a day is I get to see what people think of players. My sense is you can buy Swanson low, and I would.

Garrett Richards – 4 IP, 4 ER, ERA at 4.36. He said he couldn’t grip the baseball last night, and could only throw fastballs. He said, and this is all 100% true and not me goofing, he might have to learn a new pitch. MLB is starting to feel like the WWE. What is reality?

Kyle Tucker – Hit the Covid IL. He’ll be out anywhere from one day to “the timetable for an oblique.”

Jose Altuve – 2-for-4 and his 14th and 15th homer, and, like 25th homer in two weeks. Altuve’s on one of those all-time highs, like him standing on a phone book.

Myles Straw – 1-for-4 and his 1st homer, hitting around .450 in the last week. The Straw man has no relation to the scarecrows who will be in your favorite team’s September rotation.

Chas McCormick – 2-for-4, 3 RBIs and his 7th and 8th homer, and 3rd homer in three games. Already gave our Patreon’s Friday’s Buy/Sell column, but will have to add McCormick. See, I uploaded it on Wednesdays, then I update it along the way.

Eli White – 2-for-3 and his 1st and 2nd homer. He doesn’t play every day, but a multi-homer game goes a long way to a schmotato.

C.J. Cron – 1-for-4, 2 RBIs and his 7th homer. Remember when people were all gaga-googoo for drafting Cron? You can’t start him in road games. What a bunch of fools. Unlike us smart people who have Cody Bellinger.

Elias Diaz – 3-for-3 and his 2nd homer. Can someone check to see if Trevor Story is still playing baseball?

Ryan Weathers – Optioned to the minors. I’d guess this is them trying to throttle his innings. Gotta Weathers the Storm, Halleberrylujah.

Jake Cronenworth – 1-for-2 and his 7th homer. Elias Sports Bureau said this is the first time two guys homered in the same game who also both appear in Razzball comments in the question, “Cron worth a pickup?”

Trent Grisham – 2-for-4, 3 RBIs and his 8th homer. You ever see Trent’s name and starting singing, “Five hundred twenty five thousand six hundred minutes, this is the seasons of love…?” That’s from the songbook from T. Rent. Meh, who am I kidding, of course you do!