Freddy Peralta – 4 1/3 IP, 5 ER, ERA at 4.40.  Hey, can I leave my Fanta on this counter in this Afghani cave being watched by the shifty-eyed bartender?  Thanks, just heading to the bathroom!  *five hours later*  Why are you weighing my kidney on that Weight Watchers scale?  AHHH!!! ROOFIE!!!

Jonathan Schoop – 2-for-6, 2 RBIs and his 20th homer.  Don’t worry, Craig Counsell will fill out the lineup card for their next game without Schoop starting, while holding the pen in a cockeyed manner.

Eugenio Suarez – 1-for-5, 2 RBIs and his 30th homer.  Who was the Eugenius who drafted him?  This guy with two thumbs wearing the same underwear I’ve worn for two weeks.

Andrew Miller – Hit the DL with an external impingement in his shoulder.  Sounds like an acupuncturist visit gone wrong.  “Is this what it feels like to be a cactus?”  That’s me at an acupuncturist.

Jedd Gyorko – Hit the DL with a strained groin.  “Is that a…groin?”  That’s someone holding up a colander.

Adalberto Mondesi – 2-for-3, 2 runs, 4 RBIs and his 6th homer.  Truth Alert!  I want to write a Mondesi lede, but I also want to save him for my first 2019 sleeper.  Maybe I can do both, but what I say now will only be quoted by December Grey.  “I can formulate my own opinions!”  That’s December Grey.

Danny Duffy – 6 IP, 1 ER, 5 baserunners, 6 Ks, ERA at 4.72.  The Stream-o-Nator liked this start by Duffy, but you have acorns in your pants that are a lot bigger than yours truly if you start Duffy anywhere.

Trea Turner – 1-for-5, 2 RBIs and his 16th homer.  I get the sense people don’t fully love Trea like they should, so I’m bringing out the exhibits.  On our Player Rater, he’s a top 25 player.  Throw out seven pitchers in front of him, and he’s a top 18 player.  Draft a guy top ten and get top eighteen?  Any day of the week and twice on Muesday.

Anthony Rendon – 1-for-4, 2 runs and his 18th homer.  That ball was Rendon’d obsolete!  “I missed my calling…game calling,” said like James Bond.

David Price – Left yesterday’s game after taking a comebacker off his left wrist but only has a contusion, which is lucky since it was an absolute shot like something Ryan Phillipe would do in Shooter.  Gotta say, this show is my new guilty pleasure.  It’s low-key fun, like owning Aledmys Diaz.

Austin Dean – 1-for-4, and his 3rd homer.  I was amped up for this guy last week, but this week that’s fizzled.  Sad story, awful fortune cookie.

Derek Dietrich – 1-for-3 and his 16th homer.  I actually grabbed him for a batty call two days ago and then divine inattention found him still in my lineup.  Now?  I think I’m still going to drop him.  Terrible fortune cookie, mildly awful first person story.

Trey Mancini – 2-for-5, 2 runs and his 20th homer.  Is there anyone hotter right now?  Not to answer, but to ruminate while someone else picks him up in your league.

Kevin Pillar – 2-for-5 and his 11th homer, hitting .258.  I own Pillar in own ragtag league and I was about to say he’s been doing well, but my mind’s playing tricks on me — RIP Geto Boys’ DJ — because Pillar’s been standing around doing nothing recently.

Devon Travis – 3-for-4, 2 RBIs and his 11th homer.  Oh, Lourdes, you better do something fast, because Devon’s coming for your lineup spot.

Josh Donaldson – Sat out of a High-A game with soreness in his legs.  Donaldson’s leg transplant with a guy who drove a motorized scooter around Wal-Mart has backfired big time.

Reynaldo Lopez – 7 IP, 1 ER, 7 baserunners, 6 Ks, ERA at 4.51.  There was some concern that Reynaldo’s fastball velocity was way down early in the game, but he was prolly just nervous playing in front of Big Al, and his velocity went up as the game progressed.  He’s not a start every time out guy, but if the Stream-o-Nator likes him, I could see streaming him.  (Huge vote of confidence there!)

Ryan LaMarre – 3-for-4, 4 RBIs and his 2nd homer.  Whoa, he only plays every three games, so LaMarre had a good game but let’s not get a-Heddy of ourselves.

C.J. Cron – 4-for-5, 2 runs and his 25th homer.  No lie, I think I’ve started him in the league where I own him for maybe five of his homers.  It’s NFBC, so it’s weekly lineups, and every week begins like this, “Cron’s not going to start more than four games is he?”  “Are you talkin’ me?”  Then that devolves into me talking like Robert De Niro in the mirror for a few minutes and I never start Cron.

Lucas Duda – Traded to the Braves to cheer on his new club from the dugout and charge the mound if anyone ever hits Acuña again.  “Duda don’t like!”  That’s Lucas running from the dugout.

Sean Newcomb – 4 IP, 6 ER, ERA at 3.85.  He is a true goat.  Lowercase.  Not that newfangled goat that’s uppercase.  No, Newcomb is a goat like your grandparents meant it.

Johan Camargo – 3-for-4, 2 runs, 3 RBIs and his 14th homer.  Can we get Rotowear to make some Camargo shorts?  Cause I’d rock those puppies like a mudderfudger!

Zack Godley – 7 2/3 IP, 1 ER, 3 baserunners, 6 Ks, ERA at 4.42.  Finally, Zackariness is next to Godliness!  Now do it for the last month and rope everyone into another mediocre year next year.  (He gets the Padres next, so I’d absolutely grab him if he was dropped in your league.)

Hunter Renfroe – 1-for-4, 4 RBIs and his 17th homer, and finally moved to the five hole, which makes so much more sense for Renfroe.  I like him, but a three-hole hitter?  C’mon, doode, you got nothing muffins in your head.

Manuel Margot – 3-for-4, 2 RBIs and his 7th homer.  My promise to you is I will never call another Padres hitter a sleeper ever again, and will make colleges accept Bed, Bath and Beyond coupons for tuition.  I’m Grey Albright, Fantasy Master Lothario, and I approve this message.

Joey Lucchesi – 6 2/3 IP, 1 ER, 8 baserunners, 9 Ks, ERA at 3.59.  He went sideways on the Wonky Highway during the month of July (5.21 ERA), but has slowed that roll nicely in August and is having a solid rookie season overall.  Now please shut him down soon so he doesn’t throw too many IP this year.

Jean Segura – Left early from the game after fouling a ball off his leg.  I once had a foul ball on my leg and screamed until I realized it was my own.

Kenta Maeda – 1 IP, 1 ER and the save.  He gave up that run just in case you were worried Kenley Jansen’s job might not be secure.

Albert Pujols – Will miss the rest of the season.  Podcaster Ralph and I discuss Matt Thaiss on the latest edition of the Fantasy Baseball Podcast.  We could see him now that Pujols is scratching his behind.

Jason Vargas – 5 1/3 IP, 1 ER, 6 baserunners, 6 Ks, ERA at 6.56.  The Mets tweeted out, “This is now the fourth consecutive start Vargas has gone at least 5.1 IP and allowed two runs or less.”  The Mets social media team backing up the cherrypicker!  *gears of cherrypicker grinding*  “Jacob deGrom is 0-0 when he knocks in the Mets only run.”  *gears grind as social media team pulls away*

Todd Frazier – 2-for-5, 5 RBIs and his 16th homer.  Not saying he’s good, but he does have four homers in the last eight games, though he’s batting 6th (while Jay Bruce tries to remember how to hit in the cleanup spot, and Austin Jackson hits third).

Tyler White – 2-for-4 and his 10th homer.  Forget how I said yesterday I wanted Tyler O’Neill, now I want Tyler White!  Or do I want O’Neill?  Or White?!  Ah, Greybot, malfunction!  Need battery re…char…ge.  Kaput.

Dallas Keuchel – 6 IP, 3 ER, 9 baserunners, 5 Ks, ERA at 3.58,  I was staying away from Keuchel in the preseason, but, tee bee aitch, he hasn’t been much better or worse than I expected.  Not returning preseason value necessarily, but by no means has he been awful.  Dallas Keuchel:  Not Awful.

Charlie Morton – Hit the DL.  I bring you, Hot Takes from Previous Commenters: 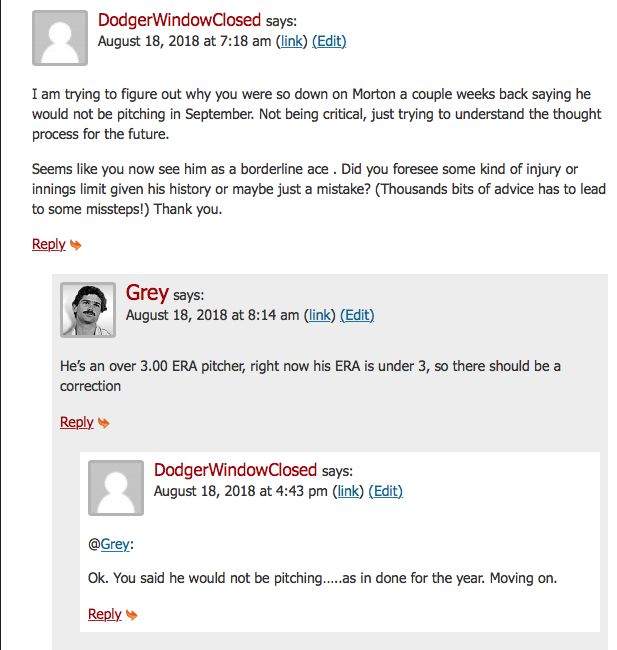