Greetings from beautiful New Jersey. If you say otherwise, as someone born and raised in New Jersey I am legally obligated to fight you with my shirt off. I’m sorry, but I don’t make the rules. Even though I am just here visiting, these laws are still binding. Strange, I know. But true. Very true. Ask Grey if you don’t believe me.

Given how the first 20 weeks have gone, putting two Dodgers pitchers at the top of this list just seems like a tease. We know what is going to happen by Monday, so why do we torture ourselves? If we have learned anything this season, it’s that Dave Roberts hates every single one of us and does not want us to be happy. Luckily, both are owned in 100% of RCLs, so we can safely ignore them without feeling too guilty.

As for value choices this week, Streamonator likes three starting pitchers who are owned in less than 75% of Razzball Commenter Leagues for a positive value. The value choices for this week are:

Now, what really sticks out here is Tyler Skaggs receiving such a high dollar value. Ricky Nolasco and Steven Matz are, let’s face it, whatever. Stream if you will, stream if you won’t. Those two are going to help you sometimes and hurt you others. The Nator likes them (kind of) this week, but they aren’t pitchers you’re going to take home to your fantasy baseball momma.

Skaggs usually isn’t, either, but the Nator loves it some Tyler in W21. Now, the big thing here that could throw his whole article out the window is that Skaggs is on the paternity list. As it stands now, he is still scheduled to start, but babies change everything in our lives, ya know? For the sake of 1,000 words, let’s assume he is going to pitch twice this week and actually help some brothers out. But, on a real level, pay attention to the Twitter machine and those lineup updates. No promises are to be made in W21.

In eight starts this season, Skaggs has been, as they say, not too bad. More importantly, he has pitched better lately. He has allowed three or fewer runs in six straight starts and has lowered his ERA more than a run and a half over that time.

His two starts this week are not great. He has Texas and Houston, but he does at least get both of them at home. Streamonator has him as a Top 5 starter this week, but I obviously dropped him a bit lower. Who are you going to trust, Rudy or me? Rudy has a proven track record for utilizing these tools for impactful results, while I am the guy who told you all about J.T. Realmuto in March last year. WHO. ARE. YOU. GOING. TO. TRUST? 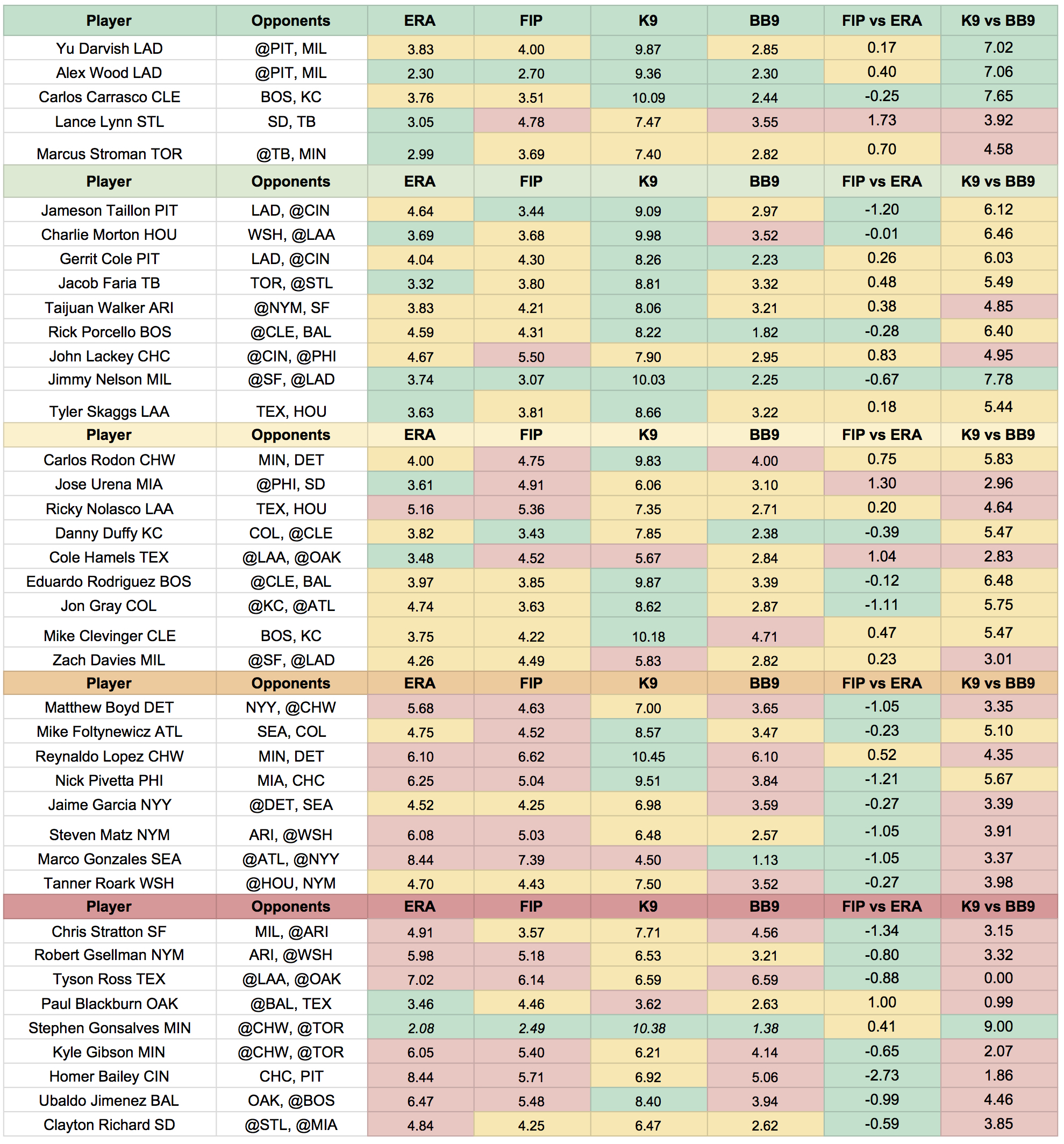 Alternatively, my league allows a 4th RP in lieu of a 5th SP. My option for that would be Cam Bedrosian (league gives pts for Holds, FYI). My other RP are Knebel/Giles/Claudio. Is Cam a better choice than Walker or Ray this week?

I would probably rank them how you have them or pretty similar, and probably not go RP over SP. I might swap Ray and Walker.

I am looking to move up on Saves+Holds…our fifth category in 5×5 roto.

Should I look for SPs or do you like any of these guys?

Nicasio, Rogers, and Barnes would be my top 3.

Paredes worth taking a flier on anywhere (taking Yu’s place)?

mikeMaher
Author
Reply to  The Baconator

Normally I would say no, but can the Dodgers do anything wrong this season?

Clevinger is not making 2 starts, he just pitched 3 innings in his ‘off’ day.
Also, no Patrick Corbin?

Clevinger is going today and Saturday.

Corbin wasn’t on the original lists because it wasn’t clear where Ray was going to slot in.

Does Nelson keep his two starts with Chase Anderson being activated tomorrow?

a. Do you really think Porcello @CLE is advisable? My feeling is he will be clocked by the lefty-leaning bats especially in CLE.

b. Wasn’t Reynaldo injured after his last start? I thought he was removed for an injury (other than to his ego.).

Not guaranteed a second start, but thoughts in Giolito? Thanks for the help all season, Mike!

Thanks! I like him long term but don’t think I would really trust him for ROS

Everything I am reading has him going Thursday. You might be a week ahead of yourself on Ray.

Skaggs was placed on the bereavement list following the death of his grandfather. According to a couple of reports I read he is still set to start on Monday. The bereavement list placement means you have to miss 3 games (Monday is his first available start) but can miss up to 7.

mikeMaher
Author
Reply to  Another Dan

Sorry for the delay. I have been traveling. Skaggs is going tonight.

Curious on your reasoning for Urena as the Marlins two-start arm vs. Straily. Seems to be some conflicting info on different sites but majority have Straily pitching game 1 (which would follow current rotation order) setting him up for the Sunday start vs. SD.

Also expected to see Nola – would he not have a Sunday start against the Cubs?

Looks like it is probably Straily. The doubleheader on Monday likely threw things off a bit for both.