There is a decent chance that the MLB Trade Deadline throws some wrenches into our list this week. Yu Darvish is currently on the list and could very well get traded. He got absolutely rocked his last time out, though, so some owners might be a little shy about throwing him out there for two starts this week. Depending on your team and league format, though, the chances are you should probably send Darvish out there for his two turns this week. He is going to start at least once even if he gets traded, and August is not the time to start second-guessing your squad.

Our focus for this week is Charlie Morton. He is only owned in 49% of RCLs, and Streamonator likes him for a $13.60 value that is partly due to favorable matchups against the Rays and Blue Jays, both of whom are in the bottom eight in team wOBA over the last couple weeks. In his last start out against the Phillies (who are surprisingly in the top eight for team wOBA over the last two weeks), he tossed seven shutout innings with nine strikeouts on just three hits and a walk.

The main difference in Morton this year that has increased his fantasy value is he is striking out batters at a much higher rate than he ever has in his career. His career K/9 is 6.66, but his K/9 in 2017 is up over 10/9: 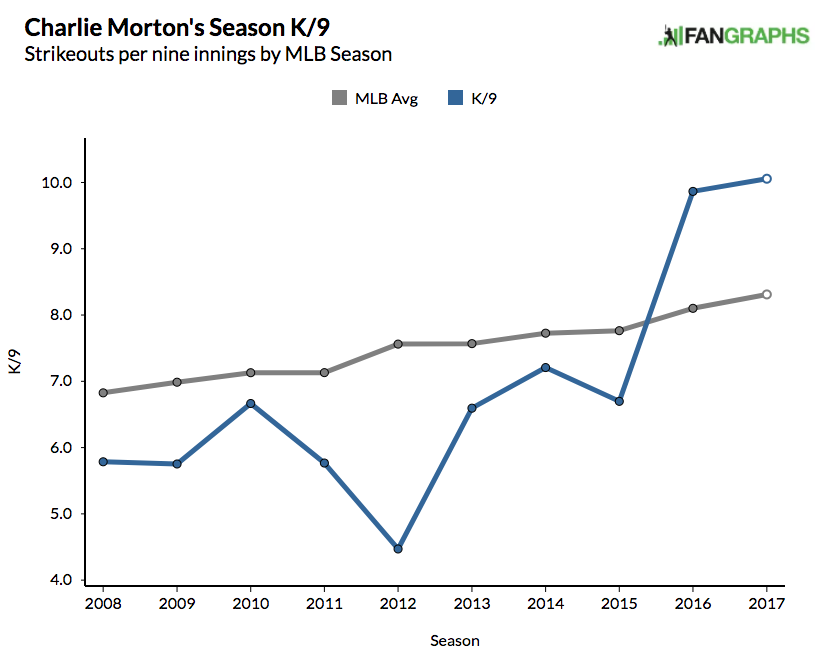 His 2016 K/9 was 9.87, but that was over just four starts. As is expected when you see a spike in strikeout numbers, Morton’s swinging strike numbers are up, too. While he posted a career swinging strike percentage of below 8.0% coming into the season, he is at 10.4% in 2017. 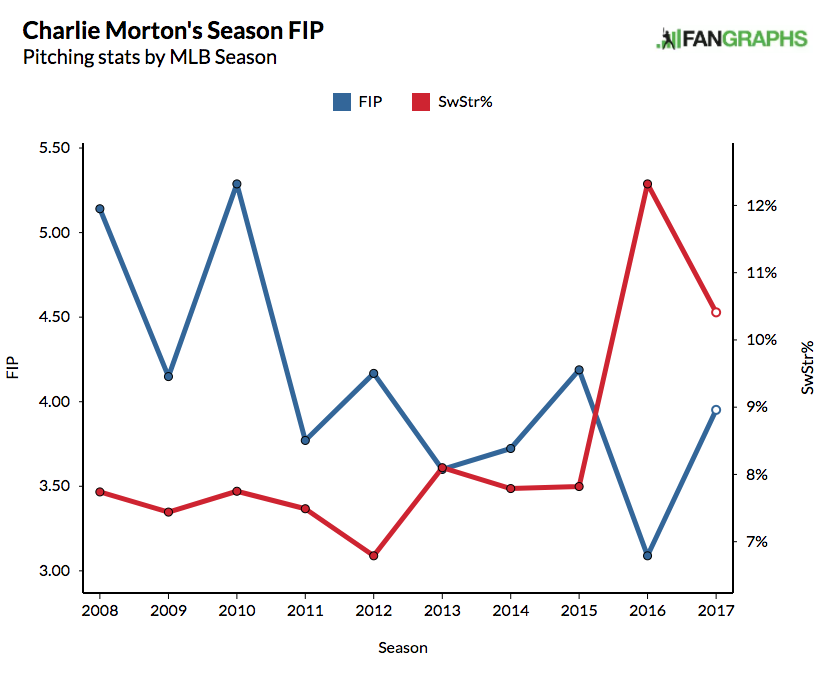 His Hard% and HR/FB% are both up, too, so it is not all roses for Morton this season, but the good has definitely outweighed the bad in 2017, and that should continue to be the case with two good matchups this week. The Astros are going to be without Carlos Correa and George Springer, which is not ideal for his run support, but even without those two they still have one of the better offenses in the league. Not many teams have a Derek Fisher or a Marwin Gonzalez to plug in when injuries strike, so they should be OK. 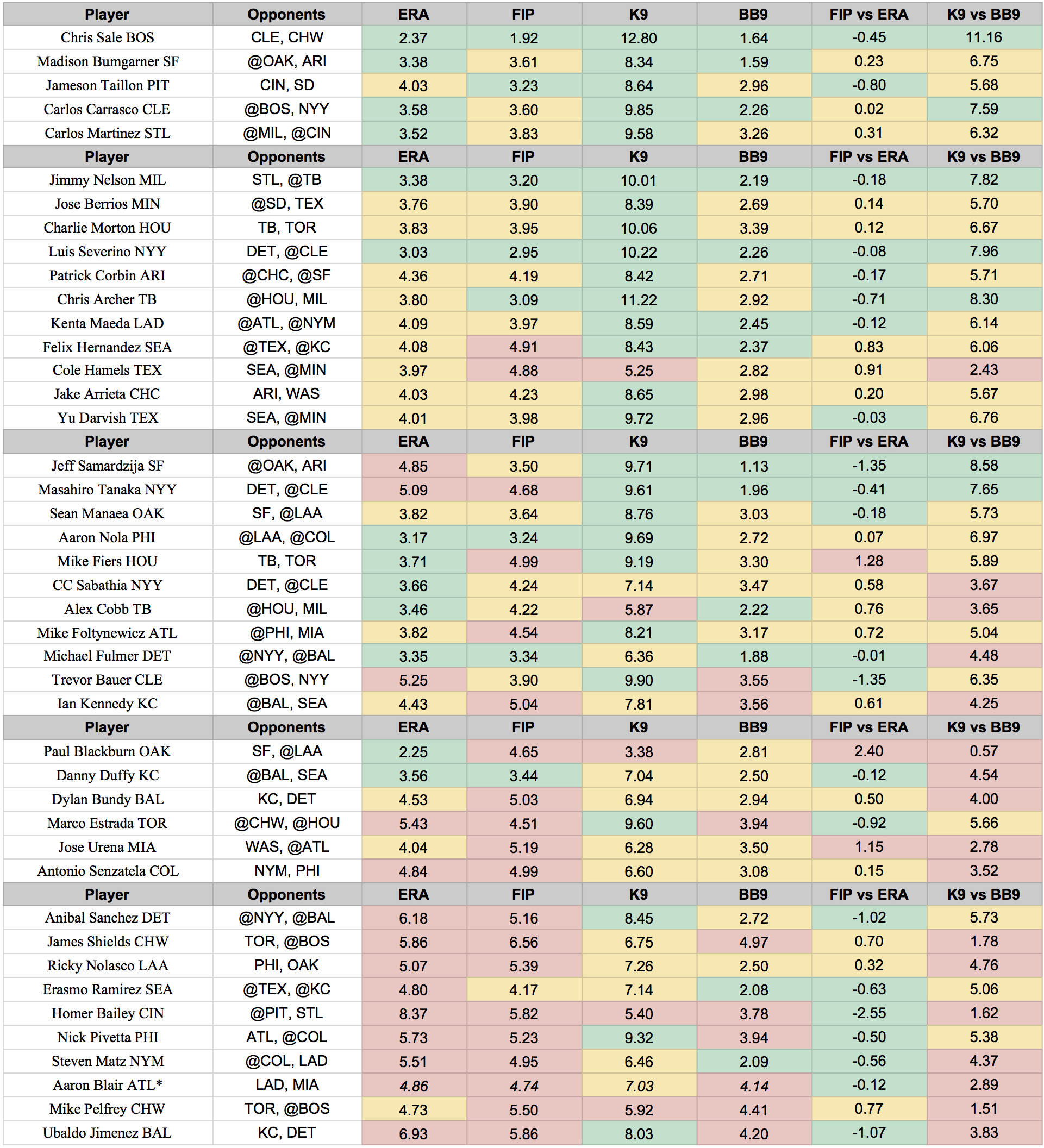 How do you rank Duffy, Clevinger, and Peacock ROS?

I know Peacock may have lost his rotation spot which is unfortunate with how good he has been. Clevinger has been nice. Duffy has been bleh but I don’t know if I can justify dropping him.

I have one streamer spot I was thinking of using on Corbin. But Gausman is also on waivers and would like to add him ROS…who would you dump? Is Neris another drop candidate considering I have Chapman, Norris, and Hand?

I try not to focus too much on the opposing pitcher. Too many variables and also those starts get changed around pretty often. That said, Sale is one of maybe 3-4 pitchers to really worry about. For me, I still take the two Carrasco starts.

Between McCullers Faria & Manea, if you had to start 2 in a quality start & wins league, who do you choose?

Faria and Manaea. McCullers hasn’t gone more than 5 innings in two months and had an ERA over 9 in July.

Was offered Nelson, Lester and Chris Taylor for Mookie. Thoughts?

Mookie is MIA since the ASB. Misses Popi more than anyone cares to admit. You make that deal.

I hate to give up Mookie but that seems like an OK return if you really need the pitching. He hit .236 with 4 home runs in July, but I think he has a better August/September. Depends on your league and team needs.

I love the Taillon match ups as well but he has been dreadful the past month.

Are you as concerned as I am?

It was really only the one start where he was awful. Other than that, he has been fine. I think he’ll be all right going forward.

Mike,
You had Clevinger included as a 2 Start last week, but it looks like he will be in Boston tomorrow and home against NY later in the week. I am planning on sitting him against those 2 teams, especially after his last groin kicker after getting staked to a 7-0 lead, but I wanted to get your thoughts. I am not a huge fan.

Yeah, a few things got moved around. Seems to happen to a few pitchers just about every week.

I like Clevinger. He walks too many guys and his FIP suggests some possible regression could be coming, but there is a lot to like, especially since he has solid strikeout stuff. He had 4 straight quality starts before his last dud, and I also wouldn’t be that afraid of the Red Sox right now. They have the worst wOBA in baseball over the last two weeks.

Yankee My Wanky!
Reply to  mikeMaher

@mikeMaher: Yeah, all excellent points Mike. I guess I’m still a little pissed off because he kinda screwed me this week when he should have cruised to an easy win. I think I will start him and hope for the best. The Red Sox are kinda weak, which is great because of who I root for.

Haha I hear you. No problem.

10 team h2h redraft league with 50 moves limit(not my idea). I have 8 moves left for the season. With that in mind: would you drop Happ, Straily or Clevinger for any of these: Morton, Wacha, Corbin, Davies,Lynn? I know some these guys could be affected by the trade deadline.

Probably not, but I might take a look at Lynn or Wacha if there start to be whispers of an innings limit for Clevinger.

Ralph’s Top 1oo Starters for ROS comes out tomorrow, so I would check his list, too. But I think you’re good for now.

Appears that Lester and Arrieta will switch places and Lester will have two starts this week.

Thanks for nothing, Joe Maddon. I would give Lester a slight bump in place of Arrieta.

I think Bumgarner was moved up to Sunday. Good stuff as usual though.

Thanks. Yeah, I saw that this morning. One day I’ll get 100% accuracy on this list. One day…

1. Are you buying Gausman’s resurgence? Seems he did the same thing last year at this time.

@Last Man Standing: Gausman’s XFip has been one of the best for July not to mention 4 wins in 6 starts.

Pirates SUCK, I say this from the ‘burbs of Pgh. Wacha all the way.

Ha! That pitching to contact stuff not working for him now. Thanks

@Questions I Know The Answers To But Have Issues:

Agree with Mark. I picked up Wacha like over a month ago and have been riding the wave so far.

Gausman has looked much better, but hard to trust anyone or anything about the Orioles right now.

Nola has pitched considerably better at home than on the road as evidenced by his ERA and Batting Average against. With two road matchups, including the dreaded trip to a Coors, might this be a good week to give Nola an oil change? Castillo v StL, Wacha and Weaver @ Milwaukee and the resurgent Vargas @ Baltimore are single start options to replace Nola.

Not a bad idea. That road start at Coors is one of the main reasons I dropped Nola to where he is.