Another week, another Clayton Kershaw start pushed to Monday. At least this week they moved the start before I wrote and submitted this article. If they move it again Saturday morning, then I will be convinced that Dave Roberts is just doing this to troll me every week. As of now, he is your top two-start starter for Week 12. He might even deserve his own tier.

For Week 12, there aren’t a ton of attractive options after our first two tiers. In previous weeks, we have had middle-of-the-road arms with some good peripherals or some recent success that were available in the majority of leagues. This week, though, I’m not crazy about any of the starters on this list that are going to be available in most leagues. Just look at the numbers in the chart below.

After staring at the names below for what felt like days, the name I finally settled on was Francis Martes. Martes started and won his first MLB game a couple days ago, going five innings, striking out seven, and giving up one run on three hits and two walks. Here is what an unimpressed Grey said about him at the time:

The ERA is perhaps a bit misleading since it includes a relief appearance in which he went 3 2/3 innings and gave up four runs. The main positive that jumps out at you is the strikeouts, as his 9.35 K/9 is quite good for a youngster through his first nine innings in the big leagues. But (you knew there would be a but after such a positive lede), there are some pretty big red flags. Ahem:

Of course Francis Martes is dominating in his first MLB start, because we didn't just see him compile a 5.29 ERA and 2.10 WHIP at Triple-A. pic.twitter.com/8Hj1LGcBLL

While Martes is a top pitching prospect for the Astros, he has been, well, not good in Triple-A this season. While he is striking out 10.58 per nine innings in eight starts, he is also walking an astronomical 7.79 batters per nine, which is a big reason behind his 2.10 WHIP and 5.00+ ERA. His numbers in Double-A in 2016 are much better, though, so it is possible he was just going through a bit of an adjustment period at a new level this season.

It also doesn’t hurt that he happens to be pitching for one of the best teams in baseball right now, giving him a decent chance at two wins if he can avoid disaster in his two starts. I like him as a roll of the dice for Week 12 with the potential for strikeouts and wins, but I will admit that he terrifies me.

A few other notes before the chart:

*** Not guaranteed to get two starts if Hendricks returns 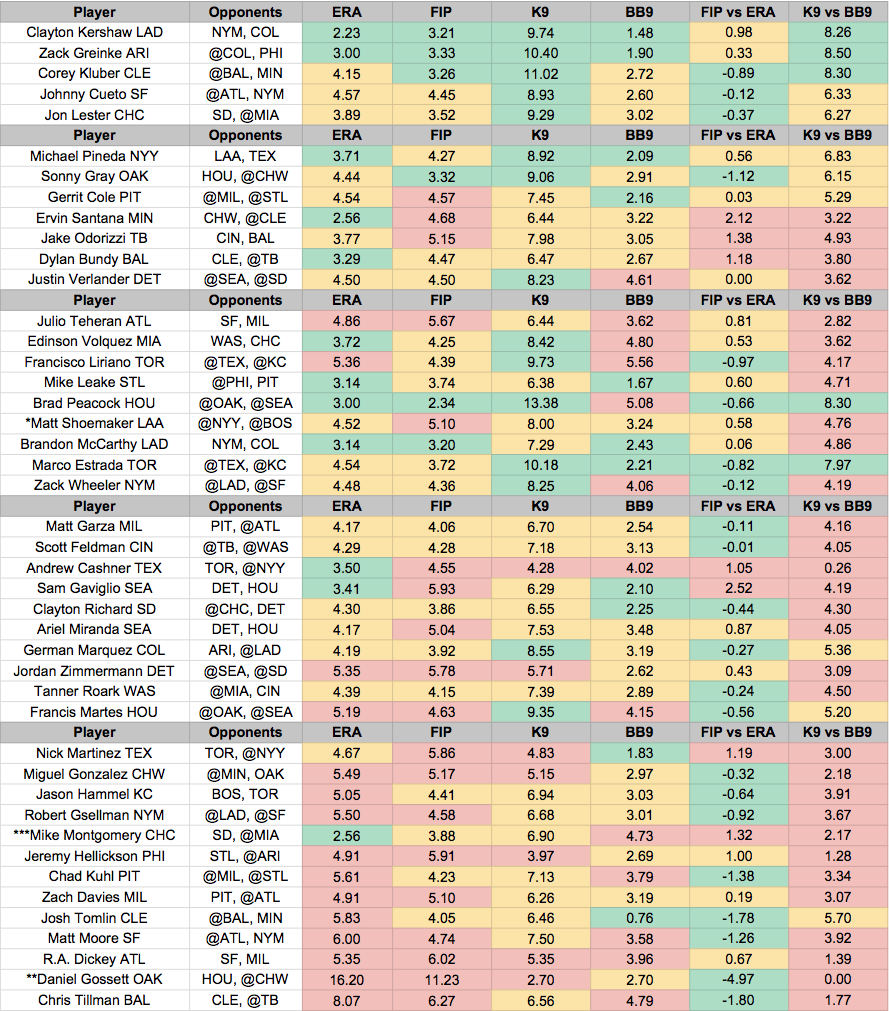