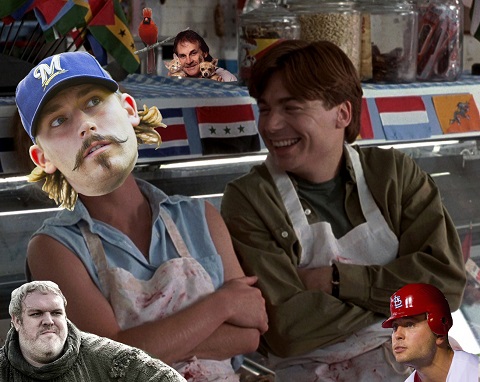 King Hodor of the House of Hodor. First of his Hodor. Long may he Hodor.

At this point, there appear to be more trades occurring after the July 31st deadline. In fact, just yesterday, Mike Morse was acquired by the Orioles, Jason Kubel was acquired by the Indians, and, as you may or may not have realized yet, John Axford and his, well, what ever you call the things he grows on his face, has been acquired by Ozark nation. Which, if you don’t know the area, is known for abandoned El Caminos and the second highest murder rate in the nation, next to Detroit. Err, Detroit, the RoboCop version. What’s the fantasy impact? I’m sure glad I just asked myself that question. Mike Morse’s situation changes a bit, a better hitting environment and a better lineup could lead to some stat boosting. Jason Kubel, well, he remains the same. Insignificant. Frankly, I don’t even understand the move, since the Indians are already paying for a player (cough, Mark Reynolds, cough) that’s doing better right now, yet plays for the Yankees. Ballsy strategy if you ask me. And then there’s John Axford. I’ll be honest, since I lie all the time I guess, the impact here is not much, if anything. But I do like Axford drinking the same water those other Cardinal pitchers are drinking, and would not be surprised if his situation improves next year. So keep a look out. Here’s what else I noticed yesterday…

Dustin Ackley — 4-for-5, 1 run, 4 RBIs. The amazing things you can do with a .430 BABIP. So enjoy it while it lasts, because there are still underlying reasons why Ackley is still Ickely. That’s an adverb of icky, by-the-way. Don’t question it.

Yu Darvish — 6.2 IP, 3 ER, 5 baserunners, 11 Ks. The third time he’s heavily flirted with a perfect game. First time, Marwin Gonzalez happened. Second time, #UMPshow got in the way. Third time, sheesh, you’d figure they’d just make out at this point and be over with it already.

Ike Davis — 1-for-3, 1 run, 2 RBIs and his 9th homer. His recent numbers look more in line what we’re used to. I’ve never questioned the power, but I don’t like Ike’s swing at all. Yes, if you’re wondering, I lifted that quote from Tina Turner. What… you don’t know who Ike Turner is? He’s got more beats than Chris Brown. HURRRRR.

Ryan Dempster — 6.1 IP, 3 ER, 8 baserunners, 5 Ks. Yo, Gilpin, how’s that sleeper prediction on Dempster holding up? Oh, about as good as my R.A. Dickey prediction? Touché.

Jose Fernandez — 6.0 IP, 2 ER, 5 baserunners, 8 Ks. So yeah, he’s only 21. Sky’s the limit here. Unless he gets Harvey’d, then baseball just becomes another episode of Game of Thrones. Everyone dies and your feels matter not.

Dexter Fowler — Bad news from a second MRI revealed a sprain behind his left knee. The first MRI? Someone cried fowl. Hey-O. There is no timetable for his return, but I’ll be back next Saturday.

Freddie Freeman — 2-for-4, 1 run, 2 RBIs and his 17th homer. Everything is the same between last year’s Freeman and this year’s Freeman, sans the 60-point difference in BABIP. Just note that for next season when he turns into Regressman.

Adrian Gonzalez — 2-for-4, 2 runs, 4 RBIs and his 18th and 19th homers. The HR/FB rate isn’t where it used to be, but the Plate Discipline and Batted Ball numbers have moved closer to his career norms. I think this might be who he is now, a 290/330/460 guy. Not great at the corner, but better than the sub-20 homer guy he was becoming.

Carlos Gonzalez — Will begin a minor league rehab assignment later today. Who has two thumbs and told you to sell Cargo at the all-star break because of an eventual injury? This guy. And since you can’t see me, I”m pointing at myself with both my thumbs. With a Twix bar in my mouth, bourbon on the desk, and no pants on. Or what I call — Friday Nights.

Billy Hamilton — It is being reported that the Reds plan on calling up Hamilton on Monday. Here’s what our prospect maven, Scott Evans, had to say about him: “Hamilton has unprecedented speed, and with it, he’ll undoubtedly have an impact on the fantasy game.  But before the Reds can feel comfortable using him, he needs to log more time in CF (only 17 pro appearances thus far), and he also needs to prove that his hit tool is adequate versus Triple-A arms — AAA repertoires are deeper and pitchers are more savvy with sequencing than what Hamilton faced last year.  Lots of folks are anticipating a mid-season arrival for the 22-year-old, but I doubt we see him before September.”  I’m personally not sold on the hit tool yet, but he has game-changing speed and is worth an add for that alone. Though, playing time is the big question mark here.

Chris Herrmann — 1-for-4, 1 run, 2 RBIs and his 4th homer. As I mentioned last week with Tanner Roark, I would normally highlight Chris Herrmann in my Deep Impact series. But this is my temporary Saturday residence, so I’ll give you the low-down here.  He’s a catcher and outfielder who can hit a little, and there might be a bit of speed here as well. If Herrmann gets consistent at-bats, he could end up being an unspectacular, but stable second catcher. Something like Salvador Perez with a lower BA and higher OBP is a loose comp.

Garrett Jones — 3-for-4, 1 run, 4 RBIs and his 13th homer. If you were wondering, it’s been two weeks since Garrett Jones has been mentioned in a positive manner on this site, and just one day since something negative was written. I believe that illustrates his fantasy value perfectly.

Francisco Liriano — 8.0 IP, 0 ER, 4 baserunners, 6 Ks. This is how he’s doing it. Now, if only I could figure out how to tell you last February, then we’d be on to something. I guess that would be time travel, so yeah. Prolly not gonna happen.

Nick Markakis — 3-for-4, 1 run, 1 RBI. The ‘Greek God of Doubles’ has transformed into the ‘Greek God of Inertness’. Maybe his hamate injury is the reason. That’s, at least, what Pablo Sandoval led us to believe a few seasons ago when he ate his hamate. Mmm, ham. Where is the hamate anyways? I got some peppercorn and a honey glaze ready to go. Don’t pay attention to the fact this is treading on possible cannibalism.

Victor Martinez — 2-for-3, 1 run, 2 RBIs. I honestly thought he was done after his first-half impersonation of Pete Kozma. Who knew that all he had to do was be himself? MOTHA. EFFING. DEEP.

Joe Mauer — Hopes to hit off the tee later today after being sidelined since August 19th from concussion symptoms. There is still no firm time table for him to return, but there’s still a chance he plays again this season.

Justin Morneau — 1-for-4, 1 run, 1 RBI and his 17th homer. Part of a back-to-back homer co-op with Herrmann. Which I hereby proclaim hence forth as Mormann™.

Angel Pagan — 1-for-3, 1 run. He wasn’t expected to play until Sunday, but he got the early activation last night. Which makes it seem like he’s a robot. Or a gift card. Hopefully a Best Buy gift card. What were we talking about again?

Yasiel Puig — 4-for-5, 1 run, 1 RBI. Now we get to read stories, ad nauseum, of how discipline goes a long way. Has nothing to do with talent or luck or anything but Mattingly’s coaching gravitas. The makeup issues might be real, and the mistakes might be crushed by the media market, but let me make a suggestion here that solves all of our problems — Dodger-themed fedoras. Fedorable is a Cuban only setting, and might just be the shot in the arm Puig and Mattingly’s relationship needs. Nobel Peace prize accepted.

Mark Reynolds — 3-for-4, 1 run, 1 RBI. Soooo. As alluded to in the intro, this is looking awkward for the Indians.

Wilin Rosario — 4-for-5, 2 runs. He has to be right behind Posey in next year’s draft, right? Wilin and dealin’ if you ask me. A pun via an idiom… so a pundiom? BRILLIANT!

CC Sabathia — 5.2 IP, 5 ER, 8 baserunners, 4 Ks. I once stated that CC’s days of being an elite fantasy starter were over. But he’s not this bad. Unless Sabathia’s just been really, really hungry. Then it all makes sense. Someone take him to Subway for a foot-long cold cut trio with a side of pepperoncini’s and regression.

Jeff Samardzija — 6.2 IP, 5 ER, 10 baserunners, 6 Ks. The peripherals show a better pitcher than he has been. August was lame, I will admit, but I still believe there’s an ace in here somewhere. In fact, I believe so much, I’m going to name my first-born Samardzija, because, ef their childhood, that’s why.

My reaction after looking at Alfonso Soriano’s stat page…

Julio Teheran — 6.1 IP, 1 ER, 7 baserunners, 8 Ks. I wasn’t a believer, but I guess I should have been more patient. There will be regression, but as long as his offspeed stuff remains, at the very least, mediocre, there’s something to work with here.

Shane Victorino — 2-for-4, 2 run, 1 RBI, 1 SB. As we all know, he’s nicknamed the “Flyin’ Hawaiian”. My question is, doesn’t that just make him Hawaiian Air? My second question is, what are the fares priced at for DC to Maui in September?

Taijuan Walker — 5.0 IP, 0 ER, 3 baserunners, 2 Ks. I know the hype machine is going into overdrive here, but let’s keep in mind that this was the Astros.  And he’s about 35 innings away from his alleged season limit. Also, I’m not too excited about his minor league walk rate either. Look, you’ve been getting the rose nonstop. I’ll be the thorns. That was probably the worst metaphor ever.

Michael Young — 4-for-5, 1 run, 2 RBIs. The song ain’t called ‘Forever Young‘ for nothin’. But yeah, he is pretty old though, and, at this point, a little irrelevant fantasy-wise. So I guess the joke’s on him. Wait, how much money has he made again? Nevermind. We got hosed.