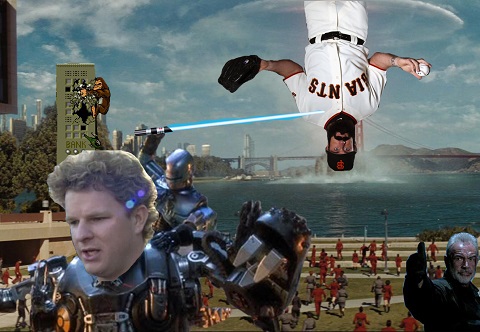 So it’s official. Just in time for your playoffs or late-season run for a title, Matt Cain has joined Jason Heyward and Rafael Betancourt, all recent casualties, on the DL. Even though the X-ray’s came back negative after Cain got hit by a line-drive on Thursday, Bruce Bochy said it was too soon to say whether or not he would make his next start. A mere seven hours later, which I guess was not too soon anymore, it was decided that Cain would not only miss his next start, but at least three. You’d figure with such a big head, Bochy would have a better grasp of time. And, you know, bullpen usage. Granted, this season wasn’t shaping up to be Cain’s finest and was pretty up-and-down (more down) in general. But his second-half ERA of 2.84 and improved walk rate were representing an expected regression. So the timing couldn’t be worse, especially since the Giants are not postseason bound and really have no reason to rush a recovery. Relevant. Here’s what else I noticed yesterday…

Brandon Beachy — Also joining the above mentioned triumvirate on the DL with right elbow inflammation. Did you know that he pitches an average of 66 innings a year? Son-of-a-Beachy is right.

Jhoulys Chacin — 7.0 IP, 2 ER, 8 baserunners, 5 Ks. I recently spotlighted him here, much to my Chacin. Yes, that’s twice now I’ve used it, but it’s just so darn clever. This is me patting myself on the back.

Khris Davis — 2-for-3, 2 runs, 4 RBIs, and his 7th and 8th homer. I believe he is actually Chris Davis. To get to the bottom of this, I’ve requested his long-form birth certificate.

David DeJesus — 1-for-3, 1 run. Traded to his 80th team in the last two hours. Guess everyone ef’s with this DeJesus.

Freddy Garcia — The Atlanta Braves acquired him from the Orioles for cold-hard cash. With Tim Hudson out and Beachy being his usual self, there’s certainly a need. He didn’t exactly impress over in the AL with a 5.77 ERA in 53 innings, but those numbers could calm down a bit in the NL. Desperate owners only need apply.

Brett Gardner — 2-for-2, 2 run, SB. Old English surname rules dictate that Gardner would also be great at growing azaleas. Which I guess means that his teammate, Robinson Cano, is good at, um, being a lightweight narrow boat?

Jedd Gyorko — 3-for-4, 2 runs, 3 RBIs, and his 15th and 16th homers. Even if I weren’t such an unabashed Padres lover, I would still be high on Gyorko. Who doesn’t like 20-homer power at the MI? I’m looking directly at you, Dan Uggla owner. Trust me, it doesn’t have to be such an Uggla affair any longer.

Scooter Gennett — 3-for-4, 2 runs, 1 RBI, and his 5th homer. The scouting reports have never been strong, but he’s hit everywhere and is certainly continuing the trend. I still see bench guy with some pop, but I’m willing to keep an open mind. Were you expecting a Scooter pun? I do have standards… but not really.

Gio Gonzalez — 3.1 IP, 7 ER, 12 baserunners, 1 K. Well, this is who he is. A valuable number two starter who, every couple of weeks, takes the time to personally drive over to your house and punch you in the crotch.

Robbie Grossman — 2-for-4, 1 run, 4 RBIs, and his 4th homer. I think he should consider making his middle name ‘that’s’. I mean, how many people do you know with a name that can also be a standalone sentence? I rest my case.

Bryce Harper — 1-for-3, 1 run, 3 RBIs, 1 SB. The lesson here is to not use your knee to break open walls. I wonder, what type of season this could have been without all the nagging injuries and Hotlanta going angry-mob on the guy? But, yeah, you’re right, clown question, bro.

Felix Hernandez — 6 IP, 2 ER, 4 baserunners, 10 Ks. Good thing he’s not a king on Game of Thrones. Because he would either end up dead or become a character that we all love to hate. And, on that note, it’s even better that he’s not a Stark. They suck at this game.

I could watch this for hours.

Ryan Ludwick — 2-for-3, 1 run. You could pick him up hoping for help. You could also take a tire iron to your own head. I’m not sure if there’s much of a difference.

Yadier Molina — 3-for-4, 2 runs. Clearly, he sets the bar for the 65 other Molina brothers currently playing in the Major Leagues. And the 12 over in Japan.

Kris Medlen — 6 IP, 3 ER, 7 baserunners, 3 Ks. This start represents Medlen in a nutshell. Hopefully not Pistachios. I like them. Medlen’s? Not so much.

Bud Norris — 4.2 IP, 7 ER, 12 baserunners, 7 Ks. If Norris would have told me that for every strikeout he got, he’d give up an earned run, I would have told him he’s doing it wrong.

Tanner Roark — 4.2 IP, 0 ER, 2 baserunners, 2 Ks. Normally, I would be writing about Roark in my Deep Impact series, but since I’ve been temporarily transferred to Daily Notes, you get to read about him here. He certainly did an admirable job cleaning up Gio Gonzalez‘s mess. There’s not much of a ceiling here, but the floor is ready, if you like interior design metaphors. Roark will most likely end up a back-end starter or in long relief when all is said and done, but with Taylor Jordan‘s inning-cap, there’s a chance for some starts. And if he starts, maybe there’s something like Brandon McCarthy here. Small chance, granted. But stranger things have happened. Yuniesky Betancourt is a baseball player. Just think about that for a second.

Brian Roberts — 1-for-3, 1 run, 4 RBIs, 1 SB and his 3rd homer. Don’t bother, as soon as you add him, his wrist will explode. And just in case that isn’t enough, his left hamstring will collapse into a wormhole that leads straight to the space station DL-9. (Nine standing for the ninety-billionty times he’s been there.)

Chris Sale — 7 IP, 8 ER, 9 baserunners, 6 Ks. Here I am, still waiting for his arm to explode. Granted, something exploded in this game, but you know what I mean. I’ve been spouting about this soon-to-be injury for two seasons now, and I still can’t bring myself to trust him. Look, I don’t wish injury on anybody, but c’mon. Joel Peralta once injured a neck muscle jumping out of a car in pursuit of sammiches. SAMMICHES! God does have a sense of humor.

Kurt Suzuki — The Athletics have re-acquired Suzuki with John Jaso still suffering from concussion symptoms and Derek Norris still having issues with his toe. He is now Aloha, personified. And if he wasn’t Hawaiian, I’d probably do a Beatles reference here. Win-win.

Will Venable — 3-for-4, 2 runs, 3 RBIs, and his 18th homer. I will keep talking about this guy until he gets drafted around the same place as Desmond Jennings. Which means I’ll never stop talking about him. Brace yourselves.

Adam Wainwright — 9 IP, 1 ER, 6 baserunners (no walks), 9 Ks. Interesting fact: Wain means ‘Wagon’. That’s it, that’s all I got. The stats pretty much speak for themselves.

Jayson Werth — 1-for-5, 1 run, 2 RBIs, and his 19th homer. My name is Jason, but, as you might have noticed, most of everyone just calls me Jay. Werth has figured out how to combine the awesome. Fascinating.

Jake Westbrook — Yet another 15-day DL stint, but this one ends on a happy note. That note? Carlos Martinez is back and ready to resume stater duties. Heh. Doodies.

Ben Zobrist — 1-for-4, 1 run, 1 RBI, and his 10th homer. Based on evidence found here, I’m entering into public record that the Zorilla monster is coming back next year to terrorize and maim. So, you know, if your name is Mothra, you better check yourself before you wreck yourself. Um, yeah. It sounded better in my head.