I’m a big fan of the everyman. I consider myself the everyman. I’m every man’s everyman. A pioneer of normcore. Track pants and a blinking light on my car’s dashboard that either means my seatbelt isn’t on or I need oil. That is me. What better way to elevate the Everyman Culture, than to take part in a tourney where no one is smarter than anyone else. Enter the RazzSlam, a Best Ball tourney.  Every everyman likely knows what a Best Ball league is, but, if you don’t, it’s when you draft a team and the computer manages it for you by choosing who are your best players, and you get those stats. It’s basically one fantasy league removed from the robots taking over and killing us all. Well, the last laugh is on you robots, there’s a virus beating you to the punch! Kinda love that Razzball is putting on a tourney (hosted by NFBC — thank you!) that no one really has any clue how to strategize against. A true everyman experience. Oh, I’m sure there’s a few people who think they know the best strategy for, uh, Best Ball, and a few of them might be right, but there’s an under 1% chance they know why they’re right, and it isn’t just luck. In some ways, Best Ball leagues are a lot like Best Ball strategies. Throw a ton of them out there and a few good ones will rise to the top through sheer force of players’ performances and nothing you’re actually doing. That’s the fun. Anyway, here’s my RazzSlam, a 42-round, Best Ball 12 team draft recap:

OKAY, NOW THAT WE GOT ALL THOSE PEOPLE OUT OF HERE BY YOU SAYING YOU HAVE NO IDEA WHAT YOU’RE DOING — VERY SLY, BY THE BY. SO, HOW DO YOU REALLY FEEL ABOUT THIS TEAM?

Short answer is I have no idea. Long answer is the rest of this post. Here’s the scoring so we can at least try to make heads or tails of the league: 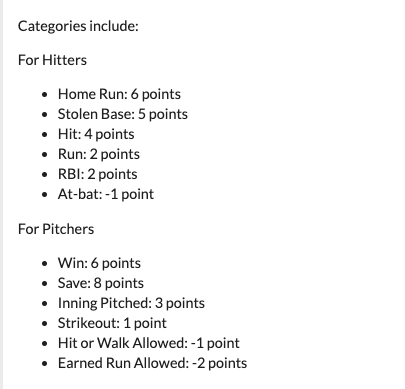 Last year in what was admittedly a screwy year, Trea Turner led scoring with 385 points; Jose Abreu was at 384; Ozuna at 376 and the top pitcher was Shane Bieber 12th overall, at 306.30. This seems like it would play right into my hands, but, honestly, I think all leagues are designed to play into my hands. Nancy Sinatra would say, these hands were made for winning, and that’s just what they’re gonna do… There were only two starters in the top 27 points scorers (Bauer had 263 points, just after Nelson Cruz). Speaking of Nelson Cruz:

We’re having laughs, y’all! So, when four starters went off the board in my league by pick 19, well, I was confused in this league as I am in every other league where it happens. Sadly, my answer to that was Eloy Jimenez. A true champion of kicking me in the nads. Yes, this draft happened before Eloy thought he was Stretch Armstrong and could reach a home run ball 75 feet past the wall.

SO YOU HAVE NO IDEA WHAT YOU’RE DOING BUT YOU’RE SURE YOU’RE DOING IT CORRECTLY? THIS SOUNDS LIKE EVERY OTHER DRAFT RECAP FROM YOU.

Unlike roto leagues, I think Points Leagues are more about exploiting the format than about what players you draft. Well, the players you draft are important, but how they play into the format. There’s more “format play” than “get the good players” play. For unstints, top of the order guys who get a lot of hits and maybe steal a base or two — hello Raimel Tapia — can be very valuable. Last year, Tapia scored the same number of points as Keston Hiura and one more than Matt Olson, and only two less points than Hyun-Jin Ryu or Paul Goldschmidt. That’s exploiting format vs. getting a player who you think is good in roto. Also, last year, Brad Hand was more valuable than Lucas Giolito. So, another format buster:  saves. Or are they?

AM I READING A FANTASY BASEBALL ARTICLE OR QUESTIONING THE SPHINX? YOU DIDN’T DRAFT CLOSERS, SO, PRAY TELL, WHY?

Last year’s closers valuableness might have been predicated on the length of the season. Lucas Giolito scored 17.20 points per game on average, and Brad Hand scored 9, so I’d guess if there were another 100 games, then Giolito would’ve pulled away with more value. This was the direction I went with my pitching staff. Just a shizzton of starters–

–and Carlos Carrasco. Yes. Between him and Eloy, this team is jinxed real good. Obviously I drafted Carrasco before the 1st injury was announced — the elbow injury. Then Carrasco was like, “I see my elbow MRI and I raise you a hamstring MRI.” Not sure if it was better his injury happened while I was drafting vs. after, because it sent me in a shame spiral and I drafted a ton of starters to cover for him. I have arguably four number two’s and three number three’s. If not for Carrasco, I likely wouldn’t have gone that aggressive after Gausman, Paddack, and Luzardo as I made like a short order cook and scrambled. Though, Eloy’s injury happened after the draft, and I’m kinda fine with Enrisqué, Naylor and other fill-in options.

I can’t stop drafting Alec Bohm. At this point, we’ve moved past the point where I know why and now I just have to have him, like anyone who actively wants Yeezys. Common sense out the window and in its place is lust, greed and wish-upon-a-star-iviness. Vlad Jr. is another guy who is finding himself on all my teams too. No wonder I can’t get a bad batting average in all my leagues no matter how hard I try. All these guys do is batting average! For this league, they showed up high on my spreadsheet, because of how many points you accrue for hits, runs and home runs. Another guy who I haven’t mentioned much who I am actively eyeing in all drafts late is Enrique Hernandez. Who knows if the leadoff thing lasts, but for his price in drafts, it’s well worth the flyer. Finally, I secured my first share of India. Naan naan naan naan naan naan naan naan naan hey hey hey, hello!