If I had a nickel for every time I streamed Matt Moore this season I would have probably six or seven nickels by now. Most of those nickels would have been thrown out of my second-floor window because the streams did not go very well. But, like any good insane person, I can’t help myself and am back for more. Or should I say back for Moore?

Matt Moore tops the Streamonator list this week for two-start starters owned in less than 75% of RCLs. At $15.50, he has the 7th highest value, behind only the six you see above him in the chart below. I would have to go back and look to be sure, but I think this is the first time all season that my top seven starters lined up exactly with what Streamonator projects. That is two opinions for the price of one, people. You can’t get that kind of bargain anywhere else!

While he sports a pretty ugly 5.38 ERA, he has tossed three straight quality starts. In those starts, he has allowed five runs in 20 1/3 innings while striking out nearly a batter per inning. His ERA of 4.09 in the second half is two runs lower than his first half ERA, which was inflated by an absolutely awful 8.88 ERA in June. June must have been when I was streaming Moore the most because that wound feels fresh.

His 4.51 FIP, while not great, is also almost a run lower than his ERA, so it seems that the Moore of late is leveling out to match up with what his peripherals are saying. While many of his numbers this season match up with what he has done throughout his career, there are a few concerns among the bunch. For starters, his swinging strike percentage is down. It’s not drastically down, as 8.9% is not a freefall from his career mark of 10.2%, but it is notable. His BABIP is slightly above league average at .329, while his 1.51 WHIP is up above his career 1.37 WHIP and the 1.29 he put up last season. His Hard% is up nearly 4%, and he is giving up a few more home runs this season, but then again who isn’t, right?

As for other starters with a positive Streamonator $ value who are owned in less than 75% of RCLs, here is the entire list:

Yes, the entire list is Mike Fiers. Andrew Heaney almost cracked the list, but he ended up with a -$1.50 value over his two starts. If one of those starts wasn’t against the Rangers and their league-best .377 wOBA over the last two weeks, he might have made the cut. Now, to the charts! 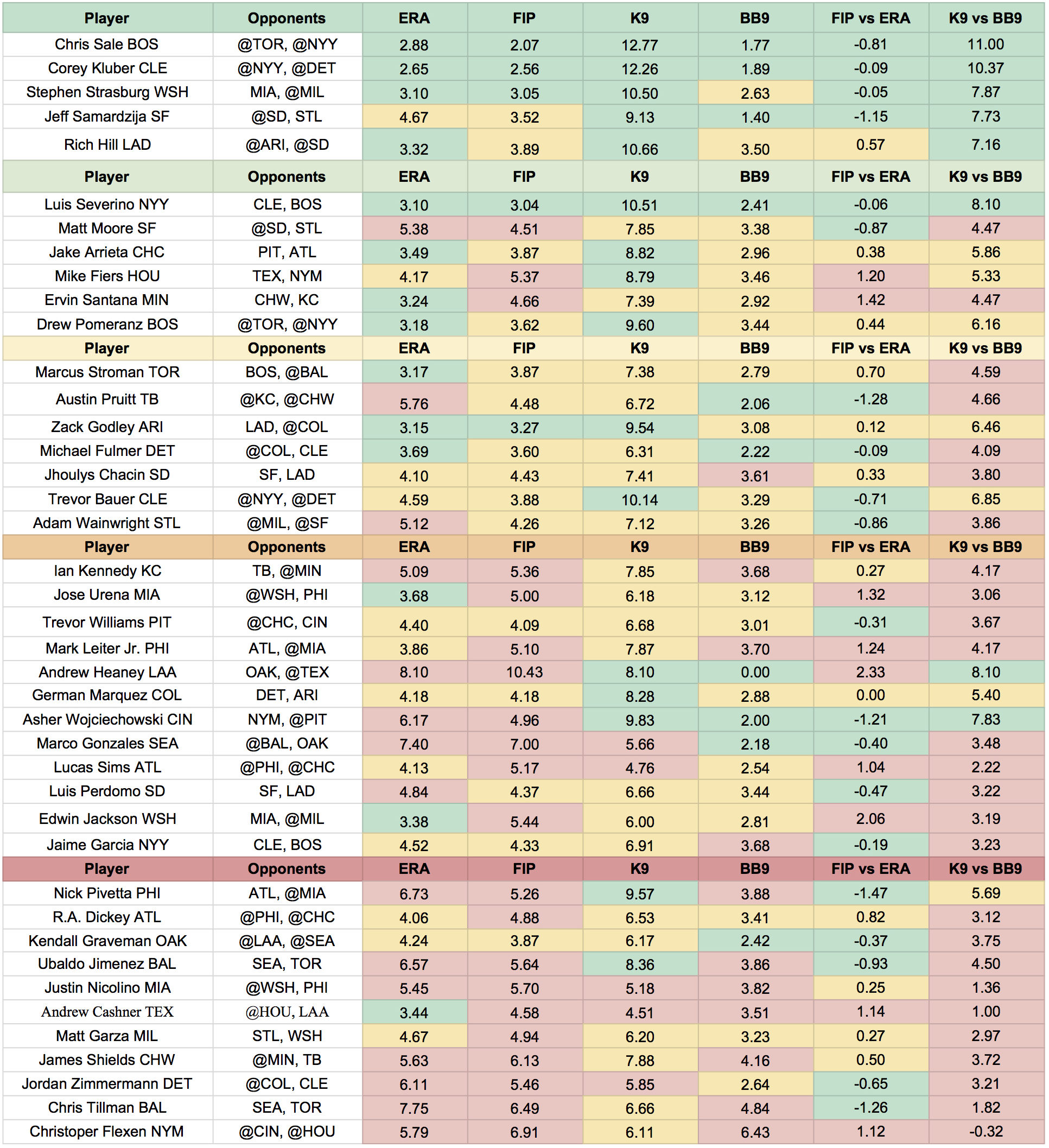 Where does Nola slot in now that he’s been announced as today’s starter?

hey no RYU or Bundy?

Shark is better than Serverino? Hmmm

Just based on the matchups.

Wainwright is on the DL until Sep 1 at the earliest. Not making 2 starts. Where are you getting your lists from? Always incorrect starters.

Haha, ouch! I use three different sites to compile the list. Razzball Streamonator, CBS, and FantasyPros. There are 40+ two-start starters every week, and they are based on projections four or five days before official starters are determined. There are bound to be a couple changes each week.

I believe Luke Weaver is starting on Tuesday @ Milwaukee and Sunday @ SF. Where would you rank him?

He looked great last time out, and I like those matchups for him. I wo uld probably put him in that second tier.

@mikeMaher: don’t use razzball’s, it often is a day or so late to some stuff. depthcharts.com or even espn (use team, schedule) are more accurate. using SON for quality of starts is good of course. i’d think FP would be as good as depthcharts though, could be wrong

sal romano
scribner
both get 2. SON likes the first on both, hates the 2nd.

Rudy actually recently overhauled the way Streamonator compiles the starters, so it should be faster and more predictive now. FP is the best visually but also one of the slower ones. DepthCharts.com is good, but I can’t export their list. Since it takes a lot of time to make the list and input the stats (though I have made it much quicker than it used to be), it is really helpful for me to be able to export a list into my template so that I can then start making my changes and inputting the stats I need. So far, Streamonator and CBS are the only two that make the list available for export.

I have the same question. CBS lists him as going 2 times. Mon and Sat

Yup, you are correct. He wasn’t on the lists when I compiled but he is now.

Is mike Montgomery not slated to go twice?

Yeah, looks like he is now. Lists were a bit slow to update after the Lester injury, I guess. His second start was still TBA on Friday when I compiled.

Now seeing reports that Lester may return this weekend to force a six man rotation. So who knows?

Thanks for the good work!