I don’t get it. This…this…this “pitchers have to be drafted early” …thing! Am I the only one who lived through the last baseball season? Even if you were to say to me, “I always draft starters early,” I’d say you’re living in some kind of goofball world made out of unicorns and iPhones that don’t correct the F word to duck. But fine! If this were a normal year. “If this were a normal year” is the ying, the yang, the sun and the moon. No pitchers are going to throw a lot of innings. Less innings means Gerrit Cole, if he’s the best pitcher, and the tenth best starter are going to be closer together. Pitchers as pancakes. Have one, and it’s Yum City, population: You. Have two, and it’s solid, great. Have three and it’s, “Do you have blueberries or something for these?” Have four and it’s, “Well, I liked my first two.” Have five and it’s, “I want bacon.” Have six and it’s, “I don’t even remember liking the first two anymore, and I never want to see another pancake.” All these guys taking starters crazy early are eating pancakes. Before I even drafted a starter, one team took Cole, Woodruff and Glasnow! “Cole…cool, cool. Yum City!…Woodruff…Um, yeah, but maybe I can get some blueberries or something…Tyler Glasnow? Stop! I’m diabetic!” For those unfamiliar, this is a standard 5×5, 16-team league, and, since it’s Yahoo, it’s 4 outfielders and two UTIL. As always, I used Rudy’s War Room, which is available with a subscription to our Razzball Tools. Anyway, here’s my Yahoo Friends & Family draft recap:

I’M THE 1ST PERSON TO TELL YOU YOUR TEAM LOOKS LIKE GARBAGE AND YOU SHOULD RETHINK YOUR ENTIRE LIFE, BUT THIS TEAM LOOKS DECENT FOR A 12-TEAMER. HOW IS THIS A TEAM IN A 16-TEAM LEAGUE?

Thank you, Mr. Al Caps, I tend to agree. Let’s show you my War Room totals.

Some small notes on the totals. I did the screenshot of the totals without my bench, but Pagan and Staumont will likely be in my lineup every day, since all my starters won’t be going, so put them totals on ZOOM to the STONKS BABY! No, they won’t fix my saves completely. Struggling to find saves this year in all my drafts, prolly because shizz like this keeps happening:

I love, love, LURVE that round of guys. Urias? Don’t mind if I do! Muncy? Please and thank you! Dansby? Oh hecks yeah! All of them are sexy, except for Pham, who just knows where to find sexy time. But the worst values there, and it was like this in every round:  the closers. C’mon, you can’t honestly look at me and say, Mark Melancon and Matt Olson should be going next to each other in any draft. McCullers and Paddack sandwiching Yates? Please get that out of my face. That’s nothing against the ‘perts who took those closers. When I took my closers, there were much better picks around them too that were non-closers. Why do we all just bite the bullet and take a crappy closer when we could have a much better hitter or pitcher instead? A question for another day maybe when I’m an old man, sitting on the beach in Curaçao, sipping a Zima and telling a young towheaded kid about this thing I created called Razzball.

HAVE YOU LOST YOUR MIND? THEY DON’T SELL ZIMA ANYMORE.

I have a case in my fridge from 1996 to celebrate my life’s accomplishments.

SO, ABOUT THAT PITCHING. IT DOESN’T LOOK THAT BAD, TEE BEE AITCH. 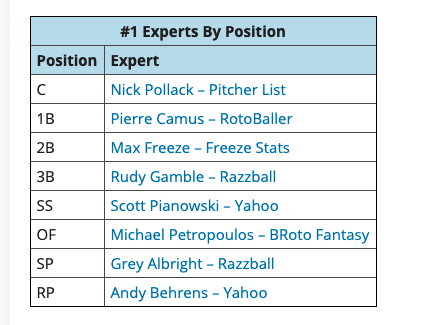 I DIDN’T REALIZE YOU WERE A BIG BALLER.

I don’t buy it entirely.

Thanks. All I’m saying is my projections and rankings say my pitching is better than even Rudy. Does that mean it is? I have no idea, but these are just baseline numbers. I think we can all look at my pitching staff and see Lance Lynn, Sonny Gray and Pablo Lopez and say that if this were a 12-team league, we’d be pretty okay with it. I also wrote a Zach Eflin sleeper, and like “Here’s a story of a lovely lady.” When you consider my previously aforementioned peccadillo with this league — they draft pitching so insanely early! — I think I did all right.

What I am finding in all my ‘pert leagues — your mileage might vary, because I do think ‘perts are drafting SPs earlier than most people this year, but maybe I’m naive — there’s a crazy rush of starters off the board. There were 16 starters and two relievers off the board before I took Lance Lynn. So, if you calmly take hitters while your entire league takes starters, and don’t get caught up in the bull rush, then once it subsides, you take your first starter when people are deciding between J.T. Realmuto and Whit Merrifield in the 4th round. Whatever you do, don’t reach for a starter just because everyone else is. I won’t mention any names, but Donkey Teeth freaked out in the 2nd round and took Blake Snell. Would you want Blake Snell in the 2nd round or Lance Lynn at pick 58? It’s alright, Donkey Teeth was able to find bats later and got Maikel Franco as his starting 3rd baseman. Speaking of hitting!

YOU’VE GONE BATTING AVERAGE STUPID THIS YEAR. LIKE YOU’VE REPURPOSED ONE OF THOSE COCONUT HUSK BANKS AND DRESSED IT AS CHARLEY LAU AND YOU CALL IT YOUR ‘DIETY.’

Mr. Al Caps isn’t lying. This is the first league all draft season where I didn’t draft Alec Bohm, but I still have so much average. I never draft average any other year. I actually draft the opposite of average. The unaverage. This year I find myself naturally falling for some guys: Treat Urner is basically all speed and average, Devers is about to go H.A.M., Vlad Jr. is done eating ham and about to go WHAM BAM THANK YOU GEORGE MICHAEL, Ketel Marte is my beloved lover and I cannot stop drafting him, and at that point, I had enough average to draft six Matt Olsons, but only got one. Still a shame I have no Maikel Franco shares.