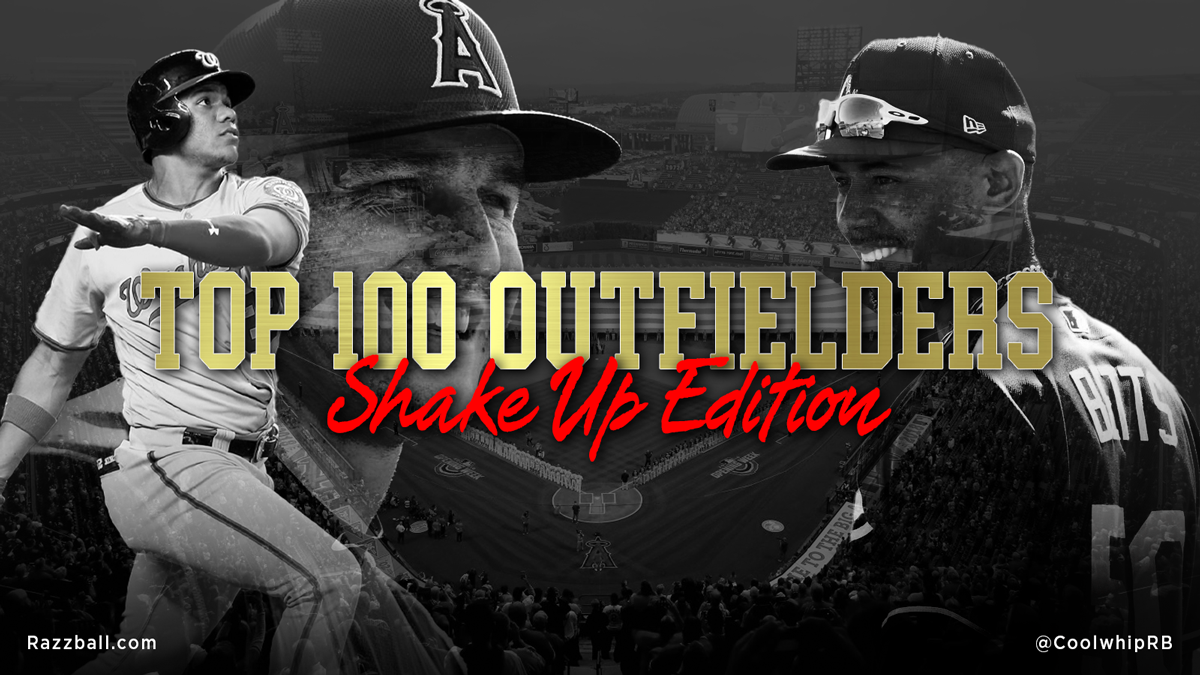 Last week I gave you the NyQuil & Naquin Update. We looked at some hot starters and some early snoozers. So I sat here pondering what I should do about the season so far. After all, we aren’t even a month in yet. Do I stick to my guns, make marginal changes to the board and keep telling people it’s early (which is true) or do I take a leap for faith and dive into the rabbit hole, “what if some of these wild things going on actually mean something, and if everyone is mad, are we all mad? or are those that still haven’t lost their minds the mad ones since it hasn’t driven them mad as of yet?” We ask the tough questions here at Razzball.

You will see things that might frighten you, but don’t be alarmed. These are just the ravings of a madman who dared to ask “what if?” What if Byron Buxton is stayed healthy (he probably won’t), Mitch Haniger stayed healthy (he probably could), Franmil finally broke out for real (maybe so), and Mark Canha was a top tier leadoff man (feels like it). And who the hell is Adolis Garcia and why is he not on your roster yet? These questions and more I shall pursue.

Mike Trout – He’s hitting .433 after a 4-5 night down in Texas upon returning to the lineup. I was told he was the 5th best option on draft day. I was told he’s going to hit .280; Yeah, well the Goat gonna goat.

Luis Robert – The homerun’s haven’t quite come yet. But my man’s leading the MLB in doubles and has 4 SB to start the season while hitting .305; yes, that’s right. LuBob is currently over 300.

Trent Grisham – He looks healthy and he looks improved. I didn’t want to buy him at price this year, but he is looking very good at the plate and very speedy on the base paths. During this last Padres-Dodgers series (Wrestlemania in the Ravine) he showed me something new… he hit against the shift with a very deliberate inside-out swing for a free single. Hell yeah. Last year he hit into the shift no matter what and hoped it would get through. This is big. I’m buying him for this season, he could actually return draft day value.

Nick Solak – Everyone was complaining about Nick for the first couple of weeks. Now his AVG is creeping up towards 300 and he has 4 HR to his name. Just in the nick of time.

Adolis Garcia – The power is real. He might strike out 35% of the time and hit .230 but the power is as real as mom’s meatloaf and just as filling. Also, this last night I saw him make some plays in the OF. His good defense will keep him in the lineup even when his bat hits some rough spots, which also means he will be able to fight his way through it.

Mark Canha – Can we talk about this man for a minute? Did not see this coming. He’s hitting .260 with a high OBP (.406) which is within expectations. But, he has 3 HR and 4 SB. That is not within expectations. And leading off for a solid A’s team is netting him some runs. He’s made himself very relevant to the conversation and would seem to be a solid threat on the bases. I took him as a 4th OF anchor a few places but on some teams, he might be my 2nd best OF. Yes. He. Can.

Justin Upton – JUp looks really healthy this season and is hitting the ball hard. He hit his 5th HR of the season last night. In a deep lineup with a lot of good bats, he’s kinda the forgotten man, and I think so with pitchers too. He is jumping all over mistake pitches and sending them to the moon.

Wil Myers – I was all about him to start the season and he has not disappointed. He’s hitting .268 with 4 HR and 4 SB. That’ll play.

Jesse Winker – Jesse is back. Jesse is a good hitter. Jesse hits in a favorable division and lineup. *wink*

Byron Buxton – Byron, more like Sellron, amirite? If I had him I’d be looking to sell him after his next home run. This will be a bit confusing but I’ll try to make sense… I am buying Buxton’s skills and the development of power, but I am selling his ability to keep it going all season long. Patellar tendinitis is just another rock in the castle wall of “don’t come near my roster”. I have him ranked high because of what he could do if he was healthy, but that IF is the size of the Titanic and just as dependable.

Kyle Tucker – After coming out of the gate hot, he cooled off and on their road trip going 2-for-21, ouch. He still looks to have a bit of a long swing so its not shocking that he’ll experience some cold spells. Being in that lineup thought will provide him ample opportunity for counting stats.

Ryan Mountcastle – Batting .167 with 1 HR, 3 SB. He has been on the struggle bus to start the year, but fortunately, he’s picked up a few steals recently to at least provide SOME value. But man he’s been brutal.

Ian Happ – He might be the one driving the struggle bus. I was on board with him coming into the season but he has done absolutely nothing. 10-12 team leagues you gotta bench or drop him and keep an eye on the waivers for signs of life later. The dude is lost right now.

Akil Baddoo – He finally came back down to earth after the helium wore off. A stretch of 0-fors and a few days rest have brought his AVG down to a more realistic .260, which he should hover around between his hot and cold streaks.

Marcell Ozuna – There’s trouble in River City. Despite hitting .182, he’s still found a way to be useful this last week by driving in some runs. That’s a good sign. Hopefully with more good news to follow.

Kyle Lewis – He’s back from the IL but hasn’t done anything of note yet. He’ll probably need a little time to get up to speed.

Adam Eaton – He seems to be having a bit of a Renaissance season thus far hitting towards the top of the Sox lineup. That is never a bad thing. He could continue to benefit from those around him collecting easy counting stats.

Alex Kirilloff – Called up. He got his first hit last night after a couple of zeros. A double. Fitting as I see him being a doubles machine in the lineup. That could be a nice return pending the Twins start hitting better as a team again.

Sam Haggerty – He played the field for 3 days straight and began to heat up before sitting yesterday. Damn! Hopefully, this is a sign of a bit more playing time and we see him go on a SAGNOF bender.

A quick rundown of some other guys that I’m keeping an eye on. Some positive, some negative. Michael Conforto, Lourdes Gurriel Jr., Brandon Nimmo, Austin Riley, Brandon Lowe, and Enrique Hernandez.