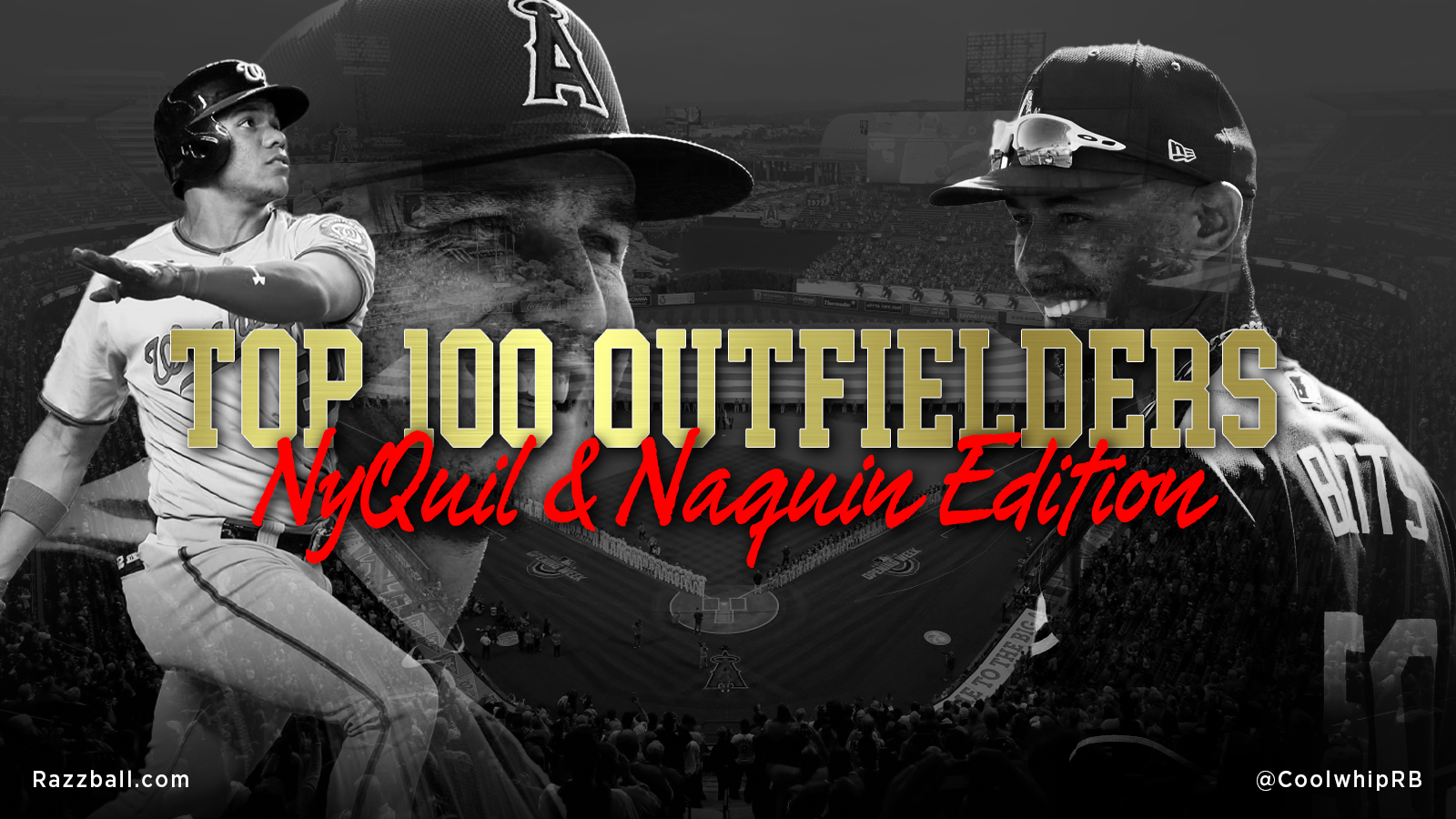 Welcome back, Razz faithful. We have the first week plus in the books. And of course, there’s a LOT to talk about and a lot to overreact to… as well as gloss over. Yes, all the things. There is nothing quite like the drug that is April baseball. I call this the NyQuil and Naquin update because there are many well-known and well-thought-of bats that are still asleep *glares at Lourdes Gurriel Jr. on my bench* and other lesser-known bats starting the season loudly, like Tyler Naquin (Raise your hand if you saw that coming. No you didn’t, put it down!). So rather than freak out let’s relax like Frankie. Pull up a chair, breathe, and take a dose of the no-playtime, slow-start, whiffing, choking, groundout, hit-into-double-play, bad BABIP, so you can roster medicine.

Tyler Naquin – Where else would we start? Hitting .290 with 5 HR and 14 RBIs from the leadoff spot, Wa-wa Wee-wa. He has come onto the scene hot to start the year looking like Tyler the Creator. But with 14 RBIs off 5 bombs, he’s been Tyler the Rainmaker. Though, his everyday at-bats now look to be a thing of the past with Jesse Winker back in the lineup and Nick Senzel getting on base at a good clip. Both Winker and Senzel tend to miss time, so he might get more ABs later, but I wouldn’t hold out hope (especially once Akiyama comes back). Ignore the fact that I overpaid for him in TGFBI as I was hoping he’d still play and give me a boost, cuz reasons. Those reasons include Bud Black’s lineup cards and Belli getting cleated. Sigh. That all said, he’s pretty much the same guy he’s always been:

Checked up on Tyler Naquin's zones (this season top, 2019 bottom) Yep! Still the same… crushes the bottom of the zone doesn't like it up and away. Yet people keep throwing it low to him, why? pic.twitter.com/XIzvzsh9qI

Akil Baddoo – Hitting .368 with 3 HR (edit: 4) and 1 SB. All things are as The Great Baddoo wills it. Baddoo is a great story for the Rule 5 draft (simply put, players acquired through such must be rostered all year or are returned). And as I told you last time, he was a good lottery pick for you too since the Tigers don’t really have an All-star outfield. A forgotten piece in the Twins system due to injury passed up for the Garlicks and Caves. He’s still largely untested with no experience at AA or beyond. This gives me a little trepidation going forward, but not lost hope… here’s why (Coolwhip’s going for a mini dive): 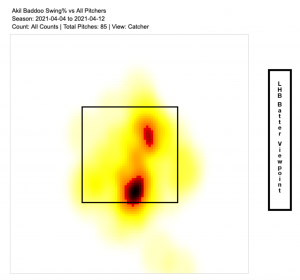 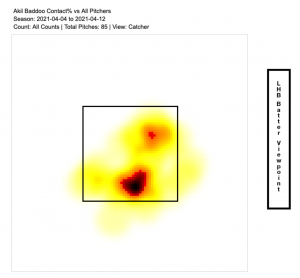 So for the most part he is staying faithful to the zone. But that large hole in his contact high and outside can be exploited. Most of his power is coming from that lower cluster which is nice (like many LHB) that he can handle the low pitch. And he’s shown that he can punish mistakes. *Spongebob rainbow meme: “OPPORTUNITY”* Each of the 4 home runs has been middle-in or down. But his scouting report says he has little game power… hmmm…

He reached out and got that pitch, and turned it into a triple. Can we appreciate that for a second? Gap power with sure hands and afterburner speed off a pitch he identified in front and reached for. Pitch recognition, check. Also, I think it’s clear that he has materialized more of that raw power to game power and he’s much more of a threat now than he was before. You love to see it. Now, he’s not going to be a .300 hitter with those Ks and that size hole in the zone. But his ability to identify pitches, especially mistake pitches, could lead to some good things. He’s going to go on hot and cold streaks, but the tools are there and still developing (which makes him pretty solid for best ball). How can you not be romantic about baseball?

Byron Buxton – Is there anything he can’t do right now? He’s hitting .469 with 5 HR and a SB. Last years numbers looked goofy, but it might be time for me to take the L on him. He could still get injured (like going to Ruth’s Chris for dinner) but he’s hitting the ball with authority and good contact, so it appears the power stroke is the real deal.

Mike Trout – Obligatory Trout shout-out. Still great. He’s hitting .394 with 4 HRs after “figuring out his swing in the offseason.” Say what? He’s just now comfortable with his swing? *gulp* AL West ’bout to get turnt up.

Ramon Laureano – He’s hitting 2nd in what should be a decent lineup. Champman and Olson have started a bit slow but they’ll come around. Meanwhile, Ramon is anything but sedated on the bases right now. Already well ahead of the pack with 8 SB. Garrett Hampson has 4. Those are your leaders. If this remotely continues he is primed for a big year.

Wil Myers – Hitting .341 with 3 HR, 11 RBIs, SB. I wrote extensively about him before the season and told you he was real and spectacular here. It’s true, all of it. He was pulled from this last game with knee inflammation, which apparently started in the spring. But it apparently hasn’t affected his bat. Hopefully, it doesn’t involve missing more than a game or 2.

Garrett Hampson – Speaking of Hampson, as I said above, he’s already got 4 SB despite Bud Block (not changing the typo) limiting his ABs some. We might be paying more attention to him if not for McMahon taking over the ring at Wrestlemania.

J.D. Martinez – So the videos are working now yeah? yeah. He’s got 5 HRs *checks notes* yeah still 5, and 16 RBIs. Totally washed. He’s only here because Yahoo is goofy enough to still grant him OF eligibility. I’ll use this as a moment to highlight the DHs. Yordong, Just Dongs, Cruz, Ohtani, and Franmil are all off to a great start to begin the season. And each of them was discounted to varying degrees in draft season… why? Because they only fit in the UT spot? That’s still a spot on your roster you need to fill. Why not fill it with a good bat? I think I have at least one share of each of these guys. They aren’t DHs because they can’t hit, but rather because they can. *lightbulb*

Tim Locastro – SAGNOF! With Josh Rojas forgetting how to hit and Ketel still warming on the stove, Timmy has nearly full-time ABs now and is a solid threat to swipe bags. They did just sign Reddick, so something to be aware of, but for now, the stage is his.

Cedric Mullins – With Austin Hays injured he too now has full-time ABs. So far he’s hitting .442 and chipped in 1 HR to go with the 2 SB. And batting leadoff to boot, SAGNOF!

Giancarlo Stanton – One of the DHs is not hitting. He’s hitting .175 right now and has 1 HR to show for it. Provided he stays on the field I’m sure he’ll start mashing as he’s always done (when on the field).

Dexter Fowler – His season is over with a torn ACL. We hardly knew ye. Sad for him, but hopefully we might see Jo Adell come up sooner than later. His OF needed some work, so hopefully he’s had time to prepare.

Hunter Dozier – A nagging thumb injury has limitted his playtime so far. And thusly, limited his roster qualifications for me.

Charlie Blackmon – Has anyone seen Chuck? Asking for a friend.

Sam Hilliard – Where Hampson has benefitted, he has been cursed. Not getting everyday ABs is we all hoped for while he has road the pine even against some vs RHP. The Rockies have played 11 games to start this season, and he’s started in 3 of them while filling in during a 4th. Are you kidding me? He’s hit 2 HRs as well. Imagine if they’d actually play him. We has he done?

“Bud Black, what did Sam Hilliard ever do to you to deserve this? Did he make a move at your wife? Daughter? You?” https://t.co/zPqxiVgTQA

Christian Yelich – Off to a rather meh start (no HRs), but does have 2 SB and a .333 AVG. So that’s a good sign, but some run production would be certainly be nice to see from him. You know, what they pay him for.

Cody Bellinger – Been sidelined after taking a cheat to the calf. Who ordered the meat tenderizer? This happened not long after a HR for him was ruled a single with an out when Turner forgot how to run the bases. He sure finds himself in the strangest predicaments. There was no damage found and as of Sunday he took part in some agility drills, so may not be a big deal. Yet he already been on the shelf since after the game April 5th. He’ll be back soon… right???

Ian Happ – He’s also starting the season rather meh. Last season the he make big time strides in his quality contact metrics and was on pace for 30 HRs before he ended up taking a ball off his face which then led to a less spectacular finish. I expect him to get going soon so if he’s been dropped or someone is willing to sell at a discount, now’s a good time to scoop him up before the price jumps.

Trent Grisham – He’s back from an injured hammy and now has 3 HR in the last 3 games while batting .400, spicy. The big question though, is how do his legs feel? A big chunk of his value is tied to the steals, and I need that to bank on him. How soon before they let him test his swipes at the ATM? I got questions!

Lourdes Gurriel Jr. – What’s going on with LGJ? To start the season he’s hitting a paltry .154 with no HRs, no SB, and nearly zero counting stats. I bought this bird expecting a queen bee, but so far all I’m getting is him droning on with no flare! I want flare! He’s got a decent track record now of hitting excellence so expect him to wake up soon. Both last year and 2019 he started slowly before heating up with the weather and right now a .238 BABIP compared to a .326 career line and .257 xBA tells me there’s hope on the horizon. Another early trade target you might try to swing with an impatient league mate.

Kyle Lewis – Grey’s heartthrob Lewis should be back this weekend after dealing with a bruised knee from camp. Why does somebody always get their knees dirty at camp, especially Band Camp?

Now that season has started, our board has evolved to reflect “Rest of Season” values on top what has been done so far.

Nice work, love this site and all the blogs!

Should I market Baddoo for a trade? I’ve already got Soto, Hampson, Luis Robert and Santander (with Kyle Lewis waiting on IL). Roto league, 12 team.

Thanks for reading! Sure, probably a good idea. He probably won’t be worth more that he is right now. Everything is going his way at the moment.

Great article! How would you rank the following ROS, need to keep 2 OFs from this list:

Umm, not to be rude Alex…but, see list above?

those are pretty close, so depends on your needs and team build. If rest of your team is weak in steals but plenty of power, then you might keep grisham and Laureano. If opposite is true, then maybe Conforto and Reyes. And the 2 you don’t keep, are you trading them? who will get you more in return?

Thanks! Not a trade, only in an 8 team league so everyone has pretty good players. Looking for a bit of both, power and steals. Much appreciate the help and article!