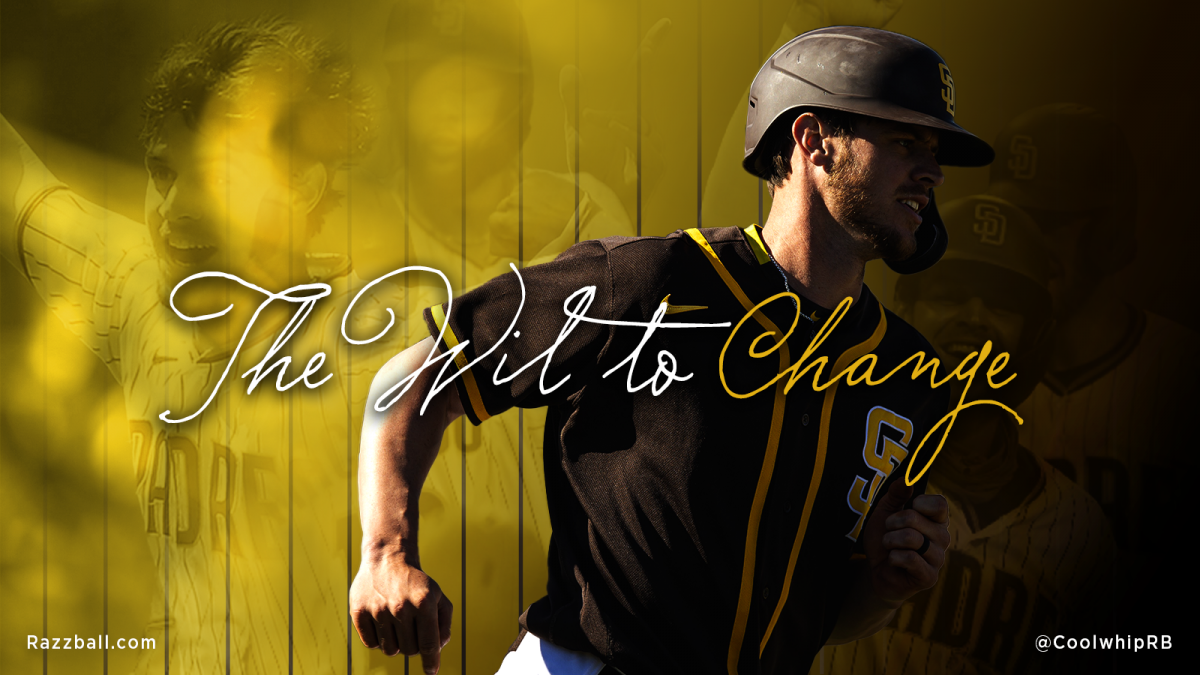 This is a piece I have been saving to write all winter long. The kind of short season that Wil Myers had, that the Padres had, was the stuff of legend. And equally so, that they fell short of the finish line getting knocked out by the Dodgers after the top of their rotation was unavailable like a plot right out of a Brad Pitt movie. We all saw the storyline of Slam Diego unfold, and Myers was at the center of it. The story of Slam Diego is not simply about a team getting hot and going on an incredible run (only to be cut down in the playoffs). It’s about a change in team philosophy and identity. And none perhaps in that lineup more evident than Myers.

I covered a large part of the Slam Diego script towards the end of the short season HERE. It’s a good read as I dusted off my scriptwriting skills for the Moneyball sequel, and it serves as a prequel to this deep dive. To start off here, lets borrow a portion of a chart from there:

The numbers in bold represent what was on-pace for career highs for those players in that category. A common thread with these 4 established players is that they each made gains in cutting their K% and increasing their OBP, all of which on pace for career highs in either OBP or OPS. Pay attention to our boy Wil Myers at the bottom who had the greatest renaissance. He ended up cutting his K% the most by nearly 9% (compared to 2019) and his OPS would have easily bested his best by .162 points! That is quite an improvement. Obviously, a short season factored into it some; but, the degree of improvement suggests there’s more going on here.

Here is how Myers has performed over the last 4 seasons. 2020 we saw a jump in his AVG without a jump in BABIP, which bodes well for some of those gains possibly continuing into this year should the rest of the data back that up. So the largest shocker, is the massive spike in ISO and SLG… wow. This might be responsible for some of the AVG as the big power output via HR does not factor into BABIP as, well, its not in play. His K/BB ratio has hovered around the same area with 2019 seemingly being an outlier for his K-rate with him returning closer to his career line (positive regression!). So let’s dive into his K-rates a little further and see if 2019 was indeed an outlier or a new normal he dodged in 2020.

As you can see above, Myers has a pattern to his K-rate ebb and flow throughout a season. At the beginning of each half-season his strikes out the most, then as the season progresses he adapts and I contend his feel for the zone and ability to read the pitch improves. In 2019, he started the season off really bad over 36% and never really recovered to a mark below 30 or even 25 like he usually does. He started the 2020 season at 33.3%, not surprising as the beginning of season is always rough for him. Not surprising with the irregular offseason, he then took off trimming it down all the way to 22.2% to finish the short season. If the season continued his usual pattern, his K-rate would have likely finished around 26.5% easily a rebound from the plate struggle of 2019. The big difference is the quality of contact.

I keep including the previous years in these charts to show context. Despite what some people think, the past matters. The past is context. Yes, 2020 was a small sample, though if statistics show a continuation of a previous track record, there’s a higher chance that its significant. The bolded stats for 2020 were top 7% for the league. Further context of his career-high 14.8% Barrel-rate is he was 13th in Brl/PA between Ozuna and Trout, as well as 14th in Brl/BBE(contact) between Trout and Freeman. That’s good company. His career-high Hard Hit% was good for the top 30. So how does that relate to his history?

That Hard Hit% is not far off from what he’s done before. In his 2018 season (88 games) he was right at the mark, and in 2017 his best full season he came within striking distance. We also see an improving Barrel-rate over the last 5 years (injury dip in 2018) so that increase is not out of character for him; same with his exit velocity. The improved contact quality looks to be on pace with his development, the question then becomes: is the jump in average without a jump in BABIP real? Is he simply making more contact?

The short answer is yes. But the full answer is his plate discipline improved immensely, even compared to his “best” season prior. These numbers likely would normalize some over a full season, but there is a clear improvement in most areas. His zone contact rebounded 2% higher than it was in 2017 while chasing the fewest pitches since then as well. He was hitting the pitches he should be, and trying for less of the ones he shouldn’t. Whats more, his first pitch swing rate was the lowest of his career, patience! And because of his new found patience and discipline his whiff rate regressed back closer to his career average. Hitting the pitches in the zone is good, but how good?

This brings us back to Slam Diego. The philosophical change that happened within the Padres organization. Its why they acquired Tommy Pham and Trent Grisham. And why they signed Hosmer long-term. They wanted a team that was patient at the plate and attacked the zone. Along with, you guessed it, getting on base. Wil Myers is probably the one that has benefited the most from such influences. In the heart of the zone he improved to a +17 run value and a total value of +21 that was good for 9th highest in the league last year 1 ahead of both Corey Seager and Trea Turner tied at 10th (Freeman was 1st).

He was able to identify the zone better and capitalized on it. And he did so by hitting secondary pitches better, especially sliders. Myers improved his previous xBA of .181, .185, and .174 to a now sterling .304 xBA and .735 xSLG! He conquered the pitch that was his primary weakness.

That’s great and all Coolwhip, but what’s the cherry on top? What does this mean for fantasy? I’ll tell you! Wil Myers current ADP is sitting around 128.63 in NFBC as the 34th OF behind the likes of Dom Smith, Dylan Moore, and etc. which I find laughable. Steamer has him as the 23rd OF and projections of 82/27/87/14/.242/.320 in 549 ABs. I think many of the projections are cheating him on average as they expect him to plummet back to career norms.

I love that value for him even considering his injury risk with the likelihood he hits more in the .260s with a chance to reach .270+ again. In the “2nd half” of 2020 his average climbed to .304 as he was hitting his stride. The upside of 30/15/.270 is too good to pass up at that pick range in the draft for me. I don’t see this new Wil (return of old Wil) leaving you stuck in the muck and myer.

Always been a fan of Wil Myers. He’s had injury issues and some different struggles. But when he’s healthy and given the freedom to play without fear of retribution, he’s a gold mine for fantasy. I’ll be rostering him again this year on at least two and probably three teams.

Will
Reply to  Harley Earl

Harley Earl
Reply to  Will

Now watch. Grey will make some snarky comments about Myers being an MVP candidate when he does his top outfielders column lol. He hates that I’m right about Myers! Because he has been SO WRONG about him!!!

Coolwhip
Author
Reply to  Will

Ha, I doubt we see that extreme, Mr Prorator tends get to forget about entropy; but, upside of 30+/15/.270 seems to be reachable if he maintains most of the gains we saw in 2020. Thanks for reading!

Will
Reply to  Coolwhip

His Statcast numbers in 2020 were outstanding. Hope he can repeat them.

Hey Harley, i figured you would enjoy this, ha. Thanks for reading!