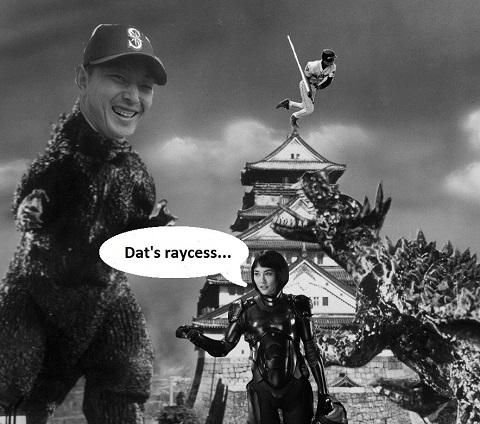 There have been many a fine years for a many a fine players in this 2013 Baseball season. As summer comes to a close and your mother puts her top back on, we can surmise the season like so — we have seen some good things, some bad things, and some strange things. Mostly because I’m including Tehol in the sample. Why? That matters less than you think. But this is why the game is played. And that point being established, I must say, Hisashi Iwakuma‘s year can be lumped in as a very fine year. A former Japanese starting pitcher, turned reliever by the Mariners, turned back into a starter by the aforementioned Mariners, Iwakuma has solidified the fact that he belongs on your Fantasy Baseball roster, including a 7.0 IP, 0 ER performance against the Cardinals last night. But to what degree does he belong on your roster? And are we doing Celsius or Fahrenheit? All important questions. Well, based on numbers, he looks to be around the James Shields, Jon Lester, Cole Hamels area. There doesn’t appear to be a crazy amount of regression due, the environment is a big plus, and there’s an okay history of health here. I’m willing to buy him in that zone next year. Anyhoo, here’s what else I noticed yesterday:

Jose Altuve — 2-for-4, 2 runs, 3 RBIs, and his 5th home run. He’s once again brought the steals, but without much power and a batting average closer to .300, he’s not really ‘All-tuve’, more like, ‘Fast-tuve’. Which is almost too clever.

Chris Archer — 6.0 IP, 0 ER, 3 baserunners (no walks), 7 Ks. Much like Sterling Archer, I find both to be a tad overrated, but they have their moments, and can provide above-average production.

Madison Bumgarner — 6.0 IP, 2 ER, 7 baserunners, 6 Ks. Nicknamed MadBum. Which to me equals a crazy-hobo, or, you know, taco-butt. Not exactly the pick of the litter here…

Robinson Cano — 4-for-4, 1 run, 2 RBIs. Should we feel disappointed that from all these hits, there were no home runs? I think they call this spoiled. Which, technically, is Cano’s fault. How dare he do this to us.

How do I feel about the Cespedes resurgence thus far?

Stephen Drew — 2-for-4, 2 RBIs. Looks like Stephen Drew up a great game plan tonight. I have no idea how I would have worded this if he was a writer, and not, um, a drawer.

Jacoby Ellsbury — Still has yet to resume baseball activities. Speaking of which, if I throw something, anything at someone or something, or, say, wear my socks really high, or, I don’t know, wear eye-black, are these not baseball activities? What I’m really trying to say is, how do know for sure that Ellsbury has done none of these things? For example, he must throw trash away, right? I mean, this whole thing could be a cover, and then where would we be? WHERE WOULD WE BE?

Prince Fielder — 2-for-4, 1 run, 3 RBIs, and his 24th home run. Not exactly the year we were all expecting. Then again, he is just a Prince. King Fielder is probably the guy we should be drafting here.

David Hale — 5.0 IP, 0 ER, 5 baserunners, and 9 Ks. His first Major League start for an injured Paul Maholm. The weatherman called for a strikeout-storm with a 100% chance of Hale. Weather puns bro.

Brad Hand — 5.2 IP, 4 ER, 7 baserunners, 4 Ks. If you’ve been following the Saturday Notes lately, you know that I sometimes meld in some Deep Impact series analysis when I can. And Brad Hand is a great place to do that, I so do declare. More likely a left-handed reliever, or what the fancy-pants call a LOOGY, there is a chance he remains a starter. Hand certainly has the repertoire to start, with a curveball, slider, and changeup to go with a low-90s fastball. The problem is, all of those pitches grade out to mediocre. If he can show some success, a mid-rotation starter ceiling is there for the taking, and something like Jon Niese could happen. Along with plenty of Hand-job jokes. So there’s a lot to root for here.

Chase Headley — 1-for-3, 1 run, 1 RBI, and his 11th home run. Homer Alert: Condition Desperate. Well, there are some signs of marginal improvement in the second half, and in the past two weeks, he’s been getting his hits and walks. But the power is still missing. Still a prospective buy-low for next season, but no other player, besides R.A. Dickey, has made me live up to my namesake in such an efficient manner.

Derek Holland — 3.0 IP, 6 ER, 9 baserunners, 2 Ks. Well, besides last night, there are definite signs here that Holland has turned a corner and transformed himself into a front-line pitcher. However, there are no signs that he actually is from Holland. The bigger question then becomes, is he maybe from Derek? Just move along, nothing to see here.

Clayton Kershaw — 7.0 IP, 2 ER, 8 baserunners (no walks), 6 Ks. I’m pretty sure Andrew McCutchen comes away with the MVP, but there’s a case to be made for Kershaw. Did you know that he is only one year older than Matt Harvey? /Mind Blown.

Howie Kendrick — 2-for-5, 1 run. His first action back since being activated from the disabled list earlier this week.

Mat Latos — 6.2 IP, 5 ER, 10 baserunners, 4 Ks. Someone should tell him that he’s missing a ‘T’ in his first name. Unless he accidentally put it in his last name. So, he really could be Matt Laos. I’m not sure where I’m going with this.

Brad Miller — 0-for-5. Can you believe people got upset with me for not including Nick Franklin in my Top-100 Keepers list? Oh, wait, what was that? I didn’t put in Brad Miller either? Err. Forget I said anything.

Jon Niese — 6.1 IP, 3 ER, 6 baserunners, 7 Ks. I once nicked him ‘Niese The Nose Job‘. I no longer wish to call him that. For this year, I’m going for something along the lines of ‘Niese, The Too Late To Help Me Out But Thanks For The Beginning Of The Season When You Persisted In Gross Negligence.’ I don’t know, has a pretty good ring to it.

Alexei Ramirez — 3-for-4. They call him Sexy-Alexei, and while I cannot make that physical determination, because chicks, bro. His overall fantasy value, which I can make a determination on, does not meet that criteria. So, for fantasy purposes, he shall be known, hence forth, as ‘Doesn’t Do Much Alexei’. It’s a refractory rhyme. Totally.

Hanley Ramirez — The Dodgers are still waiting on the MRI results on his hamstring. The history here dictates that we should start upgrading our level of panic by a factor of Yellow Alert. Let’s see how this plays out.

Colby Rasmus — 2-for-4, 1 run, 1 RBI, and his 19th home run. A good night after being activated off the 15-day disabled list from a left oblique strain. Has yet to be activated from the 1,460-day bust list. That one might last a bit longer.

How many RBIs did Rosario get?

Thanks bro. You answered my question.

Darin Ruf — 0-for-3. In 269 career plate appearances, Darin Ruf has hit 16 home runs and has slugged .526. Projected to a full season, that would be around 36 home runs. More importantly, why no one has nicknamed him ‘Ruf-Rider’ is beyond me.

Danny Salazar — 3.2 IP, 0 ER, 6 baserunners, 9 Ks. Was taken out early, not for an injury, but for throwing like 187 pitches in just three innings. On top of that, I always call him Denny Salazar for some reason. Could it be how I feel about Moons-Over-My-Hammy? Or that maybe every Danny I’ve ever known was a jerk? Quite possibly both.

Jarrod Saltalamacchia — 2-for-3, 2 runs, 4 RBIs, and his 13th home run. The leading cause of carpal tunnel syndrome among baseball writers.

Giancarlo Stanton — 2-for-4, 2 runs, 2 RBIs, and his 21st and 22nd home runs. I will never believe in you again. Until next year’s draft, when I will surely convince myself that you are to be believed in again. Such is life, the cyclical aspect of it all. Something-something wax poetic.

Nick Swisher — 1-for-3, 1 run. It’s not that I want to talk about Swisher, but no one else really did anything production-wise for the Indians. So yeah, once I passed Michael Bourn in the box score, I just pulled an ‘ef it’ and settled. They now call this ‘Swish it’. So there’s that I guess.

Hector Santiago — 4.0 IP, 3 ER, 9 baserunners, 3 Ks. Like the lede, Santiago was once a strong bullpen piece that was moved into the starting role. While the control doesn’t always show up, the K’s do, so if you have room for a high-WHIP, high-strikeout guy, this is who he is.

Stephen Strasburg — Was scratched from yesterday’s start with right forearm tightness. That’s why God created the stranger. Do it.

B.J. Upton and Justin Upton — (B.J. DNP, which is a net positive.) 2-for-4, 1 run, 1 RBI, and his 25th home run. In a first for my Saturday Daily Notes, allow me to introduce a conversation I had with the Upton brothers:

Jaywrong: “Hey guys, I hope you don’t mind, I’ve just started lumping you two together into my notes, because I really don’t care anymore. Just, you know, you guys are, ugh. Ya know?”

B.J. and Justin: “Oooo. Slider in the dirt. Hold on right there, we gotta go chase that.”

Adam Wainwright — 8.0 IP, 1 ER, 8 baserunners, 6 Ks. I remember the days when I used to be part of the ‘Right’ family. Treat it with care Adam. For let me be the lesson, that one day, you shall be known as Wainwrong. And tears will flow.

Ryan Zimmerman — 3-for-5, 3 runs, 1 RBI, and his 24th home run. On one side of the coin, he can have nights like this. On the other side, oblique explosion. If you want to flip that coin, by all means, go for it.