If you’ve been focusing on the NFL Draft this week, I’m happy to report we’ve had another exciting week of baseball. The Mets combined to pitch a no-hitter against the Phillies this past Friday, Bryce Harper and Mike Trout earned their 10th year of MLB service time (I feel old), and yes – something is definitely up with those baseballs.

Before we dive into the top 25 second basemen, the below tweet caught my eye that Ryan M. Spaeder retweeted from Grant Paulsen earlier this week I wanted to share with you all:

I’m no conspiracy theorist, but make of the below as you will, keeping in mind as the optimal launch angle for home runs is between 25 and 30 degrees:

Albies has started off slow in the batting average department, but is showing great pop and is in the middle of a deep lineup that just welcomed back Ronald Acuna Jr.

Lowe is batting under .200, but he’s still hitting the ball hard as he normally does. His average exit velocity this season is in the 90th percentile, so I’m confident the counting numbers will come in time.

France is off to a hot start, and his underlying stats suggest he’s been a legitimate force. For you WAR lovers, he makes the top 5. According to wRC+, he’s 130% better than the league average hitter. Ty’s Savant page backs up the strong start and his triple 1B/2B/3B eligibility is gravy. France is the biggest riser in the ranks so far, and another few weeks of his current pace will bump him up a tier or so. 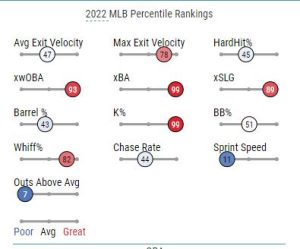 Tier 4 – The Last of the Mixed League Starters:

Speaking of triple-eligible players in our game, DJ LeMahieu has been been the spark the Yankees desperately needed, looking like his old self. DJ is hitting .300, and scoring plenty of runs with a .370 OBP. After an injury-plagued 2021 and dealing with an October sports hernia surgery, perhaps I was too quick to write DJ off.

Whit Merrifield is my biggest faller, as he owns a 4/0/4/.141/.190/3 slash line entering the weekend. His sprint speed is still in the 90th percentile, so the speed is still there, but the old adage says you can’t steal first. 2022 is looking like a long season for Merrifield owners.

Sheldon Neuse has my attention in this tier. While he’s always been a high BABIP player throughout his time in the Minors, Neuse will likely not sustain a .400+ BABIP in the Majors. Neuse is in the top 1oth percentile in line drive rate, he’s been batting second in the Oakland A’s lineup and is exhibiting a nice blend of pop and speed. He’s definitely a useful player in deep leagues, and a .260 line with 15 homers and steals is not out of the realm of possibilities.

That’s it for now, have a great week!

I am waiting for Tatis to return. My MI has been Wong. Based on this article you recommend replacing him with Neuse? My other choices are Gimenez, Wendle,and Kim. Standard 5×5 roto, 10 team. Thanks