Happy Weekend to my Razzles from your Reporter of Fragiles!

This week’s report will begin with a moment of silence for Kris Bryant. He was not off the IL for long, but he did come off of it. For a minute. While I am certainly breaking some sort of Razzball policy by showing you this, the baseball writers were in agreement: Kris Bryant is a dreamy guy. 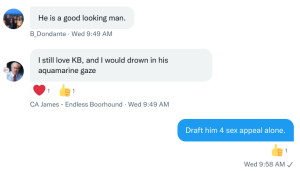 Today, we salute KB (not me; the dreamy one) but more importantly, we salute those of you who believed in him and hung on. Maybe you are still hanging on. Maybe you will hold on for one more day (yes, this is a Wilson Phillips reference), and if you are, maybe it is time to let go. 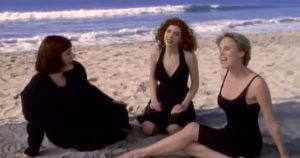 Now, let’s roll out the rest of the bodies.

Joe Kelly (RP): Oh no, Joe. Kelly  is back on the IL with a strained hamstring. He returned just four weeks ago from a lengthy rehab for a biceps nerve injury. Kelly is eligible to be activated on June 10. Tanner Banks will replace Kelly in the interim.

Joe Kelly gets Cordero swinging, but leaves the game with a trainer right after the pitch pic.twitter.com/jepSjo9god

Luis Robert (OF): Robert has been out with “flu-like symptoms” and will likely not return until next week. During Robert’s absence, White Sox continue to use Andrew Vaughn in strange ways. In this case, Vaughn has been playing in the outfield along with regulars A.J. Pollock and Adam Engel.

Franmil Reyes (OF): Reyes hit the IL with a strained hamstring. He has had lingering hamstring this season, but this particular instance is not considered serious per Terry Francona. He is eligible to return June 4. Rookie Richie Palacios will replace Reyes during his absence.

definitely noticed something off with Franmil Reyes as he was going into 2nd on this play. Looked frustrated at the end, too. pic.twitter.com/DPqhkdb2hC

Will Vest (RP): Vest is out with COVID-19. He is reportedly no longer COVID-19 positive but still on the IL. Drew Carlton was called up while Vest is out.

Amir Garrett (RP), Kyle Isbel (OF): Garrett and Isbel both landed on the COVID-19. Dylan Coleman and Brewer Hicklen were brought up to fill the roster.

Gilberto Celestino (OF): Celestino went on the COVID-IL on Friday. Danny Coulombe has been activated from the IL to fill Celestino’s roster spot.

Gilberto Celestino will be going on the COVID IL today for the #MNTwins. Danny Coulombe will be activated from the 15-day IL.

Cody Stashak (RP): Stashak is out to heal and rehab a shoulder impingement. He is eligible to return on June 6. Trevor Larnach was recently reactivated and is now eligible to play.

The #MNTwins have activated Trevor Larnach off the IL. To make room,
Cody Stashak is placed on the 15-day injured list with a right shoulder impingement.

Spenser Watkins (SP): Watkins is out with an elbow contusion. He is eligible to return on June 7. The Orioles recalled Marcos Diplán, Logan Gillaspie, and Beau Sulser to fill in various pitching gaps.

They have placed Spenser Watkins on the 15-day IL and optioned Tyler Nevin and Mike Baumann to Triple-A Norfolk. pic.twitter.com/LCQqZHoJYT

Aroldis Chapman (RP): Chapman is on the IL with Achilles tendinitis. While he is eligible to return on June 7, the outlook and timeline have been, at worst, grim and, at best, foggy. Yankees fans don’t seem to miss noted domestic abuser Chapman since Clay Holmes has taken the reigns.

Josh Donaldson (3B): Just days after making an idiot of himself by calling Tim Anderson “Jackie”, Donaldson went on the COVID-19 IL. Donaldson has now been transferred to the 10-day IL with shoulder inflammation. The move is suspicious, but Miguel Andujar reaps the benefits as he replaces Donaldson in the line-up.

Prior to tonight’s game, the Yankees made the following roster moves:

Giancarlo Stanton (OF): Stanton, who has been on fire lately, is out with inflammation of another sort: ankle inflammation. Stanton is eligible to return on June 4. Aaron Boone shared that Stanton’s injury is not serious and he should be back when eligible.

Abraham Toro (INF): Toro is out with a sprained shoulder. Sam Haggerty has been recalled to fill in for Toro. Toro is eligible to return on June 1.

Yan Gomes (C): Gomes is out with a strained oblique. He is eligible to return on June 3. The Cubs recalled Nico Hoerner, and Willson Contreras has been catching more in place of Gomes.

Catcher Yan Gomes was placed on the 10-day IL (retroactive to 5/24) with a left oblique strain. pic.twitter.com/WF9arq6wSl

Freddy Peralta (SP): Peralta is out with strained lat. He is eligible to return on June 7. Aaron Ashby will replace Peralta while he is on the IL and rehabbing.

Freddy Peralta will stay in Milwaukee and have a MRI on the right shoulder tomorrow. He reported tightness in the back of the shoulder in the mound visit , Craig Counsell said he’ll go on IL.

Heath Hembree (RP): Hembree is out with a strained calf. Roansy Contreras will take Hembree’s place until he is eligible to return on June 5.

Roberto Pérez (C): Pérez suffered a season ending hamstring injury that required surgery. He will be out for the 2022 season. Andrew Knapp will continue to have a big role in the Pirates organization.

Daniel Vogelbach (DH): Vogelbach is out with a strained hamstring. He is eligible to return on June 3, but Cal Mitchell will replace Vogelbach on the roster until then. Yoshi Tsutsugo has been performing DH duties as well.

Dylan Carlson (OF): Carlson is out with a strained hamstring. He is eligible to return June 1. Lars Nootbaar , who is doing swell, will replace Carlson.

Cardinals tack on another run now as Lars Nootbaar hits a grounder to Tellez at first base.

Tellez throws home but Sosa was going all the way and scores to make it 4-0.

Jordan Hicks (SP): Hicks is out with a strained forearm. He is eligible to return June 9. Jake Woodford was recalled to replace Hicks.

Steven Matz (SP): Matz is out with a shoulder impingement. He is eligible to return June 7. Matthew Liberatore will replace Matz while he is on the IL.

Kris Bryant (OF): Well, well, well, if it is not the poor guy of the hour. Bryant continues to have issues with a strained lower back. He is eligible to return on June 2 and has been doing some light workouts.

Kris Bryant is currently playing light catch. It’s the first baseball activity he’s done since being place back on the IL with a lower back strain (retroactive to May 23)

Curt Casali (C): Casali is out with a concussion. He is eligible to return on May 28 and is expected to be back.

Brandon Belt is eligible to come off IL on Sunday, but he's still back in San Francisco rehabbing.

Kapler said he expects Casali to be activated once eligible Saturday, but that it could be a few more days for Belt.#SFGiants injury updates: pic.twitter.com/4rGWecQUoJ

Austin Slater (OF): Slater is out with wrist inflammation. He is eligible to return on June 2. Stuart Fairchild will fill in Slater’s spot until he returns.

That’s all folks! Have a great week, and good luck out ther!

Got any questions, comments, or feedback? You know I love to hear from you in the comments or on Twitter. Write me some mail!

any thoughts about sitting or starting Merrill Kelly at home against Dodgers Tony Gonsolin. what would you do?

i have Kris Bryant and was going to hold till the beginning of June. would you?

2. i also have Freddy Piralta and was going to also keep him on my roster? what would you do?

3. i did cut Mike Clevinger. what are your thoughts on him?

For KB, I think it depends on what kind of league you are in and how attached you are to him. So for me personally, I would not hold onto him. I’m not sure who is available in your league or the set up, but assuming yours has been picked over, I’ve been finding modest success with Patrick Wisdom and Edwin Rios in 3B.

I had Freddy P. and dropped him yesterday because it’s reported he will miss “a significant amount of time”.

Agreed on your Clevinger move for the interim, but it looks like he might come back (slated to start the game on June 5). MacKenzie Gore has been taking Clevinger’s spot, but he got injured recently as well.

Javy Baez isn’t hurt, but he is playing like it! Thanks for the info!

I have him in one of my leagues and it has been rough. The thumb.

Yes, he will make it next week’s edition. The need for an MRI is disturbing.

Sometimes, you see guys ready to go off and get hurt.

Toro was STARTING EVER SO SLIGHTLY swinging well and got hurt.
Same with Senzel earlier in the season, and he got Covid. Hoping Senzel puts it together.

Yeah seemed like he was turning it around. Really terrible timing for any leagues and the Mariners.