The highest rated two-start starter on the Streamonator who is owned in less than 70% of RCLs is, gulp, John Lackey. The ‘nator likes him at a $13.90 value for his starts against the Chicago White Sox at home and the Milwaukee Brewers on the road (does anyone one else close one eye and grimace every time they write Milwaukee and wait to see if spell check flags it or not?). Here is the full list of players Streamonator gave a positive value who are owned in less than 70% of RCLs:

I rank those three Lackey, Chacin, Snell, with Lackey in the Replicas tier and Chacin and Snell right next to each other in the Standards tier. I think the Cubs have a big second half (and look, they’re already on their way), and I think Lackey has a chance to bounce back, too. However, when you take an initial glance at his numbers, they look, well, not great. But let’s take a closer look at Lackey and his short term value.

His 5.04/5.69 ERA/FIP is not ideal and, more importantly, tells us that he has been more than just unlucky. He has earned his ERA thus far. But let’s take a quick look at his career FIP: 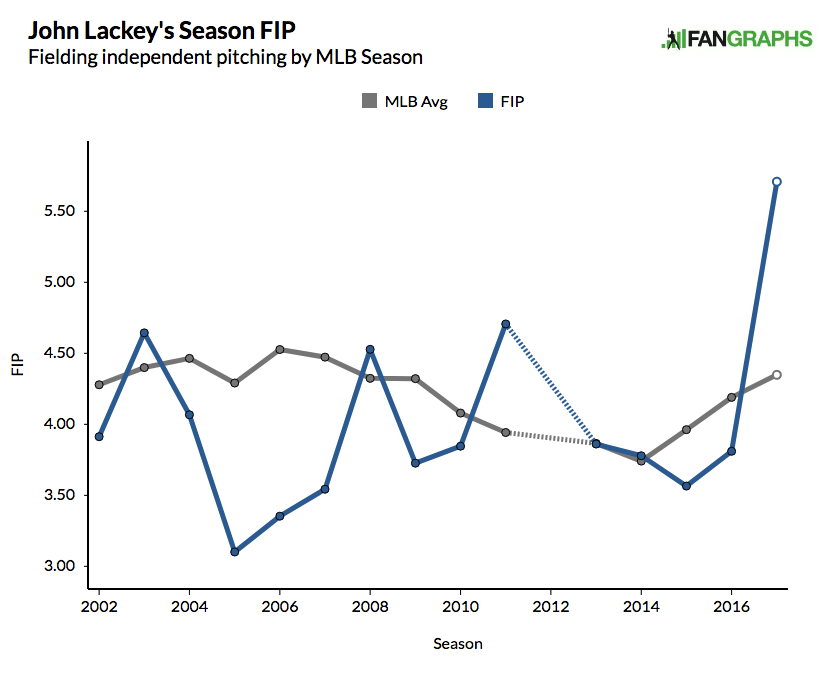 This chart leaves us with an important question: Will Lackey’s numbers come back down out of the clouds to his normal ranges of fluctuation, or, at almost 39 years old, is he just done? If it is the former, then we might have one of the better pitchers in the league available as a buy-low, or, at the very least, a streaming option in the short term. If it is the latter, then this argument is essentially over.

Lackey, like pretty much everyone on the Cubs, had a rough first half. His main problem was serving up dingers. He doubled his HR/9 from 1.1 in 2016 to 2.2 in 2017. But that has not exactly been a rarely seen problem in 2017’s version of baseball. Home runs are up across the board, so Lackey is certainly not alone there. Let’s add HR/FB% and Hard% to our FIP chart: 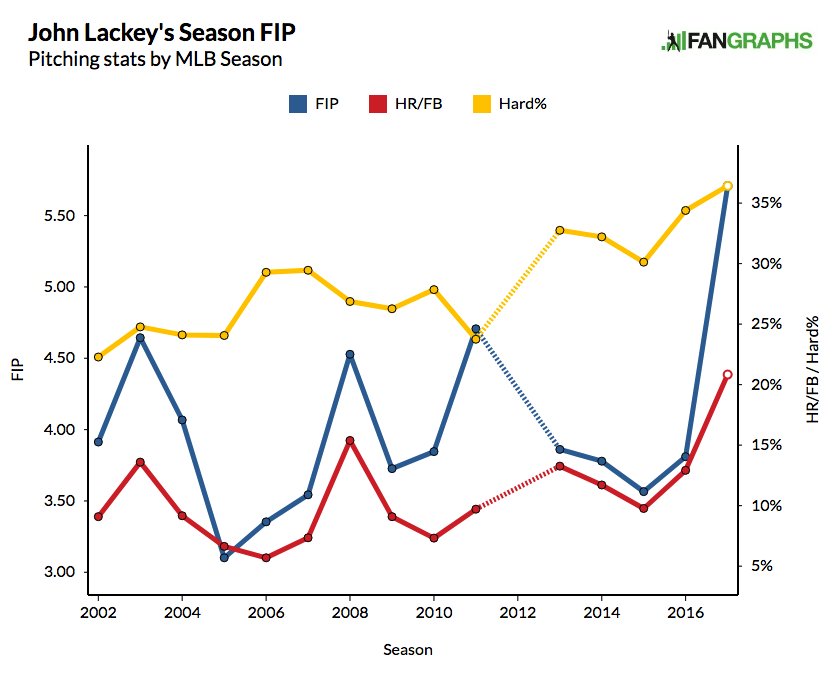 His Hard% and HR/FB% are both career highs (read: not good). However, his Hard% only increased from 34% to 36%, and he has been up above 30% since 2012. His HR/FB%, though, jumped from 13% all the way up to 21%. Could a 2% increase in Hard% lead to an 8% increase in HR/FB%? Sadly, in our current Super Ball Era, the answer is probably. Some of that is probably bad luck, but with the way balls are flying out of ballparks any increase in Hard% could lead to a pretty drastic increase in home runs, especially if the overall FB% is up, too. Ahem: 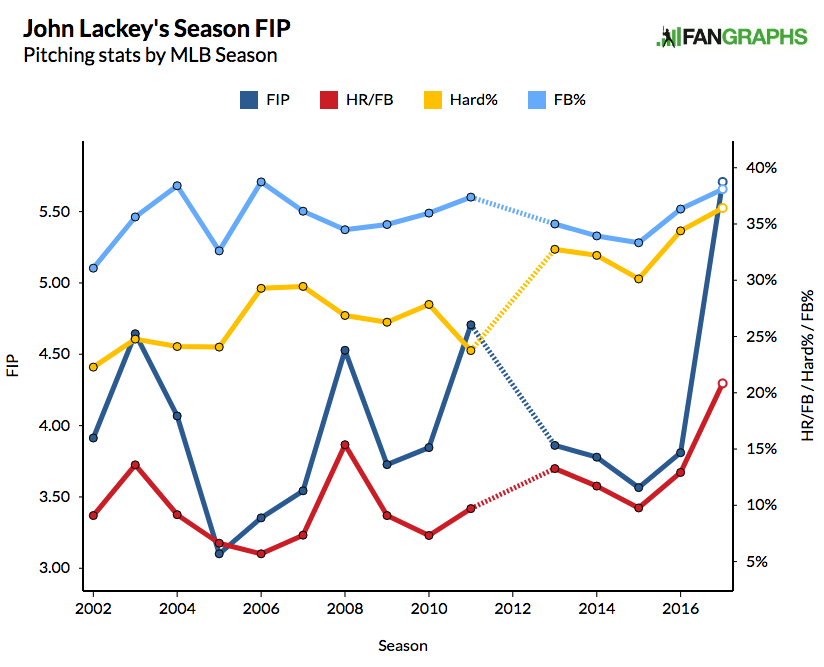 Lackey’s FB% is up from 36% to 38%, and it is up steadily since 2015 when it was 33%, his lowest since 2005. In fact, everything on this graph is up since 2015, which is no bueno. Unfortunately, there is some more evidence that suggests this has been more than just some bad luck and that there could be even darker times ahead: 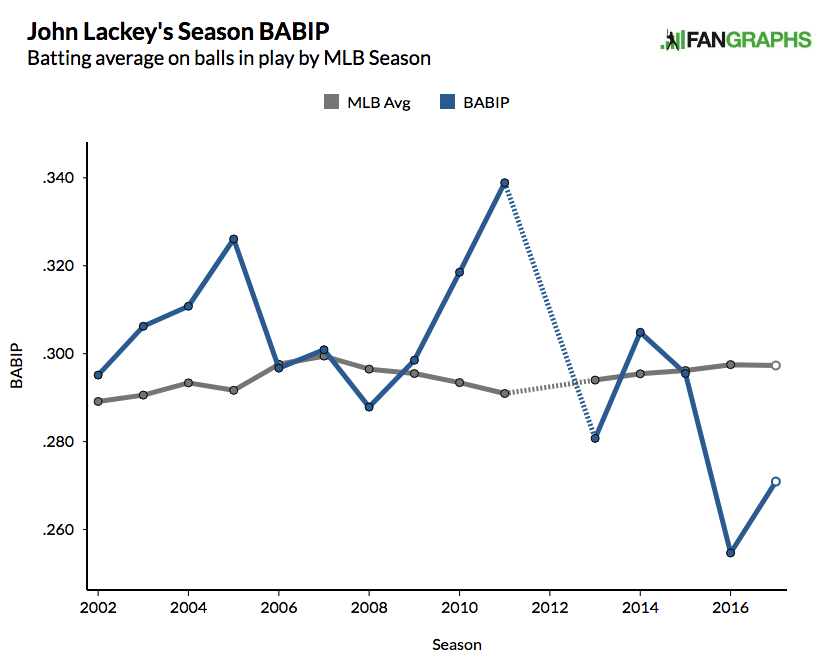 When you look at the rest of his numbers, though, not much else jumps out. The strikeouts are OK (though down from last season), he isn’t walking many more batters than usual, and his GB% is actually slightly up. He has, however, lost 1 MPH on his fastball. And with MLB changing the way they measure velocity, that number should actually be UP, if anything. So, that is another cause for concern.

The main problem, as we just spent all this time talking about, is the home run. If Lackey can keep the ball in the ballpark, he could very well have a solid second half. If he can’t, well, you’ve seen the charts above. It’s not pretty. For now, he is a streaming option when the matchups call for it. This week, especially with what should be a somewhat rejuvenated Lackey, are matchups that call for it. Streamonator likes him this week, and I am not one to argue with Rudy and his algorithms.

Here is the rest of the list for this week. 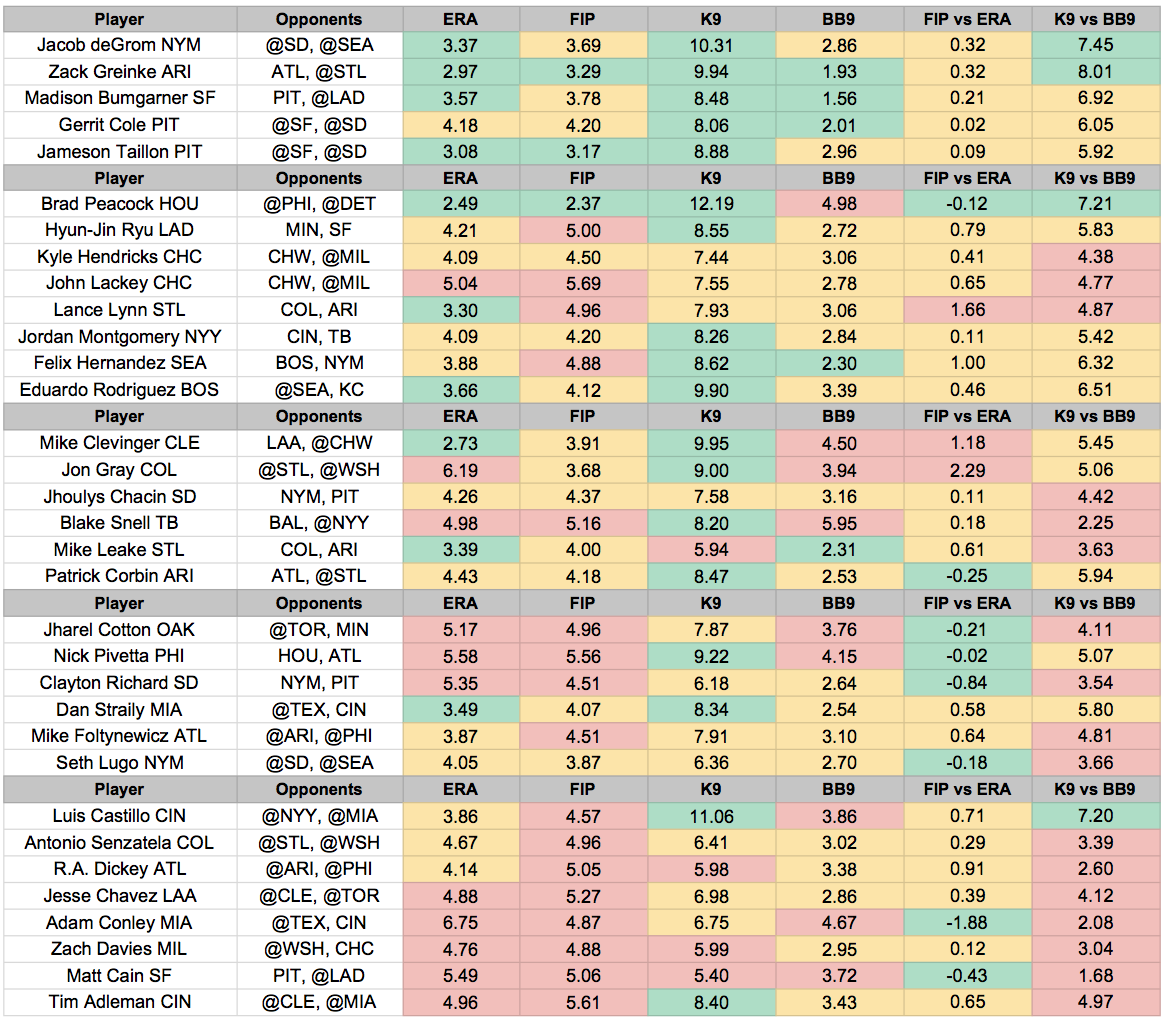