Greetings and welcome to the last Two-Start Starters post of the year. With it being the last week of the season, make sure you take this list with the biggest grain of salt you can find. Just stay away from the bath salts. That will lead to entirely different issues in the coming weeks.

For the last week, obviously, our problem is that these rotations are written in pencil. As more and more teams clinch the playoffs and become locked into their spots, they will rest starters. Some teams, looking ahead to a potential one-game playoff (which is the dumbest thing baseball has ever decided to do, but that is a rant for another time), may even tweak their rotation to get a certain starter lined up for that crucial game. So, disclaimer over. Take this list as a starting point, but know that it could be very fluid throughout the week.

The first thing you may notice is that Chris Sale is scheduled to make two starts, but I did not include him in the rankings. That is because that second start is not a certainty by any means, and I would argue it is very unlikely. If the Red Sox have already clinched the division, there is little chance he starts or, if he does, that he pitches deep into the game. If the Red Sox might be destined for a Wild Card Playoff game, then they will likely want to keep Sale fresh to be able to start that game. Sale is obviously still worth starting for his one start, but don’t bank on getting two starts from him this week.

There are others who are probably in similar situations. I removed Dallas Keuchel, Jon Lester, Luis Severino, and Jake Arrieta because I would avoid them strictly for two start purposes. Obviously, those are still pitchers worth starting; they just are not reliable options if you absolutely need two starts. While I left them on the list, I would also avoid Yu Darvish, Alex Wood, and Carlos Martinez.

As for the Streamonator picks for this week, there are actually seven starters with positive money values who are owned in less than 75% of RCLs:

Blake Snell has easily the best value of the week, though he does have to go up against the Orioles and the Yankees. For his second start, though (assuming he makes it), you have to wonder if he will be going up against a full Yankees quad. More likely than not, he will not be. Makes him that much more appealing in a tough week for options…

Junis has the next highest value, but his first start is against the Diamondbacks. In the fantasy baseball playoffs, count me out. Stream if you must, but don’t put that evil on me. Matt Moore has shown us this season that he is Matt Moore. No Moore, no Less. Flip a coin to decide whether or not he is going to be good this week. Sabathia has been solid lately but is always good for the occasional dud that could kill your stats. Felix Hernandez could get shut down before his last start if there is nothing left to play for, or he might get pulled early. And for the last two, I would definitely gamble with Kuhl over Nolasco.

And now, to the charts! 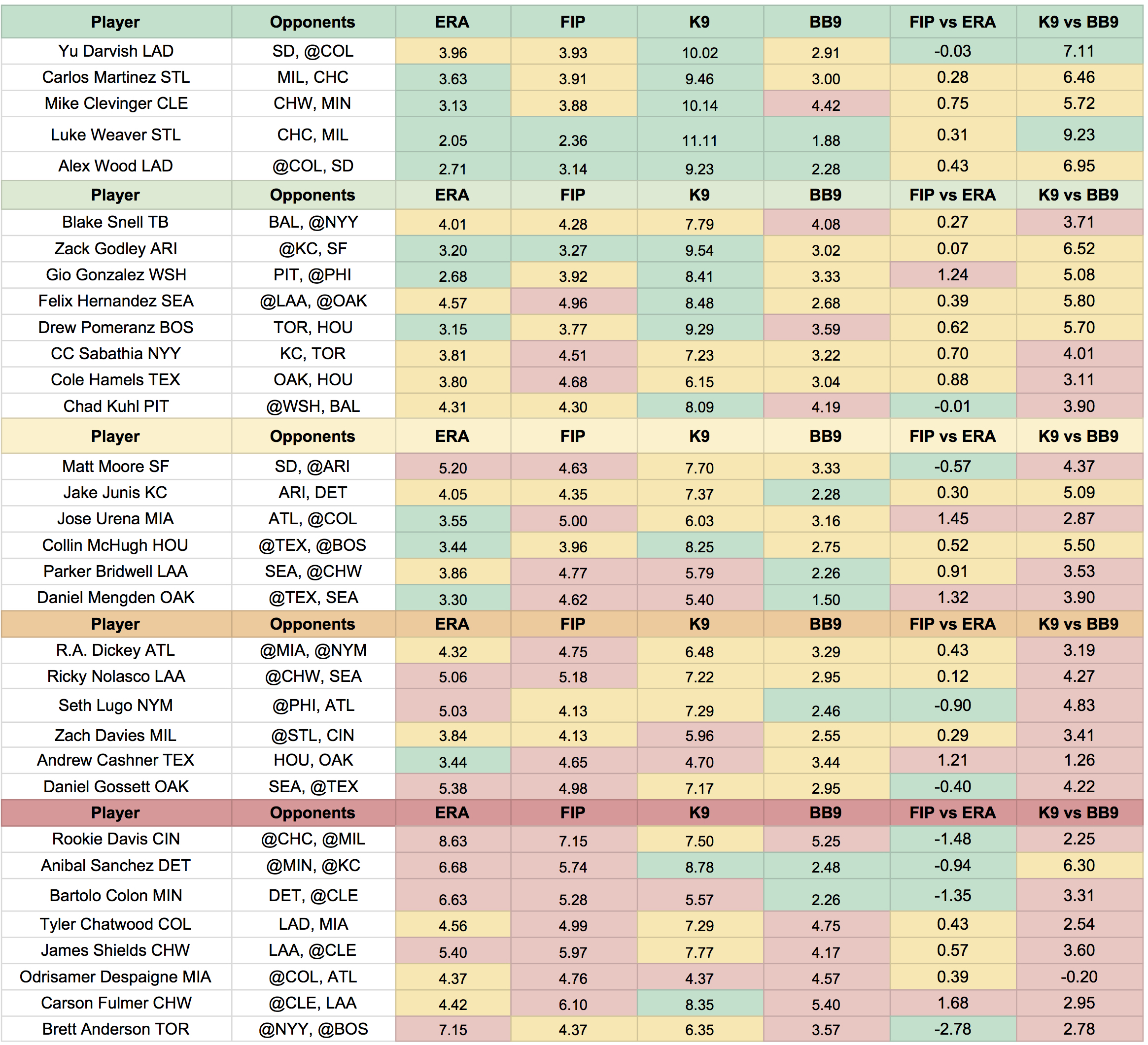 I don't want to say because others in my league read this site.

Well Cobb got shut down on me and Severino missed his start. I have 2 moves left and there is a better than average chance I will miss innings pitched on the final week for the championship!!!!

What is the feeling on Brett Suter vs the Reds tomorrow? I need innings badly!!!

mikeMaher
Author
Reply to  I don't want to say because others in my league read this site.

@I don’t want to say because others in my league read this site.:

He was bad in August but has been better lately. I like it for taking a shot.

I don't want to say because others in my league read this site.
Reply to  mikeMaher

With so many changes over the past weekend – this is a difficult task to do. Clevenger, Godley, GIO, and a few others all got moved around. I think Ryu may tale Yu’s last start since Ryu was taken out so early.

If you are still playing – best to take any predictions with extra salt grains.

Mike Clevinger was moved to the Bullpen