The list of two-start starters for Week 16 is pretty ugly. Not only did it take some time to materialize as teams figured out their rotations following the All-Star break, but once the dust settled and we had a good idea of who would be starting when many of the names we were left with were not all that appealing. Sure, the high-end options like Kershaw (for now), Strasburg, and Greinke were there, but the meat and bones of the list were lacking.

Just ignore Clayton Kershaw. At this point in the season, I am convinced that Dave Roberts reads this post every week and then trolls us all by changing his rotation on Sunday night. He is at the top of the list as of this writing, but that could easily change in the next few seconds. The Dodgers have a dozen or so possible starting pitchers, and Roberts shuffles or adjusts his rotation pretty frequently.

One name to take a look at this week is the soft-tossing Brent Suter. While he does not exactly light up the radar gun, he has been very effective in his recent stint as a starter for the Brewers. In his last two starts, he shut out the Orioles over six innings while striking out eight and then allowed just two earned runs over 6 ? innings against the Yankees while striking out five before the break.

Throughout his career in the minors, Suter has been consistently solid-yet-unremarkable. In other words, he has never really been great but hasn’t been bad, either. He has a 3.44 ERA across six seasons in the minor leagues while throwing to a 3.12 ERA during his time in the show. His 2.96/2.78/8.23/2.63 (see chart below) is also solid.

Streamonator does not like him as much as I do. The ‘nator has Suter up around its 20th best option or so (with a negative value), while I have him at the top of the Standards category below, which puts him around 15th or so. He is, however, only owned in 1% of all RCLs, so he should be available to everyone reading this except the one person who is in the league with that one guy or gal who already picked him up.

If you are in need of an arm in the short term, especially in a two-start week, you can do worse. You can do better, too, but I like Suter as a guy who can offer some solid short term numbers. Other guys Streamonator likes for the upcoming week who are owned in less than 50% of RCLs: Matt Moore, Zack Wheeler, and Rafael Montero. 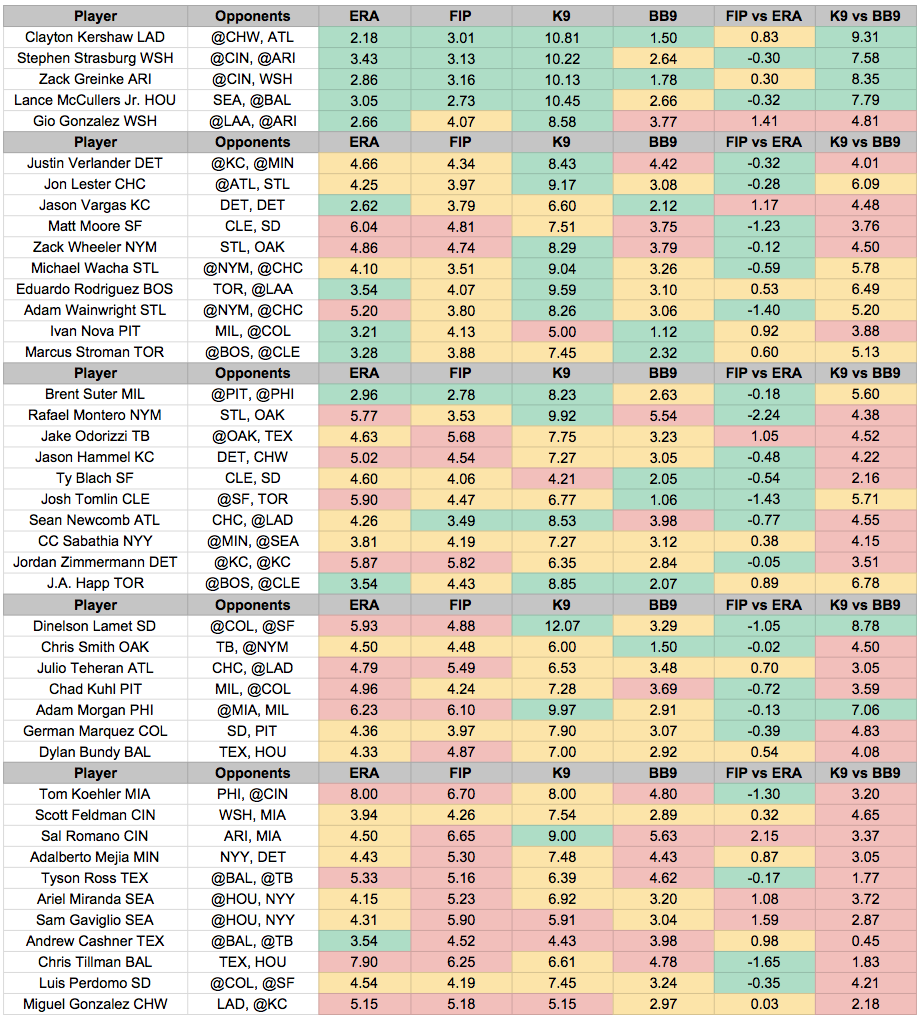 Shouldn’t Ray be getting 2 starts this week? He goes Tuesday which would line him up for a Sunday start. Where would he slide in?

Yeah, swapped with Greinke. He is in that top tier for me.

Hi Mike, in a POINTS league I need to bench 2 of these guys:

Would you drop either Nola , J A Happ or Danny Duffy for Danny Salazar?

I like the upside of Salazar but at this point, no, probably not. Salazar is a high ceiling/low floor guy right now, and I think the three you have now are safer.

Does the trade of Doolittle and Madson reduce the value of Oakland SP’s? Specifically Manea?

Good question. Possibly? But not really in any way that is predictable or quantifiable, if that makes sense.

I would rank them the way you have them, but I would check Ralph’s Top 100 Pitchers post tomorrow to see where he ranks them, too.

Thanks for that info!

Depends on your team but I would actually lean Pujols

@mikeMaher:
Yeah its tough to consider dropping a hall of famer. Ive been holding Pujols and Frazier all season and they’ve given me nothing. Conforto has been struggling but at least he has upside. I have Smoak/Thames to play at 1B.

Yeah, I hear you. The reason I hold Frazier for now is I think he will be hitting in Fenway in a couple days.

@mikeMaher:
Yeah. Tempting to plug him in that stacked lineup in Fenway.

Trying to find info on Verlander for the Tuesday start, I’m seeing him listed as going Wednesday, just wondering if there is some news that I missed that something has changed?

It was assumed that Verlander would start Tuesday but now looks like he is scheduled for Wednesday and Tuesday’s starter is TBA.

Madson and Doolittle both headed to Nats. Who’s the favorite to close?

Madson I would assume.

@mikeMaher: Can you elaborate? I’ve held on to Doolittle for a few weeks for this moment. Gotta choose between starting Miranda or Mejia or Doolittle.

The Nats haven’t said anything but my initial assumption was that Madson would close. I also read that Madson was their primary target and that Doolittle was a bonus for them, so that would indicate they like Madson for closing duties.

Also, if it matters for you, neither of them are pitching for the Nats on Monday. They won’t be with the team until Tuesday.

@mikeMaher: @mikeMaher: Thanks for the reply! I’ll keep on the bench this week to see how it shakes out. Lineups are set weekly on Monday.

I stand in 7th in a keeper league and was given an offer by the last place team:
Give: ($ is amount player would be kept next year)
Trea turner ($7)
Robbie ray ($4)

Is this a no brainer?

My team:
C: Avila
1B: Goldschmit
2b: Dozier
3b: castellanos
SS: peraza
Of: j.d. Martinez
Of: ozuna
Of: kemp
Of: d Santana
Util: alonso
Util: Morrison
Be: marte
Be: scheblee
DL. Trea turner

Thanks in advance boss!!

@Milkman: I’d keep Turner. That return isn’t quite enough and prices aren’t as good as what you’ve got. If you really wanted to deal Turner I think you could do better both talent- and price-wise, and you shouldn’t have to also give up Ray in this scenario anyway.

Yeah. That is a good return but you would be selling low on Turner.

Two start Vargas at spacious Kaufman, where he’s done very well v two LHP killers in Det and ChW or Wacha on the road, where he hasnt pitched well at all @ Mets and the over rated Cubs? Or neither because i have other one start options i.e Castillo, Nola and Godley?

Maybe not your best guess there, huh? Like I alluded to, Tigers and CHW “moiduh” LHP