Spring Training is finally underway, more and more free agents are off the board, and trades are being made! This week we’ll be taking a look at second basemen. Second baseman as a whole this year seem to be shallower than shortstops and free agency doesn’t seem to have made a huge impact on the rankings for fantasy purposes. Let’s get to the rankings:

Editor’s Note: Make sure to check out our Razzball Commenter Leagues and sign up for one, two, three, or more!  They are free to play and the overall winner gets a Razzball gift basket.  Play against your fellow commenters, lurkers, and Razzball writers!  We have this league drafting at 8 PM ET TOMORROW (TUESDAY) NIGHT<- Just click and you’re in!

Trea Turner is my new #1 overall player, already went over him and my rankings formula in Last Week’s Article.

As of Sunday, 3/20/22, Trevor Story has signed with the Boston Red Sox and will likely play second base. Since he is not currently second base eligible I didn’t rank him with the second basemen, but he would be towards the top of this tier once he is eligible.

It seems like Betts has recovered from his hip issues from last year. I’m not sure the Dodgers have Betts run as much as he did in years past, but at age 29 he should have another year or two before the steals start drying up. Most projections have him around 100/30/85/.280/15 and while Betts may not return to his MVP form, he should still be a highly-desired fantasy asset, especially since Betts has second base eligibility in Yahoo.

Brandon Lowe and Max Muncy are my players to watch from this tier. Reports indicate that Muncy is healthy and will be ready for Opening Day (assuming the Dodgers don’t do something crazy and have Muncy pitch). Elite power from Lowe and Muncy are what I’m targeting from second base (35 homeruns with 160+ R/RBI) if I miss out on early rounders Trea Turner and Ozzie Albies.

I’m high on Brandon Lowe (look at all that red on his Savant page below). Not only does he hit the ball hard, but Lowe has also made great gains in his contact rate and strikeout rate throughout last season, especially in the second half. Last year’s .247 average has a good chance of improving to the mid .250’s – low .260’s this season. The added potential for 30+ HR’s. 160+ R/RBI, and 5-7 SB’s make Lowe a great fantasy asset. 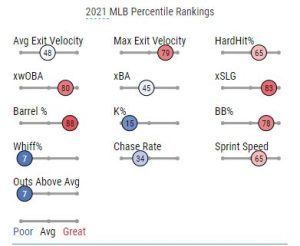 Tier 4 – The Last of the Mixed League Starters:

When looking into Whit Merrifield’s Baseball Savant page, I was pleasantly surprised to see that his sprint speed is still high (87th percentile). Merrifield is 33 years old and while I would be OK drafting him this year if I needed speed, I think this is the last year we see a season we’ve grown accustomed to seeing from him (90/12/70/.280/35). 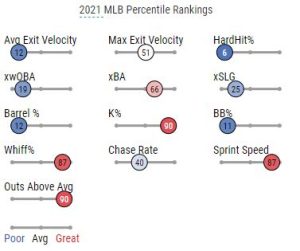 A player from this tier that intrigues me is Ryan McMahon. McMahon has always teased a breakout and has seemingly alternated strong first and second halves over the past couple years (excluding the shortened 2020 season). McMahon cut his strikeout rate from 29.7% and 34.2% (2019 and 2020) to 24.7% in 2021. A player that has made batting improvements, is entering his age 27 season, and that calls Coors Field home certainly has my attention.

The player from this tier that has the greatest potential to jump the ranks and ADP is Gleyber Torres. Some are concerned his great 2019 season was a product of the juiced ball, but if you haven’t read Grey’s December sleeper post on Torres, check it out!

Did I rank your favorite player too low? Did I totally miss ranking your favorite up-and-coming sleeper? Let me know in the comments.

That’s it for this week!

Just a question. Everyone talks about Jazz Chisholm’s swing and miss stuff (I watch a lot of Marlins games and I think it’s a tad overblown, he’s 23/24 and improving and is a dedicated athlete like none other) but nobody ever talks about Javier Baez’s’ swing and miss stuff, for instance. Is it bias because he’s a Marlin? I am just curious, but Jazz gets on base more has 30/30+ upside. Some have him ranked high and some don’t. I just think it’s because people hate the Fish. I’m bias because I’m a diehard Marlins fan, LOL. Grey probably gets annoyed because I throw Marlins specific questions in throughout the season (I’m joking he doesn’t care I’m sure, it’s not many), but I just like others opinions. I mean Baez always has a sub .300 OBP but everyone still ranks him in the upper echelon, which he is amazing, but I’m using him as a comparison. Jazz already had a HR and a SB in less than 3 ST games. What does he have to do to convince people. It’s kind of like DeMar DeRozan in Basketball. It took him 10 seasons to get respect lol.

Thanks for all your hard work!!! Can’t wait for Baseball to begin!!

Yes, Jazz is certainly a talented young player and has the tools and ability to put it all together soon. I ranked Baez higher than Jazz for now because he’s a veteran and we for the most part know what to expect of him. Jazz’s plate discipline in the second half of last year has some people thinking the league adjusted to him and perhaps he was pressing at the plate a bit due to a generally weaker Marlins lineup. I do think Jazz is a talented player and definitely can make adjustments. While we may not see him put it all together this season, I’m sure we will in 2023 or 2024. Thanks for reading!

If/when Story gets 2B eligibility, how high would he be ranked?