I’m Scar – the newest Razzball writer. I’m glad baseball is back and Spring Training is upon us! I figured I’d start things off by ranking shortstops. Next week I’ll do a preseason ranking of second basemen, and we’ll take things from there.

Fantasy baseball is kind of like chess strategy. There are 400 distinct positions after the first two moves in the game, 400 different ways you could go about constructing a winning fantasy roster, and a seemingly endless supply of quality middle infielders available to draft this season.

Let’s get to the ranking methodology since there are many different types of leagues out there: I am basing my rankings off of a Yahoo 6×6 roto league (Runs, Home Runs, RBI, Batting Average, OBP, and Stolen Bases), leaning towards re-draft style over dynasty/keeper leagues (for those who wonder why Bobby Witt Jr. isn’t higher on the list). Yahoo has the most generous position eligibility out there and I believe OBP is important when assessing players. Sabermetrics with a dose of anecdotal evidence have some influence on my rankings formula.

As with every list, there will be the elite players and at a certain point, there will inevitably be a group of players that don’t contribute to every category, so depending on roster construction and the natural progression of your draft/auction, you will have to assess what particular statistics you need to chase.

For example, if you have Fernando Tatis Jr. or Trea Turner, a player such as Adalberto Mondesi Jr. isn’t as helpful to you as it is for the manager that’s auto-drafted seven corner infielders already. I personally try to draft middle infielders who can steal some bases, so you’ll notice I’m slightly lower on players like Carlos Correa and Corey Seager compared to the industry consensus.

Now that’s out of the way let’s get to the rankings:

These guys are all going in the first round of drafts. They are assets in every roto category and my only regret is that I can’t draft them all. Fernando Tatis Jr. is my #1 overall player. A full slate of games could see FTJ break fantasy baseball with a 50/30 season. I’m not a doctor, but I’m confident an offseason of rest will help FTJ’s shoulder issues. If his shoulder issues continue to be problematic, you could do worse than 130 games of FTJ + a replacement level player. If you are a more conservative manager, Trea Turner is my next pick for #1 overall.  A 30/30 season while leading the league in runs and batting average is attainable.

I believe we’ll see Franco follow in the footsteps of Tatis Jr., Soto, and Acuña and avoid the dreaded sophomore slump. Some are worried the Rays may limit his stolen base opportunities (85th sprint speed percentile); however, the Rays let Randy Arozarena run with a relatively poor caught stealing rate (20 SB’s, 10 caught stealing). I look for Franco to have a permanent spot around the top of the Rays lineup. A batting line of 100/25/85/.290/20 should be considered a safe baseline considering his skills and elite plate discipline.

While it may be accurate to say Marcus Semien had a career year last year, I don’t believe the bottom is totally going to drop out for him this season. Sure, his supporting cast is a bit weaker, but perhaps the Rangers make more moves to add to their lineup. Below is a snip of Semien’s home runs from his Baseball Savant page for Globe Life Field and the rest of the AL West ballparks:

The pick that could win or lose you your league, is of course Adalberto Mondesi Jr. With Mondesi, you are either getting 30+ stolen bases or what seems like 3o trips to the IL. How lucky are you feeling?

With the amount of money the Mets are paying Lindor, he has to do better than his 2021 73/20/63/.230/10 line. Usually, players moving from smaller markets to New York take a year to settle in but unfortunately, it seems like CitiField is where player’s careers go to die. However, I believe Lindor is talented enough and will adjust to New York like many before him, bouncing back slightly to a 80/25/85/.265/15 line.

Baez is ranked a little lower because of his OBP drain but I believe he’s still a useful player and may be asked to manufacture more runs in an up-and-coming Tigers lineup.

By now, assuming you play in a 12 team league, you should already have your starting shortstop. This tier of players is for the most part good all-around players with the potential to move up the ranks later this year. Jake Cronenworth is batting 3rd as of now in a loaded Padres lineup. Sign me up for a 100/25/90/.270/5 line with a .340 OBP as well as added 1B and 2B eligibility.

Jazz Chisholm Jr. may one day be a top 50 asset and possesses the 20/20 skills we fantasy players love but I believe Jazz is in for some regression and some growing pains this year. Chisholm Jr.’s Baseball Savant page is ice cold but he is only 24 and should eventually improve his plate discipline. I’m sure there will be a 2024 Jazz Chisholm Jr. sleeper post out there in the future. 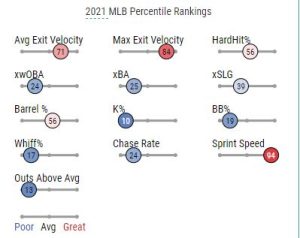 If you’ve blocked out everything fantasy baseball related during the lockout and you’re looking for a shortstop that can drastically outperform ADP, check out Grey’s “Willy Adames Sleeper” post in which great points are made.

I’m not high on Correa due to the fact that you can find many players with his skill set. His lengthy injury history, him being off a contract year, and him being a non-factor in stolen bases (only 33 in 3000+ career plate appearances) has Correa easily on my “do not draft list.”

A player to watch in this tier is Brendan Rodgers. If shortstop wasn’t so deep and if Bud Black wasn’t the Rockies manager, I would rank Rodgers higher. However, Rodgers should play every day. An interesting takeaway on Rodgers: He had an .873 road OPS last season with 15 homers and 51 RBI in 102 games. Mr. Prorater loves Brendan Rodgers!

How deep is shortstop that Brandon Crawford is ranked #23 on this list? Crawford’s 2021 season is backed up by solid barrel rates and plate discipline numbers but he is 35 and it’s likely we’ve seen the best of him already.

Well, that about wraps up this week’s shortstop rankings. Thanks for reading!

Seager is ranked by one writer on this site as the 25th overall KEEPER for 2022 and then the 18th best at his position alone by another. What on EARTH do I do with him?!

Well it is possible to have differences of opinion! My ranks are geared towards a redraft league as opposed to a keeper/dynasty, but if you’re thinking about keeping him, there’s a lot of factors to consider (salaries, amount of keepers/teams, the other players you are keeping, ect.).

Seager and Correa are better than this. Anyone who drafts Cronenworth, Adames, Swanson, and Urias over them deserves to finish middle of the pack. Get your speed elsewhere. This mentality has gotten out of hand.

I’m not saying Seager and Correa are terrible players, they are simply casualties of a deep shortstop group this year. I value Cronenworth, Adames, Swanson and Urias more because they contribute across the board and personally, their upside is higher. Correa has been on the injured list numerous times in years past. Other than a good year last year and excluding the shortened 2020 season, he had 15 homers with 65 RBI with a .239 average in 2018, and 21 homers with 59 RBI in 2019. Not very inspiring. I’ve mentioned I like to grab steals from my middle infield. You’re not going to get a lot of steals from a corner infielder unless you draft Jose Ramirez, and as a whole, steals have been on the decline, so it’s a matter of context and roster construction. Thanks for reading.

I can only keep 10—–NL only. VERY DEEP because after 23 starters we have 15 reserves. 11 teams & 10 KEEPERs/year.( $260auction cap). SO OBVIOUS HIGH INFLATION.
-Minor players stay @ salary till activated while all others get a $5 yearly raise until the owner feels they are no longer worth keeping.
BIG POINT IS IF minors are KEPT THE SALARY DOES NOT COUNT TWOARDS THE 260 total allowed in the auction!

Which 10 to keep or SHOULD I trade say Winker and say Greene for a $32 Scherzer?

I think Itch may be better suited for this question but I would keep your top listed six.
Suarez will be valuable, the visa issue shouldn’t delay him too long.
With regards to your minors, Greene is battling for a rotation spot this spring so I would keep him. I’m not too confident Gore will live up to his potential, and Cavalli and Matos seem like more of 2023/24 plays.
Regarding your trade question – I would need to know more, are you rebuilding or contending this year? If you are out of contention, I would hold Winker & Greene.

Unreal the timing with the news on Tatis, ugh. Rudy said it dropped Tatis to about 155 in the rankings. Why do injuries have to happen?

Wow what a drop! I guess that’s assuming he’s out 3 months or longer. Ugh injuries suck.

Give CJ Abrams a shot

I think that’ll depend on how well he does in spring training.

Unfortunately not! Hope you didn’t draft yet.

When do you target Tatis in a redraft now?

If Tatis is back in early to mid-May, I would take Tatis 50-75 overall assuming he falls that far.

Ah the days of Tatis being healthy…

Will
Reply to  Grey

No kidding. Blockbuster news on FTJ this morning.

Wonder what AJ Preller is going to pull off? Trevor Story is still out there.

Scar
Reply to  Will

Rumors are Hosmer and Myers are on the block, I’m sure Preller isn’t done and has a big move left in him, especially if Freeman signs with the Dodgers.

Will
Reply to  Scar

Last edited 4 months ago by Will
0

Scar
Reply to  Will

I agree – it’s gonna come down to how much of the contract the Padres are willing to eat. Preller can definitely be creative.

Ah we can’t have nice things!