Greetings and welcome back to the Mike Maher Hurricane Irma Shelter. My apologies for taking last week off, but it seems like I got out of South Florida just in time. I am now safely in the Pocono Mountains, where hurricanes dare not stray. Blizzards, on the other hand…

Hopefully, you all survived a week without me, especially as rosters expanded and probable pitcher lists were thrown further into confusion. This is the time of the year where it really gets dicey. We are all either in the home stretch or are in the playoffs in H2H leagues, while daily lineups and probable pitchers are more unpredictable than ever. Aces and top hitters for teams with guaranteed roster spots are getting extra rest now that each team has roughly 115 players available for each game. It’s not just Dusty Baker and Dave Roberts making our lives difficult anymore. Now, it’s all managers.

These two-start starters lists, regardless of where you look each week, are never going to be 100% accurate. Too much can change throughout the week and even over the weekend. These are just projections based on recent history and how the schedules line up. This week, multiply that by about a gajillion. If expanding rosters (and bullpens) weren’t enough to throw things off, Hurricane Irma and her friends are making sure to take care of the rest.

This week more than ever, you will need to double and triple check these starters on Sunday night and Monday morning. Some are all but guaranteed to change between now and then. Now, for the value picks from Streamonator this week:

The wild card here is Garrett Richards, who has a $14.20 value and just a 7% ownership in RCLs. BUT, he is only one start removed from a lengthy stint on the disabled list, and he only went 3 1/3 innings on a tight pitch count. While he will likely have a longer leash in these two starts, he will probably still be on a pitch count and may still be shaking off some rust as he gets healthy. Streamonator likes him this week, but I am a bit more hesitant. He seems like a guy to stay away from if you have a nice lead and want to be more conservative and a guy you want to roll the dice on if you are trying to catch someone and need to take some chances.

I am staying away from Pivetta even in deeper leagues, despite his positive dollar value and 100% availability. The start against Oakland is not enticing enough for me (especially since they have been hot at the dish the last two weeks) to roll the dice on his inconsistency and a start against the Marlins in Philadelphia.

Rodriguez also gets an Oakland start and is a worthwhile gamble this week, while Walker gets a San Francisco start but also a Colorado start, though the latter is in Arizona. I like both more than Sabathia and his starts against Tampa Bay and Baltimore. Now, to the charts! 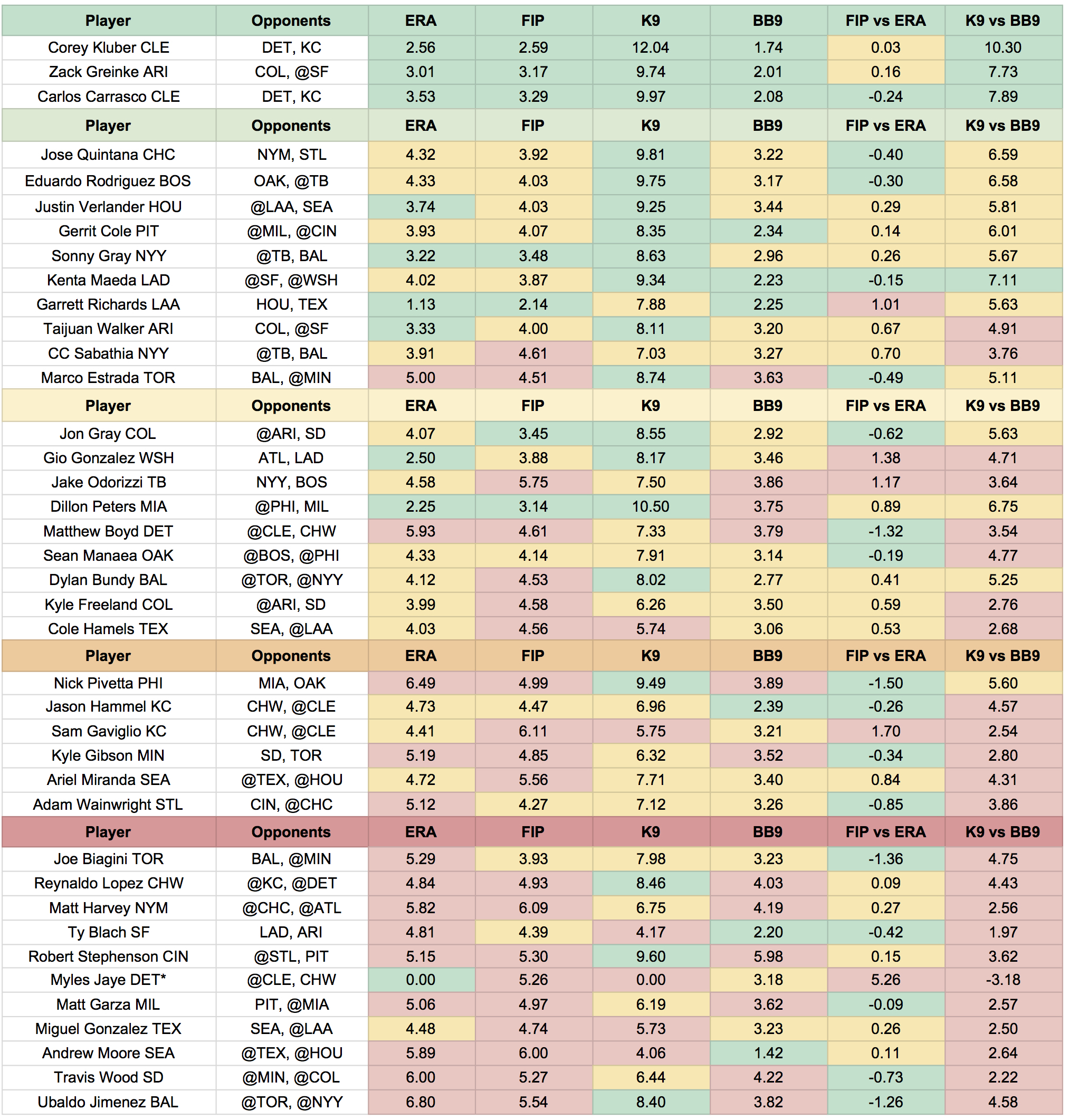 I’m too far behind in ERA and QS but neck and neck in Ks and WHIP. With that in mind, who would you grab for 2 starts from CC, Estrada, Odorizzi, Peters, Manaea, or pretty much anybody in the Knockoffs or Poop tiers? Also considering Clevinger or Glasnow for 1 start but think 2 starts from anybody above will give more Ks.

What about Jack Flaherty? Would he be a bad bet with CIN at home and then at Wrigley on Sunday (when the Cubs might rest some studs?)

Hey Mike! I appreciate you!

If I can only pick 4 of these 5 guys for their first start only, who’s out?

For what it’s worth, its H2H and wins are overvalued in this league.

I like to put starters in at my RP position. Right now, my “SP, RP” eligible pitchers are Jhoulys Chacin @ COL, Ivan Nova @ CIN & Clayton Richard @ COL. Nova’s been brutal lately, you still recommend him over C. Richard this week (Semi-Finals)? Or any other “SP/RP” sleepers on your radar this week?

Nova hasn’t been great, but I don’t know if I have the cahones to start Richards @ COL in the semi-finals after just one abbreviated start. What about Woodruff?

Thank you for putting this together. Cbssports.com has Gerrit Cole starting just once @ MIL on 9/12. Did the Pirates switch up the rotation or something? I thought Cole was going on 9/11.

No problem. Thanks for reading. The Pirates just said the other day they weren’t messing with Cole’s schedule even with Glasnow and Brault on the roster, but now it looks like he is going on 9/12 and not 9/11 anymore.

As far as next week goes, would you rather grab a 2 start R.Lopez or go with a somewhat safer Snell vs NYY, Glasnow @MLW or Fister vs OAK. They all have a certain degree of terrifying.

Agreed, none of those guys are great. I would go Fister or Glasnow and pray.

Hey Mike, I lost Jimmy Nelson this week, and my only replacements are Josh Hader or Ivan Nova. For now I’m going Hader, but who would you prioritize as a waiver replacement for him, assuming I’ll be keeping whoever I claim for the rest of the year? Even though ratios are important, wins are coming down to the wire for me to stay in first place.

I was leaning Bauer with the hot streak he has been on, but Richards intrigues me, especially with 2 starts.

Bauer was my initial reaction, and he is someone I have been leaning on lately. I had been streaming him a bunch in the second half and now just ended up holding onto him. Richards intrigues me but also scares me a little.

Hey there! So for me K and W are the only cats that matter (for H2H purposes, ERA and WHIP already a lost cause in my 2-week matchup). Would you still rank these guys the same way, including likelihood to actually get the 2 starts? Thanks so much!

Yeah. Might be willing to roll dice on Richards, but pitch counts would concern me when you need Ks

Ok, seriously, this needs to stop. Kluber is not making 2 starts this week. Its not worth scrolling through the rest of your list when you can’t even get the top guys right. Week after week with this nonsense.

Grey, Rudy…. can we, your loyal readers, at least get a writer who researches the actual 2 start pitchers?

@Fogimon: Have the Indians moved to a six man rotation? I think he does get 2 starts this week with Salazar heading to the pen.

Why wouldn’t he get two starts? He is projected to start Tuesday and Sunday. Salazar is in the bullpen now.

List hadn’t been adjusted for the Jimmy Nelson news yet, but yeah looks like Monday/Saturday for him. He has looked good in a small sample size, and I would probably rather roll with him over Sabathia or Estrada.

Mike, thanks for the hard work (glad to hear you safe),

10-my H2H cat keeper (keep 12) balanced stats, we get 3 moves per week max, but I only have 5 moves left all year.
I’ve got 2 guys that need to come off the DL (Wood and Richards) so I need to drop 2 to bring them on (even tho Richards might be the second drop). I Assume my drops are Richards and Betances? If so, and Paxton is back next week, whose my third drop? It’s a good problem to have but a problem nonetheless

Thanks, Marv. Looks like Nelson since he was just ruled out for the year.