We have a bit of a light lineup this week due to some off days on Monday and Thursday, so Week 19 will be more of a challenge to find value among the Two-Start Starters. It sounds like Max Scherzer is going to be healthy enough to go and make his two starts, but that only helps out Scherzer owners and not the rest of us who are looking for some available value.

Even Streamonator is down on Week 19, as there weren’t any available starters owned in less than 75% of RCLs with a positive dollar value. There is one possible exception to that statement*, but we’re not going to let statistically-based advice from Streamonator stop us from rolling the dice this week, right?

There are, however, a few starters in our Replicas that I would roll with this week who might be available in your leagues. It will likely be harder to grab at least two of these starters in an RCL where waivers and ownership are a bit more savage, but all three are owned in less than 75% of ESPN leagues.

I have been rolling with Godley since April in a few leagues, so I was really surprised to check his ownership in ESPN leagues and see that it is actually below 65%. He is owned in 93% of RCLs, though, so if you have any members of Razznation in your league then you are probably out of luck. As you can see from his numbers in the chart below, Godley has been solid all year.

Obviously, the thing that scares you about Godley this week is his matchups against the Dodgers and Cubs. The Dodgers are arguably the best team in baseball and have the 7th best team wOBA over the last two weeks, while the Cubs have been much better in the second half of the season and are 10th in wOBA over the last two weeks. He does not have any softball matchups, which works against his value.

BUT both starts are at home, where Godley has held opposing teams to a .226 wOBA and .140 / .257 / .232 slash line this season. So, while he has two tough matchups, you could do much worse than rolling the dice on two Godley starts this week if he is indeed available in your league.

Wacha is enjoying a nice bounce-back season in 2017 after a pretty dreadful 2016. He hit some bumps in the road earlier in the season, with a 5.40 ERA in May and 5.55 ERA in June. But check out that 1.93 ERA in July. He has one nice matchup against the Braves at home but a not great but not necessarily terrible matchup against the Royals on the road.

Wacha’s Home/Away splits are pretty severe: 2.67 ERA at home, 5.19 ERA on the road. So, that makes his road matchup against a Royals team that has been playing much better lately a little bit more concerning. Streamonator likes him for a $9 value at home against the Braves but a -$8.20 on the road against the Royals. He is owned in 95% of RCLs but just 70% of ESPN leagues, and I like the Braves matchup enough to roll the dice on the Royals matchup.

As it stands now, the pitcher Wacha would face in that Royals matchup is Trevor Cahill. Cahill has not been great since joining the Royals but does have two good matchups this week against the Cardinals and White Sox, both of whom are in the bottom eight in baseball in team wOBA over the last two weeks and has a K/9 of almost 10 this season. Unlike Godley and Wacha, Cahill should be available in most leagues. He is owned in just 21% of ESPN leagues and 32% of RCLs. 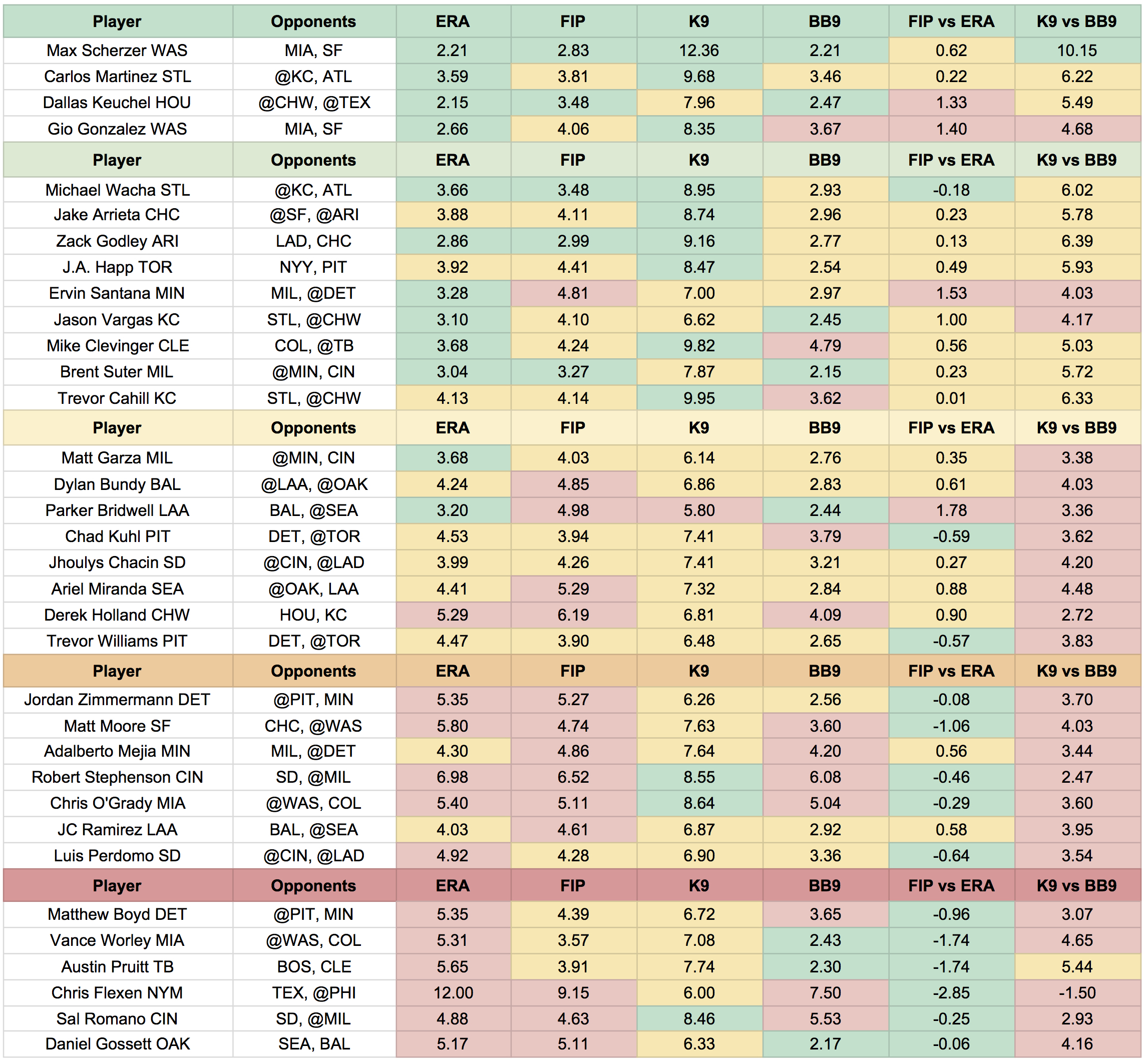 Yr Never Too Old for Balloons

those godley numbers right there tell how often owners in those leagues go absentee. RCL’s are best (and well known) won by the old own 3 SP stream other starts, have many RP. other standards leagues probably have even more SP owned, and they have THAT much less ownership %’s. yeah, absentee owners, possibly averaging 5 per league or more.

Related: for 1-start pitchers, how would you rank Berrios/Walker/Faria (home v. CLE/Salazar) this week?

@Re-Pete: Baseball Press is listing Cahill as the Wednesday starter – so he’s not getting a 2nd start?? I assume that pushes him behind the three listed above as a 1-start guy, right?

Great analysis, SON hates Garza’s matchups – think he has an edge? I need a solid 2-starter who won’t kill my ratios. Thanks.

I like both of his matchups. Two teams that have been really struggling on the offensive side lately.

I’m in a H2H league and I’m tied at 5 going into today. I’ve got a slight lead in ERA and WHIP. My opponent has archer and jimmy nelson facing each other today. You think I should take a risk and grab a streamer, or bank on the fact archer and Nelson would most likely give up runs and bloat the opposing ERA and WHIP? I’m inclined to not pick up anyone. Looking for a second opinion.

I have to make a decision like this in my H2H at least twice a month it seems. Unless Ryu or Corbin are available in your league I would probably stay put.

@mikeMaher: didn’t know how good ryu has been. Just picked him up incase I need him.

I have as my last two starters Berrios (@DET -6.7) and Samardzjia (@WSH -13.5) and only one bench spot. I don’t mind dumping the Shark but not Berrios. Berrios is either on the bench or starting.

Normally I would avert my eyes and find someone less likely to blow up my peripherals but seeing Kuhl and Holland on your list I had to ask. Why?

Reports out of CLE have Clevinger working out of the bullpen until later next week.

Yeah. Sounds like a temporary move because of postponements and off days, so they’re going with a 4 man in the short term.

Some sites have Kluber making 2 starts. Is CLE employkng a 6 man roatiin next week, or will Klubes go on regular rest Tues and Sun?

Yeah, looks like Kluber is in and Clevinger is out for two starts.