Please see our player page for Jeff Mathis to see projections for today, the next 7 days and rest of season as well as stats and gamelogs designed with the fantasy baseball player in mind.

With the likelihood of a shortened MLB season growing by the day streaming and targeting matchups will be more important in our 2020 fantasy world than ever before. One of the best places to take a stab at that is using catcher defense to try and mine some stolen bases. Two things factor into this: how often a catcher is run on and how often they throw runners out. Ideally, you’re getting a good matchup on both sides, like finding toilet paper at the grocery store that’s also not sandpaper texture, but I’d prefer volume to efficiency. Here are the 2019 stats and some of the likely hot spots.

After going over the top 10 for 2018 fantasy baseball and the top 20 for 2018 fantasy baseball (clickbait!), it’s now time to turn our lonely eyes to you, Mr. Robinson Chirinos.  To paraphrase The Refreshments from their should-be smash hit, Fonder and Blonder, “Who said absence makes the heart grow fonder.  Pitches are thrown to catchers, but that doesn’t make my heart grow fonder.”  Later in that song, they sing, “I’ll be scratchin’ it down,” which sounds like it applies to all baseball players.  Or as the rhyming dictionary has never said, applies to oranges.  Any hoo!  The projections noted in the post are my own, and I mention where tiers start and stop.  I also mention a bunch of hullabaloo, so let’s get to it.  Anyway, here’s the top 20 catchers for 2018 fantasy baseball:

I’m not a woman.
I’m not a man.
I am something that you refer to as Fantasy Master Lothario.
I’ll never beat you (except in fantasy, that is my pledge).
I’ll never lie (except about how much I once liked Josh Rutledge).
And you’re evil but unless Rougned Odor disappoints I’ll forgive you!
Cause baseball will start 4 2!

*takes a long inhale* Can you smell the freshly cut grass?  No, because it’s still freezing in half the country?  Where’s your climate change now, Al Gore?!  I’m so hyped up about Opening Day, I’m slangin’ bean pies like Ice Cube and picking up and dropping catchers for s’s and g’s!  *goes to my Yahoo fantasy team page*

What would #OpeningDay be without a Yahoo Fantasy sports glitch? My Yahoo teams are like the opening moments of The Leftovers. pic.twitter.com/OeQV1lysno

All right, so I guess I’m not making changes to my Yahoo team on this glorious of splendiferous days.  This day that is more beautiful than Giancarlo’s tukis.  This day that is the most frou-frou of all catchpennies!  Okay, I think my thesaurus steered me wrong on that last one.  On a sappy level, this was a weird offseason, and I’m glad to put the real world in my rearview mirror for six glorious months, and worry about nothing but winning as many fantasy baseball leagues as I can, and helping everyone along the way.  Now who was it again that had Greg Bird (0-for-4, but batted third; yes, you should own him) ranked higher than everyone else?!  Anyway, here’s what else I saw yesterday in fantasy baseball:

Welcome to the 2016 Razzball Team Previews! You’ll find everything you need to know about each team to get yourself ready for the upcoming fantasy baseball season. And I mean everything, folks. We’ve got line-ups, charts, Slurpees, lube, a guide for beginner electricians, and even a cactus! Well, that’s a lie. That’s what Jay had last year sitting in front of him. This year? Um…a little less lube? Take that as you will. But hey, we’ve got teams to preview and questions to ask, so let’s hop to it. We a very special guest for this post…Scott Gelman, to provide his take on what the team has in store this season. Now enough rambling, let’s see what 2016 holds for the Miami Marlins!

I’ll be honest, picking a creeper early in the year is not an easy task. We have small sample sizes to work with, players under performing and pitchers very hard to predict. I ask myself every week as I prepare these: what angle can I find to make a call? What is a constant that doesn’t change? Where are my pants? Well, the third question is nearly impossible to answer because it’s like trying to figure out where Jimmy Hoffa is buried. The other two are things we always look for, regardless of what point of the season we are at, are park factors, lefty/righty match-ups, Schmotatoness, and batter vs. pitcher history. For example, this week, Brad Miller plays six games and for five of them, he faces right-handers. On the year, he bats .348 against RHP (good thing), but among the five he faces this week, he bats .191 against (not so good), and Hitter-Tron (-$2.5) says he won’t be any good. I’ll pass too. That’s a little snapshot into my process.  This week, I’m going for Schomtatoness and park factors to make my call. Would you like to hear more? Oh c’mon, I’ll give you some Arby’s coupons? Dairy Queen? Fine, then skip to the top 100 and we can fight about that in the comments instead.

I know, I know.  Terrible title pun and Vance Worley isn’t exactly the most exciting Pitcher Profile.  CALL UP ANDREW HEANEY ALREADY!  Just needed to get that out of my system…

I thought about a Danny Duffy.  Maybe Daisuke Matsuzaka. Mostly because that would be an inning-long Pitcher Profile and I could play more Call of Duty.  He shoulda laid off the Steak “n Shake!  Over/under on amount of times you see that joke today…

But back to Worley.  I think it’s easily forgotten just how good a run he had for the 2011 Phillies.  3.01 ERA?  119 Ks in 131.2 IP?  11 Wins?  Really surprising looking back on those… Then he was terrible in his follow-up with the Phils, followed by getting absolutely crushed in 10 starts for the Twins last year.  Starting 2014 in AAA, Worley was meh in 7 starts with a 4.30 ERA, but an encouraging 43 Ks in 46 innings.  Which nobody would ever care about, except he had as good a debut anyone could’ve expected yesterday at Miami.  And actually – and I didn’t even think to look until the broadcast showed his Minors numbers – 43:4 K:BB in AAA.  Wowzer!  So I decided to take a look at the spectacled SP and if there’s anything there for you to care about in your fantasy leagues:

I know, I know.  I promised everyone Dallas Keuchel, but he’s pitching tonight!  His last start was so long ago that Jose Abreu still seemed like a good guy to trade for if someone wasn’t selling too high (ack!).  So long ago that Jay Z seemed to still love his little sister-in-law!

But do not fret, I promise unless there’s a Noah-type monsoon that floods out four games, that Keuchel will be next week on his weekend start.

So in my despair when I saw Keuchel was tonight and not yesterday, I went to Twitter for some ideas and got a great one for Ryan Vogelsong.  I gotta admit – I love Vogelsong.  Helped carry me to titles in both 2011 and 2012 where he stayed undervalued for an entire 2-year stretch.  Pretty hard to do.  But 2013 was a disaster with hitters bashing him at a .299 clip, suffered a 5.73 ERA, and I guess the more appropriate adjective use of “suffer” would be for his broken hand on a comebacker.  It was in a 5-inning scoreless game too!  Talk about the worst timing, right whence he was turning it around.

In 2012, everyone ignored Vogelsong because he started the year on the DL and I think he missed all of one start.  Noobs!  To ignore him (like I obviously did) based on a terrible 2013 for a 36-year-old pitcher I think is more logical.  But he’s got his velocity back up to 2012 levels, dropped the line drive rate, and has four gems in his last five starts.  Indeed, it felt only logical to break down his start yesterday against the Marlins, and if he can indeed make another under-the-radar lasting impact on fantasy teams in 2014:

Maybe it’s the rush of the holiday season with two kids or the fact that some major cash is flowing in free agency, but I feel like this year’s offseason is just whizzing by. This will be the last sort of “stat review” for SAGNOF before I head into the territory of value plays for steals in 2014. This post will lay out some of the best and worst catchers in terms of their caught stealing percentages (CS%). Keep in mind that pitchers have a lot to do with holding baserunners as well, and you can find my previous post on the best and worst pitchers against the stolen base here at Razzball. A quick note on the catcher tables – I sorted them by qualified and non-qualified catchers. “Qualified” catchers played more than 1/2 of their team’s games, while “non-qualified” catchers played less than that. Catchers who split times between two teams, like Kurt Suzuki, also end up on the “non-qualified” list. The league average caught stealing percentage in 2013 was 28%, and that hasn’t really changed much over the last 3 years (27% in 2012, 28% in 2011). Last but not least, consider that playing time situations can fluctuate with free agent signings and trades, creating new opportunities for previously non-qualified catchers as the offseason transactions continue. Green columns indicate guys that are easy to run against, and red columns designate the toughest to run against: 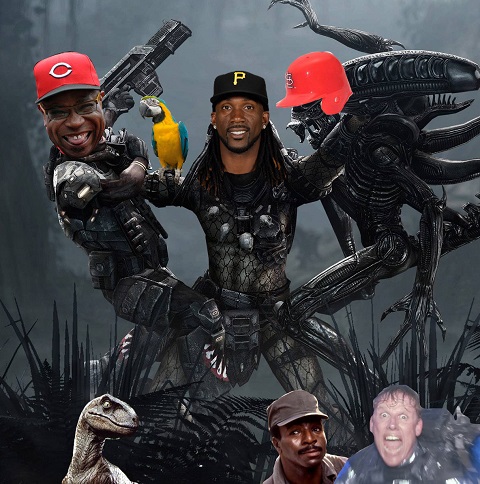 The McC went 1-for-2 last night with a run. Not really numbers deserving of the lede, but since I only get to do this once a week, I do what I want. And plus, I had already done my photoshop before the game ended. So there’s that. Truth be told, I really have nothing else to say about Andrew McCutchen. It is a very fine season. You know that. I know that. Sky… may not know that. He’s busy helping out all you folks that don’t have a Fantasy Baseball team in the running over at RazzFoot. That’s what I’m calling our Fantasy Football site. Because 20 years ago, I loved the Ninja Turtles. You know, the Foot Clan? RazzFoot? NINJA VANISH! Eh. Whatever. The McCutch is having a great year. He’s having a great Fantasy Baseball year. To hate him is to hate kittens. To love him is to not spell it McCutcheon. Start spreading the word. Here’s what else I noticed yesterday: