A lot of pitcher fantasy analysis centers around pitcher quality: Velocity, stuff, BABIP, Statcast, recent performance…balancing out all of the available metrics to determine cost (draft slot, $ value) is the name of the game. Today we’re going to look at a metric I rarely see discussed in the pre-season: strength of schedule (SoS).

In-season, starting pitcher matchups are gold, whether you’re playing the streaming game or DFS. But pre-season, I rarely see analysis go any deeper than AL-vs.-NL comparisons. At the individual-SP level, this makes sense: projecting out specific full-season matchups for an SP is impossible.

At the team level, however, we can get get a pretty good handle on who may have advantageous matchups and who has a tough road. More specifically, we’re interested in the extremes: How frequently will each team face really tough matchups, or really easy ones? The middle 60% will be mostly based on pitcher quality; at the margins, we have actionable start/sit decisions.

This whole analysis is caveated by “projections aren’t perfect”. However on the margins, we can get a sense for witch teams are likely to be avoids (top 20%) and which are likely to be streamable situations (bottom 20%).

If you didn’t already skip to the chart, it’s now time (click to embiggen): 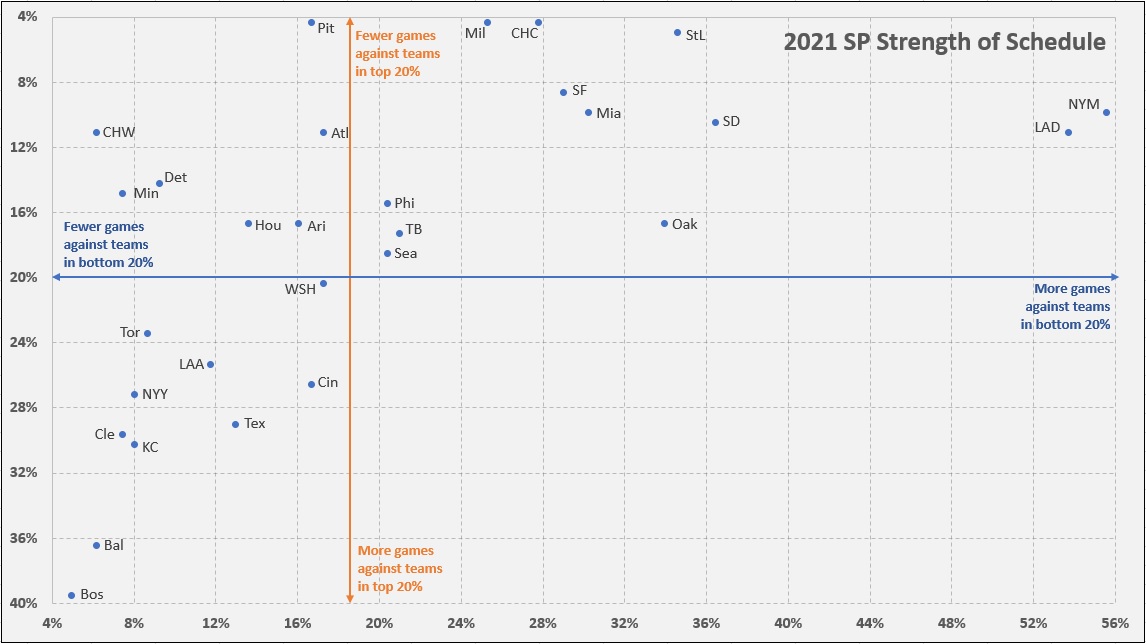 You want to be further to the right (more starts to target against the worst 20% of the league), and further towards the top (fewer starts against the toughest 20%).

First of all: this is not a list of targets/fades to outperform their season-long projections. Any projection system worth it’s salt already includes some element of opponent quality, and we don’t want to double-count opponent strength.

So how should you use this info?

For your SP1/SP2, you won’t be swapping them in/out of the lineup based on matchup; if you start them 100% of the time, you’ll get their full-season projections. You should ignore this for top SP.

On the flipside, your SP 6/7/8/etc. are likely to be streaming spots, daily if available, or weekly targeting great matchups/2 starts. You SHOULD NOT be holding those guys full-season. Ignore full-season SoS for players you don’t plan to hold all season. You’ll have much better information in-season on specific matchups to target.

If you’re doing the math, we’re left with SP 3/4/5 (adjust to suit your league) – those SP you’re hoping to hold all year, but need to start/sit based on matchups. You already know you’ll be swapping these guys into your lineup when facing a poor opponent, and benching when facing a tough one. This chart tells you which teams are projected to face more/less of each category.

Let’s get to a few more specific teams and names. First, the upper-right quadrant: mid-rotation arms to target:

Who are the teams & SP likely lining up for a much tougher schedule this year?

To summarize: outside of the set-it-and-forget-it top-tier pitchers, you want to draft SPs on teams who are projected to face soft schedules. Don’t just focus on talent; you need to maximize the usable spots these pitchers will be facing.