We already went over the top 20 catchers and the top 20 1st basemen for 2021 fantasy baseball. Today, we dip our big toe into the top 20 2nd basemen pool. Also, for the 2nd time in two positions, I ranked and projected every player in the top 20. Glorious be me, but also that means there were very few guys to come out of nowhere this year. Through three recapped positions, it’s only been Eric Haase. More like HAHAHAHAHaase. To recap this crap (rhyme points!), this final ranking for last year is from our Fantasy Baseball Player Rater with my comments. The Player Rater allows me to be impartial while looking at how I ranked them in the preseason.  Anyway, here’s the top 20 2nd basemen for 2021 fantasy baseball and how they compared to where I originally ranked them:

2. Marcus Semien – Few guys were more frustrating than Semien. All those years of holding him and loving him, then just as Semien’s about to explode, I’m sputtering with nothing. Semien was definitely in the right color uniform. The blue is not for the Jays, though. It’s for the blue Nicki Minaj Trinidadian cousin’s friend in my shorts! What an absolutely glorious season for Marcus. Gotta love those career years when a guy turns 31 years old. Career high in power, speed, RBIs and SLG. Coming off a 7/4/.223 season and he did that roughly every month plus way more average. This was the year to roster Semien, and I’d be shocked if he ever comes close to any of this again, after he signs for an invariably insane contract to play for the Mets or Yanks. Preseason Rank #12 for shortstops, 2021 Projections: 88/26/71/.249/12 in 573 ABs, Final Numbers: 115/45/102/.265/15 in 652 ABs

4. Whit Merrifield – Will say this about the Royals, they did a few contracts I wouldn’t have done and they got plenty back in return. I would’ve let Merrifield walk years ago, and, at 32, he had one of his best years. It’s a blind spot of mine to overestimate how quickly guys will age. Hey, at least I can see my blind spot! Imagine “aging” is a kiddie song, and aging players are sitting in a circle and I have to sit in a player’s lap before the music stops and I’m always stuck sitting in the guy’s lap who sucks…is this analogy making any sense and why am I sitting on Mike Moustakas’s lap? Something I have realized, just as many guys like Gavin Lux (young) fail to provide value as old guys (Mostsuckass). Now it’s putting that into practice. Preseason Rank #3, 2021 Projections: 102/12/62/.284/22 in 613 ABs, Final Numbers: 97/10/74/.277/40 in 664 ABs

5. Jorge Polanco – This was the best profit vs. draft price, right? Maybe Semien, since he ended up higher, even if his price was much higher. I had Polanco on teams, and I can say with a straight face, it didn’t feel that amazing. Maybe because the teams where I had him had bigger issues, and couldn’t just bask in Polanco’s value. The pretty cool thing about Polanco is he seems to give the impression this is not repeatable, but it looks close to doable again. Trying to focus the recap on this year vs. next, but yeah, Polanco looks to have become something. Preseason Rank #19 for shortstops, 2021 Projections: 83/23/74/.272/8 in 572 ABs, Final Numbers: 97/33/98/.269/11 in 588 ABs

8. Javier Baez – His Statcast numbers are like “Build-A-Player”-type numbers if you just wanted a guy who’s good in fantasy. 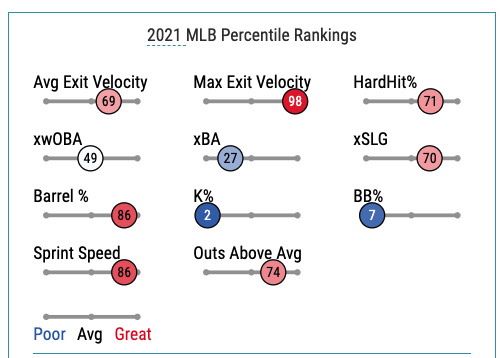 10. Tommy Edman – This is funny (possibly only to me). I had Polanco, as mentioned above, and Edman on multiple teams, and I enjoyed Edman more, mostly because I was able to move him all around my lineup. His eligibility allowed me to cover for so many different guys and this helped make him more valuable in my eyes. It’s worth pointing out position eligibility doesn’t itself make for a great experience. Member Cavan Biggio? In March, “Biggio will hit leadoff and Semien 9th.” Those people misread the situation in possibly the worst of ways. Preseason Rank #11, 2021 Projections: 88/15/61/.262/19 in 581 ABs, Final Numbers: 91/11/56/.262/30 in 641 ABs

13. Jonathan Schoop – Already went over him in the recap of the top 20 1st basemen.

14. Ryan McMahon – Already went over him in the recap of the top 20 1st basemen.

15. Jake Cronenworth – Already went over him in the recap of the top 20 1st basemen.

So one thing about Altuve… we know he changed his stance etc to sellout for power its clear when watch film compared to past, and has been working pretty well for him as he still maintained a .278 this season with a reasonable .280 BABIP and a pretty normal 15% HR/FB… the thing that gets my attention though, is his 77% O-contact rate… i mean, he’s been pretty good at it in the past, but that is easily his best rate since 2016. and when you are pulling 54% of contact, something’s gotta give sooner or later. I’d be shocked if he continues the same approach and that doesn’t drop close to 10% next year and him trading roughly 2% BB for 2% Ks.

You said that was a decent?

Also,
I have the #2 and #3 pick in my minor league draft that is coming up after the WS. Would you rather have Leiter or Jobe assuming they are both available for me

i think Leiter is going to be taken at 1

Which you don’t have?

So, I guess Jobe, you only gave me two options

Totally with you on the India call – I have seen early mock drafts on some sites where he’s not even taken by round 10! How people aren’t excited about a guy who just put up 21/12 with a great OBP in his rookie season is beyond me.

Are you suggesting not all Reds highly rated prospects will follow in the steps of Senzel and Hamilton?

Haha, too early to say!

Without digging into the free agent pool, do you think Luis Urias is worth a 3yr $10 contract extension in a 6×6 auction – $260 budget 26 player roster.

My inkling is no, but he improved in important peripheral categories substantially this year

How many teams in the league?

yeah 12 mixed…. $10 seemed too rich for me, thanks for confirming my inkling!

I know you know but it has to get stated… Turner didn’t get 2b until he was traded. Only the last 1/3 of his stats count toward 2b. Gotta think the industry will rank him the same as they always do (5-10 range) despite him nearly always finishing in the top 5. He’s so consistent!

I bet Jazz moves up to top 10 on a per game basis. He’s a Baez like wild card… If that’s his upside though, yum!

Nicky Lopez‘s Babip was high (.347) but his K/BB rates improved. Do you think his speed can prop up a higher BA? .285+? Any chance for more SB? Seems to have a great sprint speed and is on a good team for running. Feels like a great guy to pair with Vlad late.

Honestly, Trea Turner could be taken number one overall, and it wouldn’t be a reach…I think I want Tatis, but Trea’s in the convo

Lopez seems fine for late SBs, maybe a .270+ AVG, which gives the chance for runs, but there’s essentially zeros from HRs and RBIs

Will Tatis have the ‘health concern’ albatross for a #1 overall now? That’s gotta be the only thing preventing him from #1, right?

Other possibilities:
Vlad? No SB, but think his bat…
Soto? Second half = sweet sassy molassy! How is he only 22?
Acuna? Tildaddy says you can do some wind sprints and burpees to limber up the nethers…
Boba? Sweet, exclamation, do it again! Top 10 though. Still not sure how this team missed the playoffs!
Trout? What’s his deal?
Harper? If FTJ is dinged for health, then Harper has to be too? And his year/year ups and downs…
The rest of the t

Jazz is a no brainer there. Jazz Savant percentile pic is pretty close to Baez (with faster sprint and higher EV).

Edman is white bread boring! Yeah, you can make an over-easy egg, but the egg is the star. Yeah, you can make a solid sammich, but wouldn’t you rather have a little something else than white? He’s still lumped in the ‘well if he’s there and I have a need for speed’ category for me. I assume I’ll be passing on him for an SP or something at that point in the draft. Maybe that’s on me though.

Tatis did what he just did with the injury concerns, so gotta ignore it I think — Acuna is just as much an injury concern, he’s the only one in consideration…If it’s late-March, and Acuna’s back already, I could see taking him 1st overall… Trea’s in consideration, but his upside isn’t Tatis or Acuna with their floors

Agreed. That’s the only way anyone can ding what Tatis just did. You’re right, it would be hard to pass on Tatis with #1.

It’ll be hard to pass on Vlad too though… Or Soto… If only all of our troubles were such luxuries!

Ozzie Albies – How much better can his stats get? He’s only 24, has made some consistent improvements. His hardhit% is in the 29% percentile and he still ran into 30 HRs. This could naturally improve as he gets into the sweet spot of his career/age. On the flipside, if he goes much more down the LA revolution then he’s a pop-up machine.

Kinda feel like Tatis, Acuna, Trea isn’t overthinking things, if everyone is healthy — health is an issue tho

Oh, Albies is gonna be great for another six years at least…He’s a 30/20 guy without much effort…Think he’s prolly in the top 15 overall, maybe top 10

What do you think the upside is on Urias next year? Still only 24 and a former top 20 overall prospect.

I like Urias, could see a 30/10 season from him…Steals might be the hardest thing for him to do there too, power’s fairly legit

Will struggle for average a bit

When I was going through the year end stats on my own, Jorge Polanco’s numbers shocked me. I guess because he was owned all year and steady I didnt notice.

Under the radar for me for sure.

Yeah, completely! He was so crazy valuable in a valuable position too

Will
Reply to  Grey

Polanco had 9 home runs on June 30th. Then he hit 24 home runs after July 1st including 18 in August/Sept/Oct in 217 at bats. Totally out of the blue 2nd half power surge.

Grey
Author
Reply to  Will

Man some of the projections are scary close! Very impressive. You take away Angel Hernandez calling a few of Jazz’s games, those K’s turn to walks and your AB are identical!

So I found another 22’ mock draft from another site Friday. Man I hope it’s a sign for next year. One ‘pert’ took Liam Hendriks in round 2, and Salvy in round 3! In a 12 team league!

I know I keep bringing up next already, but I can’t help it! Thank you for always being there for us addicts!

Thanks! Ha, yeah, on Jazz

Liam in round 2 and Salvy in 3 sounds about right for some people — not me, but I could see it for people who believe in buying saves and catchers