Not a bad year for me with the 2021 catcher rankings in the broadest of terms. This year I only left one guy unranked who ended up in the top 20, and if anyone ranked Eric Haase in the top 20, then kudos to them for figuring out a reliable, gas-efficient time machine. That doesn’t mean my rankings are a chef’s kiss from Padma as I win the Quickfire. Oh, some of these are a hot mess from where I ranked them, compared to where they ended up. Please don’t ask if this is a ranking for next year. It’s not a ranking for next year. It’s me recapping last season. Please, for the love that all is holy, understand this. It’s all I ask of you. Well, that and shower me with praise. The latter isn’t hard, the former is. Also, remembering which is the ‘latter’ and which is the ‘former’ is hard too. Quibbles and semantics, my good man and five lady-mans. It wouldn’t be fair for me to preseason rank the players, then rank them again in the postseason based on my opinion, so these postseason top 20 lists are ranked according to our Fantasy Baseball Player Rater. It’s cold hard math, y’all! Anyway, here’s the top 20 catchers for 2021 fantasy baseball and how they compared to where I originally ranked them:

1. Salvador Perez – I almost fainted looking at his year. I’m sorry, his year, bros and four sisters and one sista — what even? Possibly the most incredible year-end number from any players not named Ohtani is Sal Perez played in 161 games and got 620 ABs. Do you know how rare that is? 161 games played from a catcher has happened three times in history. Joe Torre (1970), Ted Simmons (1973) and Perez. (In fairness to the other two, they did it without the DH.) Seriously, can we get a dubya tee eff for Ess Pee? Never in my wildest imaginations did I think a year like this was possible from Perez. Or any catcher. He also killed my least favorite narrative, so props to him. You know what narrative I mean. The one that goes: guys are better in their contract years. Perez just signed an absurd contract and had an absurd year. Maybe we can finally put that narrative to bed forever. Hopefully next year Perez will kill my other least favorite narrative of “drafting a catcher early is good because of position scarcity,” but he won’t. That narrative will outlive all of us. It’s so funny how people in the preseason are like, “Grey, your rugged features make me melt. Also, I’m drafting a catcher high because a great catcher makes such a huge difference, look at Sal P.” The thing they always forget is Perez wasn’t a catcher who was drafted high when he returned this value. Jerry Tomato was drafted high. Perez was available for anyone around 150th overall. The funniest thing (not haha) is how people are now talking about Perez for the Hall of Fame. How’s the Hall of Fame candidacy going for Javy Lopez? Finally, Sal Perez’s season will rank 10th of all-time for catchers, just in front of Mike Piazza’s 1995 season on the Historical Player Rater. Image to follow. Preseason Rank #2, 2021 Projections: 67/25/82/.246/1 in 519 ABs, Final Numbers: 88/48/121/.273/1 in 620 ABs 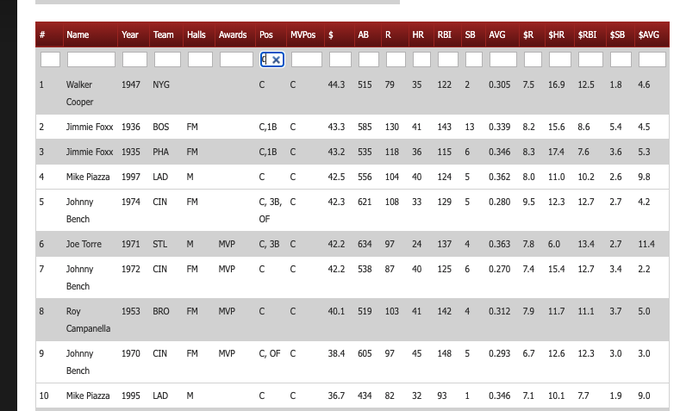 3. Will Smith – Take all the people in Wal-Mart, who are in motorized scooters, and line them up next to each other. That’s how much space there is between Sal Perez and Will Smith. Okay, that’s my last flabbergasted take on Perez. My ranking for Smith was third overall for catchers, before Dave Roberts said some nonsense in the spring about Austin Barnes being a 50/50 split with him, and I totally bit on that non-news. Preseason Rank #9, 2021 Projections: 57/16/57/.266/2 in 378 ABs, Final Numbers: 71/25/76/.258/3 in 414 ABs

5. Mike Zunino – There’s guys above here (obviously, dur), but this was the first guy who I had the opportunity to draft, since he was available after 220 overall in snake drafts. Well, Posey was available too, but, let’s be honest, I was never drafting him. One love for the Posey lovers, but I think he’s ass. Any hoo! Not only did I draft Zunino, but in shallower leagues, I drafted him, dropped him and picked him up again, rinse and repeat about fifteen times. Who’s Zunino’ing who? Me, about a dozen or so times throughout the year. Preseason Rank #18, 2021 Projections: 38/19/48/.196 in 374 ABs, Final Numbers: 64/33/62/.216 in 333 ABs

8. Eric Haase – “Hey, welcome back to Pawn Stars, before the break Big Haase was teaching Chumlee why the pawn store doesn’t carry any Nazi memorabilia while both are clearly on meth. Let’s get back to the show.” That’s me auditioning to be the History Channel’s Pawn Stars narrator. As for Eric “Big” Haase, when he came up, I said he had big-time power, and he showed it. When you can hit 35 homers and .210, you have the chance to be a difference maker at catcher. See Mike Zunino’s year. Preseason Unranked, Final Numbers: 48/22/61/.231/2 in 351 ABs

10. Tyler Stephenson – Wanna make this about this past year vs. future years, but Stephenson is about to become a full-time catcher, hitter in the top five spots in the order in a good park. We should all be thanking that *ucker Barnhart because he prospblocked Tyler Stephenson enough to tamp down his shine so he could be my ‘ticket to click it’ next year. Preseason Rank #38, 2021 Projections: 24/6/31/.278 in 178 ABs, Final Numbers: 56/10/45/.286 in 350 ABs

17. Daulton Varsho – Diamondbacks should be ashamed of themselves for how they handled Varsho this year. They had a full year to give Varsho the run in any position he wanted. Instead, they sent him down to start the year, then played games with his playing time when he was recalled. Like they needed to know what they had in David Peralta, Carson Kelly or about six other guys. Preseason Rank #25, 2021 Projections: 32/6/31/.277/9 in 281 ABs, Final Numbers: 41/11/38/.246/6 in 284 ABs

18. Luis Torrens – In the preseason, I wrote this, “I try to keep at least one reliable source about each team a DM away, and I reached out to a Mariners friend, and asked them if Torrens was the catcher, or Tom Murphy, and they felt Tom Murphy was the guy, and I sure hope I DM’d the right person.” And that’s me quoting me quoting my Mariners’ source! That source turned out to be right, but only on a technicality. Torrens was primarily used as a DH, while playing enough catcher to maintain eligibility. Preseason Rank #44, 2021 Projections: 31/8/32/.276 in 278 ABs, Final Numbers: 39/15/47/.243 in 346 ABs