The Major League Baseball 2020 season is a mess, and this is a post about it. As of Saturday night, 104 players and 24 staff/training members had tested positive for coronavirus since the inception of the season, with 42 cases identified in the last week. Boston Red Sox star and former Tier 3 member Eduardo Rodriguez has been shut down for the 2020 season following myocarditis that was associated with his bout of coronavirus. 20% of MLB teams had games postponed this weekend, with the Marlins and Phillies not having played since last week. At the time of writing, MLB Commissioner Rob Manfred stated that he intended for the remaining teams to continue playing the truncated season, although there are reports that if more positive cases erupt on Sunday, then a work stoppage would follow. There’s a non-zero chance that if you’re reading this on Monday afternoon, baseball is again in a holding pattern.

For those of you in season-long fantasy, I hear your cries. Myself, I’ve been gravitating towards daily fantasy leagues in the middle of the coronavirus epidemic, because there’s not much one can do when 20% of the league has games postponed. If you’re interested in daily fantasy, take a look at the daily free posts on this site, and check the upper right tab “MLB Tools,” where you can purchase a Daily Fantasy Subscription.

Eduardo Rodriguez — As noted above, Rodriguez has been shut down for the 2020 season. At 27 years old at the time of writing, he’s worth a dynasty stash. Although the team reports that Rodriguez should recover fully, he cannot currently throw a bullpen session due to his heart condition. In other words, he won’t be able to spend his convalescence perfecting his pitches. Treat him as a high-level prospect for now.

Stephen Strasburg — Missed his first two starts with a nerve impingement. At the time of writing, he’s thrown a bullpen session and is ready for another one on Wednesday. Follow the news this week to see if he makes his season debut next weekend.

Clayton Kershaw — Activated from the IL today after being scratched last week with back pain. Pitched 5.2 scoreless innings on Sunday, with 6Ks and 0BB. Looks like he’s back.

Jake Odorizzi — After being scratched from his first start with back pain, he’s throwing bullpen sessions again and should be on track for his season debut.

Corey Kluber — Tore a muscle in his debut, will be out for at least four weeks. Given Kluber’s struggle in returning from his broken arm last year, I would let somebody else take the risk on Kluber.

Alex Wood — Hit the IL with shoulder inflammation on Tuesday. Still hasn’t resumed baseball activities. Given the depth of the Dodgers’ rotation, and the return of Clayton Kershaw and the ramping up of Walker Buehler, it’s not the worst idea to let Wood hit the waiver wire.

Shohei Ohtani — It’s not working out. Through two appearances, Ohtani has a total of 1.2 IP and a staggering 37.80 ERA to go with his 6.60 WHIP. At the end of his appearance on Sunday, his fastball was below 90MPH, and he was sent for an MRI (results unannounced as of this writing). If you’re in redraft, it’s time to say sayounara to Ohtani-san.

Tyler Chatwood — Bieber, Scherzer, Gray, Chatwood. That’s the top four K/9 rates for 2020 starting pitchers. Now, Chatwood should be in your memory for another reason: a pitcher who has floated around since 2011, Chatwood has been the pitcher you pitted your bats against. In his last full year as a starter in 2018, Chatwood had an 8.25 BB/9 rate and a 6.28 SIERA. Chat-woof. He’s got a career 4.62 FIP. But 2020, as 2020 does, has a bizarro factor that changes things. As Chris Clegg pointed out, Chatwood has abandoned his 4-seamer and is using his cutter, resulting in 9Ks and a 60% whiff rate. I don’t believe Chatwood is going to maintain that success indefinitely, though. He’s sporting a low .250 BABIP, a ridiculous 90% left on base rate, and a nearly 60% fly ball rate–almost 20% higher than his career norm. So, if you own Chatwood, keep him for his next start against the Royals and then consider trading him.

Merrill Kelly — Razzball has two articles about him this week: One by JKJ, and one by Grey. We are indeed in “warm body” territory with our starting pitchers, and Kelly is one of the better streamers out there.

Tommy Milone — I don’t want him either, but after I put him in the 70s last week, he came forward and pitched 5IP with 8K, 0BB, and 1ER. Could do a lot worse on your streamers.

Aaron Civale — He’s in the middle of his start right now as I write, but he’s racked up 8K in 4IP against the Twins, and by the end of the game, he’ll probably in the top 5 of K/9 for the first two weeks of MLB. He’s missing bats, and those bats that connect aren’t connecting well. Civale started the season as my #50 SP, and he’s climbing the tiers quickly. 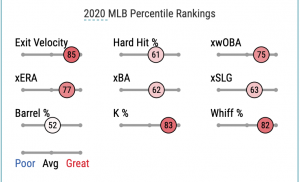 Spencer Turnbull — In two starts, the #10 SP in FIP is…Spencer Turnbull. He’s throwing one of the best fastballs in MLB right now, and hitters are making weak contact for a .105 AVG. Unfortunately, batters are teeing off on his slider to the tune of a nearly .700wOBA when they make contact; much of this seems to be luck right now. Turnbull had one of the best fastballs in the majors last year, so he’s worth grabbing in all formats to see if some of that luck against his slider regresses.

Yusei Kikuchi — We saw reports all summer training that Kikuchi’s fastball had increased in velocity, which many analysts didn’t know what to make of. At 28 years old in 2019, Kikuchi was pretty bad in his first MLB year, giving up nearly 2 HR/9 and suffering with an FIP nearing 6.00. In his first two starts in 2020, though, he’s #11 in FIP, and #9 in K/9. Although he’s walked a ton of batters in 2020, his BABIP is .400, suggesting that his future numbers could be even better once batters are getting less lucky on their contact. Kikuchi is worth rostering at this point, but given his track record, you shouldn’t get too attached to holding him if he reverts to his old home-run manners.