Please see our player page for A.J. Griffin to see projections for today, the next 7 days and rest of season as well as stats and gamelogs designed with the fantasy baseball player in mind.

Last week’s slate of two-start starters was pretty light, so it is nice to see our list back to being robust for Week 20. A week after not having any two-start starters with a positive dollar value who were owned in less than 75% of RCLS according to Streamonator, we now have three. Streamonator likes two of the starters and like likes another one. Enough stalling and fluff, here are your three beloveds for this week:

Matt Adams was acquired by the Braves for Juan Yepez, who was always a little too excitable for the Braves — Yepez!  See?  Not a good look.  It was a tearful exit from the Cardinals’ clubhouse for Adams.  His emotions hit a crescendo when he realized he couldn’t carry out all the food he had accumulated in the clubhouse refrigerator.  Through tears, “Why didn’t I learn to balance soda on my head like I was Jamaican?”  Hey, mon, they have grape soda in Atlanta.  Adams will be the 1st baseman in Atlanta until Freeman returns, while conceding to Loney on occasion, assuming Adams doesn’t try to eat him, “I thought his jersey read Baloney!  I’m a terrible person!”  Adams gets a boost in value, but mostly just for NL-Only and very deep leagues.  Anyway, here’s what else I saw this weekend in fantasy baseball: 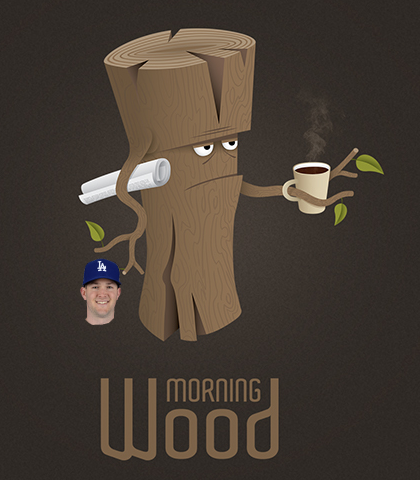 How much wood could a woodchuck chuck, if a woodchuck could chuck wood? Speaking of Alex Wood, he’s got my sundial pointing a high noon. Maybe that’s because I picked him up this week in every one of my points leagues and started him for Monday’s 11 strikeout win. Do you know what I call it when you start a pitcher from the Dodgers in a late game and wake up to find out that he struck out 11 batters? Morning Wood! Click here to see my woody.

Francisco Rodriguez was removed from the closer job, because he was being sued by a dumpster fire for trademark infringement.  A portion of the deposition transcript follows:

“Is it true that you were passing an alleyway behind a Subway sandwich shop in late-March when you remarked to your friend, Nicholas Castellanos, that you thought it would be cool to also be a dumpster fire?”

“I’ll rephrase.  What did you say to Nicholas Castellanos when you saw a dumpster fire?”

“Yes!  It was aglow like E.T.’s finger!  I am the Icarus of refuse!”  So, Francisco Rodriguez is out, and Justin Wilson is in as the Tigers’ closer.  I’d guess the Tigers will try to go back to K-Rod at some point, but I’d also think it won’t turn out any better, and Wilson will end up being a solid closer, maybe even a Donkeycorn.  I’d grab Wilson in all leagues.  Then, there’s the case of Mark Melancon, who was DL’d due to an injury near his forearm.  “But I just learned it’s not a Hard C!”  That’s a Giants fan.  This might be me overreacting, but an injury near a forearm for a closer sounds like trouble.  There’s been some disagreement about who will take over, and I grabbed Hunter Strickland and Derek Law where I could, but I’m also like Pookie for SAGNOF, fiending for saves.  *smacks veins*  Give me more setup men!  Anyway, here’s what else I saw yesterday in fantasy baseball:

“The top prospect of 2013 is Byron Buxton.  Anyone that says anything different– What’s that, you like Jurickson Profar?  Damn, he’s good too!  Okay, Profar, Buxton and maybe Travis d’Arnaud– What?  Reid Brignac?  Oh, man, you got me!  Wanna play Dominion?  No, I didn’t hide any Victory cards under my couch cushion again!”  That’s Keith Law talking to his buddies over a Coq au vin.  One name they didn’t mention back in 2013 was Tim Beckham, because he was more of a 2009 prospect stud.  That was the same year, Keith Law said, “Matt Wieters will be as good as Yogi Berra, and when I get out of my Prius and shut off this Dizzee Rascal, I will tell you why.  Talking and driving is very dangerous, especially since I’m wearing Crocs.”  Tim Beckham had it all, and the Rays produced all those can’t miss prospects.  Unfortunately, they became ‘can miss’ and Beckham faded to obscurity.  Here we are in 2017 (*checks calendar*  Yup!), and Beckham is only 27 years old and breaking out a little bit.  Yesterday, he went 2-for-4, 4 RBIs with two homers (5, 6) as he hits .278.  He still strikes out too much (33%), and he has more ‘okay’ power and speed, than blazing speed or huge pop, but, for an MI, I think you do worse.  Orlando Arcia, for unstints.  Anyway, here’s what else I saw yesterday in fantasy baseball:

In the 1700’s, magic meant going into an oven with raw meat and coming out wearing a hamburger as a hat.  That magic awed people, even though they had seen an oven and a hamburger before.  We’ve seen Thames before, and we’ve seen home runs before, but Eric Thames still feels like magic.  He is a modern day beef illusionist.  I will call him, David Copperfood.  Yesterday, Eric Thames went 3-for-4, 3 runs with his 7th homer, and 15th homer in the last four games, as he hits .405.  We go over Thames on the podcast that’s coming later today, but, damn, I wish I owned him everywhere.  Anyway, here’s what else I saw yesterday in fantasy baseball:

“Is this Men on the Move Moving Company?  Great.  I have a small problem.  Okay, it’s not small.  But it is a problem.  I have a ‘hype sleeper’ sitting here and I’m trying to move sixteen posts in front of it.  You can handle the job?  That’s great!  Can I get hyphens between each post too?  I can?  Wow, you guys are lifesavers.”  *comes in to see* Hype-hype-hype-hype-hype-hype-hype-post-sleep-hyper.  What the hell is this?!  I wanted sixteen posts in front of hype sleeper!  Not this gobbledygook!  So, Taijuan Walker flashed some of that post16-hype sleeper business last night — 9 IP, 0 ER, 3 baserunners, 11 Ks — to lower his ERA to 4.28.  It was an easy matchup (vs. Angels), but it still showed why year after year I keep going back to Walker.  He is talented.  Can anyone say seventeen posts for 2017?  Anyway, here’s what else I saw yesterday in fantasy baseball:

I was all about some of that young prospect snell early in the season, ranking Blake Snell within my top-75 preseason ranks. He destroyed the Minors in 2015, then was a little iffy when he hit the Majors for the first time. HE’S AWFUL FOREVER! As we see 95% of the time, initial failure means a prospect is forgotten, even if they start putting up solid numbers a month or two later.

And such was the case for Snell, who had a 3.86 ERA over his first 5 starts (passable), but a horrific 20:15 K:BB and a WHIP close to 2.00. He’s no Trevor Rosenthal! That aforementioned success in the Minors came with some control issues as well, so it stood to reason he might need a little more refinement. On top of that, I watched a few of his starts and his stuff looked a little too “loopy” for me. I have no idea if that makes sense… But it looked like a lot of huge rolling movement, with nothing crisp, ala a Corey Kluber or Jake Arrieta cutter. Just very bendy.

Things have gotten a lot better lately though, with a 24:11 K:BB heading into yesterday’s start against the Yanks in 24 innings. As such a highly regarded prospect and with good pure stuff that I think just needed that little extra “umpf” of crispness, I bought in heavily across my leagues and in last week’s ranks. But I figured it would be a good idea to see for myself if his breaking stuff looks a tad better than when I saw it in his 2nd and 3rd starts. Here’s how he looked:

The sixth inning of every home Clayton Kershaw start isn’t going to be the same.  No longer will Angelenos be filing in as if it’s the first, suddenly realizing that Kershaw is pitching, but now they will be stuck talking about everything but baseball for the entirety of the game and not simply 95% of it.  “Ma, can I keep score on the back of my headshot?”  “We’re not here to see the game, Timmy, we’re here to run into commercial directors.  This is where Stew’s mom got him that Tropicana commercial.  You want to pay my bills, don’t you?”  “Sorry, ma.”  Like the oral sex scene in The World According to Garp, it’s a devastating blow losing Kershaw for any amount of time.  He was diagnosed with a herniated disc, but won’t require surgery.  The Dodgers are hoping he’s back (poor choice of words) from the DL right after the All-Star Game.  I’d pray with you, but I’m using my hands to clap for not drafting a pitcher in the 1st round.  The Dodgers did pick up Bud Norris in a trade to fill in.  Won’t see any fall off there!  Anyway, here’s what else I saw yesterday in fantasy baseball: