Last week’s slate of two-start starters was pretty light, so it is nice to see our list back to being robust for Week 20. A week after not having any two-start starters with a positive dollar value who were owned in less than 75% of RCLS according to Streamonator, we now have three. Streamonator likes two of the starters and like likes another one. Enough stalling and fluff, here are your three beloveds for this week:

Lamet and Eickhoff are both guys we have talked about a few times in this space this season, mostly due to some up-and-down performances, some injuries, and some resurgences. Both are on bad teams, which hurts their value a little bit, but both have electric strikeout stuff that makes them tasty. McHugh is not someone we have really discussed here before, but that is because he has been injured for most of the year.

Now, Streamonator obviously loves Lamet the most and by a wide margin, which you can clearly see based on the values listed above. This is due mostly to his strikeout potential and his recent success. In his last four starts, Lamet has lowered his ERA by a run and a half while giving up two runs or fewer in every start and earning three wins. His 11.20 K/9 highlights his appeal, while the lowlights are his 3.69 BB/9 and the fact that he plays for the Padres. He has a good matchup against the Phillies and a not-great matchup against the Nationals, but he does get to face both of them at home in a ballpark that takes up much of San Diego.

Eickhoff also offers a solid strikeout rate, though not the elite 11.20 K/9 that Lamet offers. He hovers more around 8 K/9, which is fine. He has battled some injuries this season but seems to be on the other side of them now (cue him going on the disabled list shortly after this is posted). His 4.45 ERA is slightly inflated by an awful May and not-great June, and he has been much better in July (3.27) and August (3.55). I have him ranked slightly ahead of Lamet this week, which is mostly due to his matchups: at San Diego and at San Francisco. If you have to have two starts on the road, those are the teams and ballparks I would prefer most. At just 19% owned, he is definitely worth a stream this week.

McHugh’s last outing was, well, not great. After two straight quality starts, he got walloped by the White Sox for seven runs (note to self: cross off “walloped” from list of words you were challenged to include in an article). So, in four starts this season, we have an underwhelming season debut, two quality starts, and then a dud. The dud is probably why he is owned in just 54% of RCLs and just 33% of ESPN leagues overall. One of his starts coming at Arizona doesn’t help, either. But his other start is at home against Oakland, and McHugh has been striking out a batter per inning and did look sharp before the start against the White Sox. And even in that start, he tossed four shutout innings before the wheels came off.

Plus, he has the added bonus of pitching for the Astros. That means: 1. He has one of the best offenses in baseball supporting him, and 2. He doesn’t ever have to pitch AGAINST the Astros. The Arizona start is why I dropped him to the bottom of the Replicas tier, but he should still be a solid value start this week. Now, for the rest of the list… 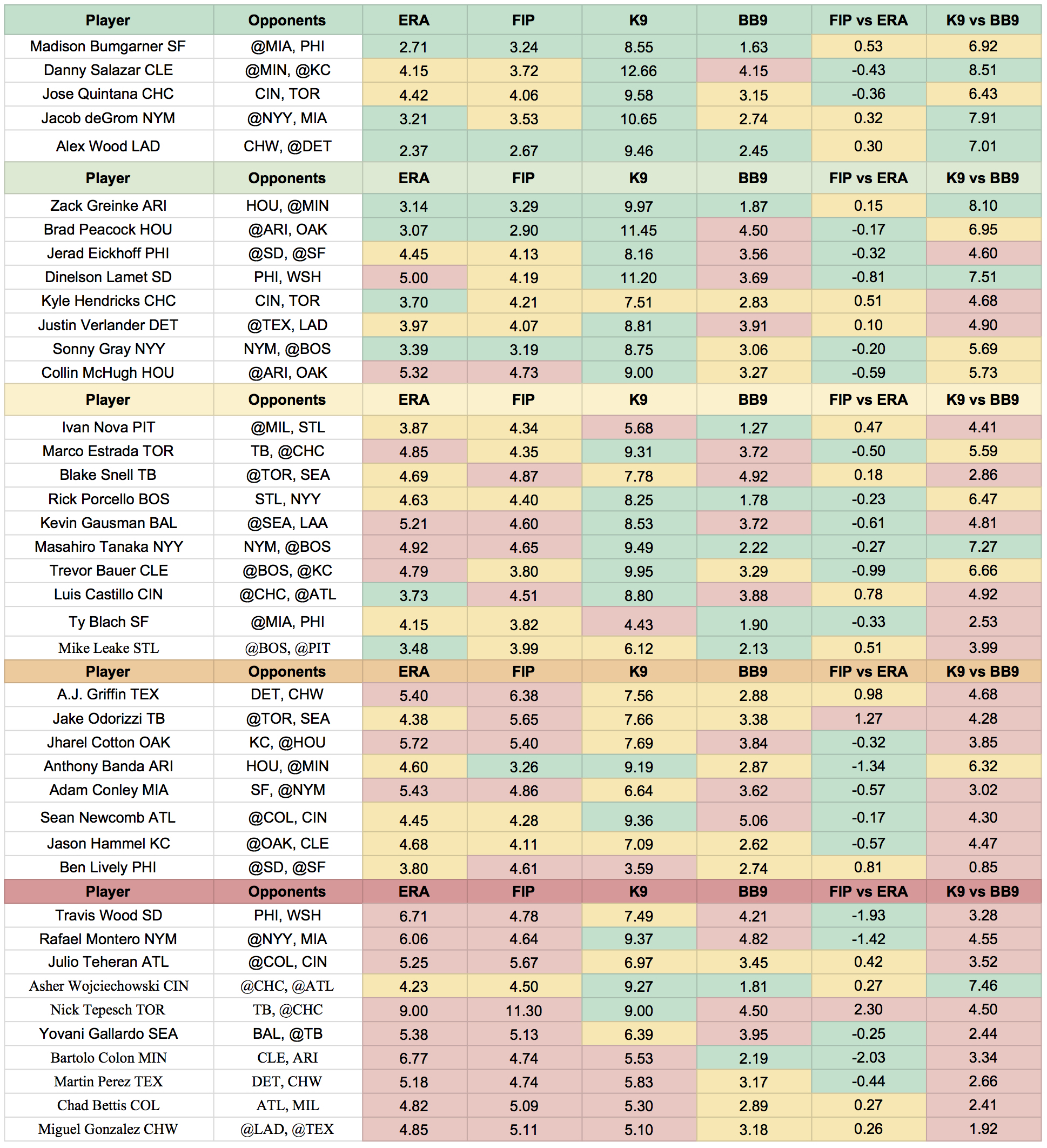 I always roll with 2 starts pitchers (Point league) but now I have Arenado injured..

I need to drop one of these (Salazar, Senzatela, Eickoff, Griffin, Conley) to pick up a 3rd basement as well as start one of these:
Morton, Happ, Duffy, E-Rod

What do you suggest?

I would drop Senzatela and probably start Duffy at Oakland.

Doesn’t appear that Bum will 2 step.

Mike,
Nice job once again. Any interest in Nova? I dropped him 2 weeks ago (or maybe it was last week), but whatever the case, it was a few weeks too late. You have him in The Standards, so you obviously like him a bit. Would you risk it?

Yeah, saw the question on A. Wood and 2 starts. I actually have Darvish, Hill, Wood and Ryu on a team, so although I have say 65% to 75% of their current staff (missing the key one of course), I am having a hard time recalling a 2 start from one of these guys. Pretty frustrating.

I don’t love Nova but have streamed him a bit this season based on matchups. The thing with him, obviously, is that even though he has pitched fairly welll he is just never going to strike out a ton of guys. I like him this week because of his matchups, but that is about it.

And yeah, the Dodgers have been the worst offenders of fantasy headaches this season.

Looking forward to 2018, do you see any WW players that could be sneaky adds now for next season? I realize you don’t know my WW, but just generally speaking….guys trending upward on the low end of the spectrum.

Anyone rolling Fister out vs CLE and NYY? I am in 8th place, might as well

Haha, I would certainly not do so confidently, though he has a looked a little better his last two times out. Still, the potential for implosion for him is real.

Drop manaea in a 10 tm h2h league for a streamer spot, or are you still holding him?

Yeah, unless it is a keeper or dynasty format I think you are safe to move on at this point. Mid-August, especially in a H2H, is no time to be messing around with what he has been doing.

@mikeMaher: Well I own him at a $5 value in my keeper (keep 5 players) but tbh there are other guys I’d probably keep over him so that’s not really a consideration.

Yeah, makes sense. He’s definitely not a consideration in my keeper forever league where you keep 4 guys.

CBS’s info makes sense, but Gray is all over the place on different sites this week. Other sites have him not starting twice at all.

If he does actually start the games you mentioned, I think I would probably put him around where Nova is.

Tanaka hits the DL, so that one goes off the list.

Really expect Wood to make 2 starts next week? Every publication I’ve read show him making only 1.

@Fogimon: Plus, Dodgers have 5 games next week and a 6-man rotation. Something doesn’t add up.

Nothing about the Dodgers’ rotation ever adds up this season. We should probably just list the Dodgers as a team in the two-start starters every week next to a shrug emoticon.