Things have been interesting as usual as we are approaching the end of the first calendar month of the MLB season –  future Hall-of-Famer Miguel Cabrera reached 3,000 hits, the Rays threw nine no-hit innings in a game that ended up not being a no-hitter, and MLB is allegedly using two different kinds baseballs in games.

While batting averages are down, there is still plenty of value to be found at the shortstop position. Here’s a look at the shortstop rankings so far, keeping in mind the season is only a few weeks old:

1) Trea Turner – Dodgers – Turner’s 27 game hit streak came to an end, but he’s contributing across the board and should ramp things up shortly.

3) Bo Bichette – Jays – Bo has started the season slow, but I’m still a believer in the talent and I’m sure these few weeks will be a small blip when we look at his stats at the end of the year.

5) Trevor Story – Red Sox  – Another slow starter but I’m not ready to panic and assume this is a repeat of Lindor’s first year with the Mets.

6) Tim Anderson – White Sox – Anderson is batting over .300, exhibiting the power and steals combo we’ve seen from him the past few years. He’s been among the few dependable bats in the banged-up Sox lineup that just lost Eloy Jimenez for the foreseeable future.

7) Xander Bogaerts – Red Sox – The X-Man is off to a great start and has 200+ million reasons to earn a fat contract if he (likely) opts out after the year.

8) Marcus Semien – Rangers – Well, that’s a rough-looking Savant page. I’m gonna give Semien another few weeks before dropping him from this tier. 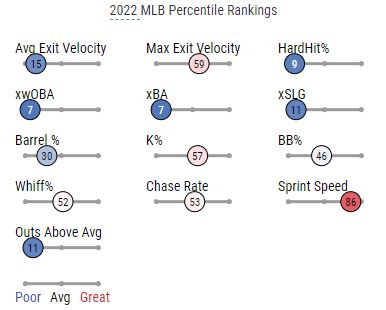 9) Jorge Polanco – Twins – A mixed bag for Polanco, as he’s walking and striking out at career highs. He’s still batting in a premium spot in the Twins lineup and I’m giving the veteran the benefit of the doubt that he will rebound.

10) Javier Baez – Tigers – Baez has roughly 20 AB’s, as he’s recently been activated from the Injured List.

11) Adalberto Mondesi – Royals – Mondesi has been ice cold.  Here’s to hoping the steals rise as the temperature does for the sake of the Razzball fam.

12) Jazz Chisholm Jr. – Marlins – Smooth Jazz has been outperforming his expected stats thus far and I’m sure we’ll see some negative regression. However, he’s been everything and more for his owners as of now.

13) Jake Cronenworth – Padres – Although Cro has been slumping, he’s walking at a career-best rate and his BABIP is roughly 100 points below the league average. Jake can be one of the biggest risers from his current stats over the next couple of weeks.

14) Chris Taylor – Dodgers – Taylor continues to do his thing, be a productive cog in the wheel that is the Los Angeles Dodgers.

This tier of players is pretty much interchangeable. We know what kind of players these guys are, and while they’re currently underperforming, they are safe bets to rebound.

This group of players has the potential for big moves up the rankings in a month or so. Lux has been getting plenty of playing time. Rodgers has an ice-cold Savant page, but I’m giving him some time to heat up. Witt has been for now due to a 4/0/4/.184/.216 line, but hey, even the great Mike Trout struggled in his first go-around in the majors. Look for Witt to settle in shortly.

Tyler Wade and Thairo Estrada make the list due to their strong starts. Grey told you to BUY Wade and Estrada. We’ll see if they’re just schmotatoes or not.

Have a great week and keep an eye out for the next big MLB milestone, which should be Clayton Kershaw becoming the all-time Dodgers strikeouts leader.

As a Marlins fan I watch virtually every Marlins game, Jazz is legitimate.

I just think if he were on a big market team he’d be getting more love.

He’s been outperforming his expected stats for 2 years now lol.

People salivate over the oft injured Mondesi who never has an OBP over .306 but Jazz is the one who can’t get on base and K’s every at bat. Same with Baez. I don’t get it. The first cold streak though Jazz will be a fluke and overrated.

Anyways, great write up!! I’m glad I used a 3rd rounder on Wander, I feel like that’s a steal.

If I were a Marlins fan, I’d probably feel the same as you! No doubt, Jazz is a talented player and there are definitely players that outperform their expected stats year in and year out. That being said, I do think Jazz will have some negative regression come is way, but Jazz is young and talented enough that he will eventually make adjustments.

Regarding Mondesi, this has to be his make-or-break year. The OBP drain is very significant, and there are many times where he simply looks lost against off-speed pitches. He’s ranked where he is due to his boom or bust potential. Another few weeks may drop him down the ranks.

Thanks for reading! Yes I grabbed Wander early in one of my leagues (I believe 3rd round too) and am feeling pretty good about that!

Love your articles. Keep up the great work!

I agree about Jazz, but he is young as we know and when a talent improves it can only get better in regards to floor and ceiling. So stoked for their future!!

Love your articles. Keep up the great work!

I agree about Jazz, but he is young as we know and when a talent improves it can only get better in regards to floor and ceiling. So stoked for their future!!

Thanks for the kind words, much appreciated! Yes re: Jazz, a lot of hyped players (especially in keepers/dynasty) do seem to get written off if they don’t succeed immediately. If negative regression comes his way later this year, by no means is his career over. You Marlins fans should definitely be excited for Jazz, especially that the Marlins traded out of a position of depth (Gallen) to get a much needed middle infielder. I can see those pitchers all clicking in a year or two and making life trouble for the rest of the league.

I just can’t wait for that Kahlil Jazz duo. Hopefully we get it and they don’t do anything stupid. They have such a surplus of SP I really hope they trade for a top tier prospect or MLB ready position player.

I think Wendle or Rojas can be decent stopgap options for the next couple of years. Khalil is more of a 2024/25 guy right now. I could see Lopez, Rogers and/or Eliser Hernandez getting dealt this season or next to say, the Orioles or Jays for some hitting, but yes always seems come down to good drafts and player development.

Someone in my league dropped Willy Adames. For a UTL spot, would you drop Votto to grab Adames in a 10tm OBP league?

Since it’s OBP, I would hold Votto for a while longer, he’s typically a slow starter. Last year he caught fire towards May/June.

Swanson was #14 preseason for Grey between Jazz & Seags… he’s not in your top 25? typo or just a huge difference in opinion?

Ah oversight on my end – would have him end of Tier 4 or towards the top of Tier 5, nice catch.

Hi, I know is difficult to rank injured players, but where will you rank Tatis when he returns?

Wrist injuries usually zap power for hitters, but Tatis is an elite talent. He had such an incredible season last year with all his shoulder issues that I’d be comfortable ranking him a top 5 shortstop when he returns.

Scar
Reply to  Don't be a Hader

Nicky doesn’t excite me too much. I chose to leave him off because he’s a zero in power and hasn’t stolen a base yet.