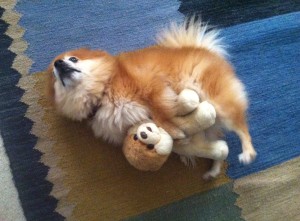 Yes, that is a dog dry-humping Boo the star Pomeranian in stuffed animal form. He does it all the time, but for some reason it seemed profound to me and strangely relevant to this week’s batch of pitchers. [Jay’s Note: Uhhhh. Okay?] Perhaps my dog represents the fantasy gods, and Boo is fantasy owners everywhere, especially those on the playoff bubble in their leagues. No Clayton Kershaw, no Max Scherzer, no David Price, no mega-aces to speak of. Combustible No. 2’s. A lot of mediocrity. Dudes obviously pitching over their heads, and dying to, well, eff you over. And then the looming threat of namby-pamby real-life baseball managers pulling guys early in games to get ready for the real-life playoffs and even scratching top-flight starters with mysterious blisters, hangnails and other assorted bogus injuries in an effort to save them for the postseason. The nerve! But I see two little gifts from these same fantasy gods: Two guys with potential who have good-to-great matchups this week.

First up is Eric Stults, a Hodgepadre with two home starts (Brew Crew and Dodgers) and a nice run going. He’s 3-1 in August with a 1.49 ERA, and only one of those starts was in Petco. Also, he’s only walked two guys in his last three starts, and has the potential to strike guys out on top of that. Then there’s Dillon Gee, who looked like a potential ace out of the gate this year but then missed two months with a back injury. He’s been about as appealing as amusement park food since his return, racking up a 5.50 ERA and a 1.33 WHIP with no wins over the last 30 days. But if you drill down into his last four starts, he hasn’t been that awful. He held down the Giants for the most part on Aug. 4, giving up two runs over 5-plus innings. He then dominated the flat-lining Phillies in Philly. Now I’ll make some excuses. Is there shame in getting a little shaken (4 ER in 5 innings) in a loss to the first-place Nats at home or a road loss to first-place Oakland? This week, Gee welcomes two beatable opponents to Citi Field: The strikeout happy Braves and then those same crappy Phillies. I like Gee and Stults as streamers who won’t “screw you over” (heh) and nothing else. Now let’s see what else we got in the Two-Starter cupboard this week.

We got two Woods going this week and one Bumgarner. Ouch! Cueto was on quite a roll until his most recent stinker in St. Louis, but that start against the Cubs is yummy!

I don’t get the lack of love for Tanner Roark. If you need wins and peripherals, he won’t let you down.

I also don’t get the lack of love for Matt Shoemaker. Even after Grey professed his love for the man who looks like he’s wearing one of those fake winter beard hats, still no love.

Considering matchups and recent performance, if you have these guys and need to battle to make the playoffs, I’d roll them out there with confidence. I have more faith in Pineda than most, even against the Jays on the road.

These guys I’d stream but would feel kind of eh about it. Burnett sucks, period, end of story and I don’t mind saying it at all. Perhaps my feelings are colored by the fact that I’m a Phillies fan, but I see nothing of interest in a guy who is 6-14 and is only consistent in giving up 4 or more earned runs every time he takes the mound.

You are desperate. You must eat the cat poo.

Plouffe or Seager?
Hanley (coming off DL) or Hardy?

He’s coming off the DL and has favorable matchup’s and I don’t think he’d be activated unless fully healthy?.

Pete Nice
Reply to  Tarman Got Him

@Tarman Got Him: Well he might be fully healthy but that doesn’t mean he’ll be great for fantasy – could be on pitch count or handled with kids gloves.

Quintana or Tillman ROS? Streamers both?

DeGrom will turn it around after that start obviously first one off the DL?

Would you drop Mejia if you own Melancon, Street, Rodon and Chapman and need a stream spot?

Pete Nice
Reply to  Tarman Got Him

@Tarman Got Him: Tillman might be someone you hang onto for a bit. I’m worried about DeGrom. and: yes.

I’m about to enter the playoffs next week. I’d like to hold Gregory Polanco but he’s not playing regularly and I need the offense. It’s a keeper league so that makes dropping him worse. Should I drop him for Morse, Ozuna, K. Vargas, Arcia or should I hold for the playoffs in a H2H points league. Thanks.

@Chris: Tossup between Ozuna or Kennys first, then Arcia and then Morse. But the answer is yes, dump him.

Hey,
Cashner, Kennedy, or Odorozzi for rest of season?

How bout Wei Yin Chen? Or however you spell his name? And James Paxton?

Pete should i start cashner and degrom today?

@Joe: Sorry I didn’t get to this in time. I’ve been a DeGrom guy but the shoulder is worrisome.

How would you rank McHugh, Shoemaker, and Paxton RoS?

So, I just lost Garrett Richards for the year and all the good closers in my league are gone. Picked up Mark Melancon but I am not confident that he’s gonna put up any points…is it crazy to stream Hector Noesi for a two-start reliever this week or should I just play it safe and pick up Drew Smyly?

@Trent: I would never call Smyly a “safe start” haha. But I’d go with him nonetheless.

Great write up as always Pete. I love to see the rise of Odorrizi this year, dude’s gonna be a stud muffin! Roark has also been reeeeally good.

Quick shot for the experts: Syndergaard/Kennys or Freddy in a h2h points?

@Ace Ventura: I like the Kennys package but what’s the circumstance? Trade?

I’m playing the PO’s this year in a dynasty league. I’d be moving noah/kennys. Just not sure if this is a great sell high for kennys or if I should hang tight with what I got. =)

You da man Pete thanks!

@Sky: He’s already signed to Vivid Video. Plus he’s packing some surprising heat down there, and I didn’t want to take Razzball into x-rated land.

Haha… Your dog is a Furry!

@Grey: Hmm, I did think it was weird that I found him in the Casual Encounters section of Craigslist.

Good stuff, as always. Thanks.

One-and-done playoffs this week, must-win. It’s a points league, and I need to choose one of these three (current streamer numbers in parens):

Sonny is scuffling (last night he looked sharper) and Houston has been hitting. The Twins’ bats are on fire. Buttnett seems like the choice, but he’s been horseshit since mid-July.

@AJax: One thing to consider is how does your league weigh each category, and how many categories are there. AJ will get you K’s. But he walks guys, will give up earned runs and will only get one win at the most, and even that is not likely. If there’s goofy stuff like GIDP and pickoffs, that’s more in AJ’s favor. But if there’s more value on wins, era and whip and cats for CG and or shutouts, I like Sonny.

If Streamer didn’t like Burnett, it’d be easy to discard him. But I don’t know. I’m struggling. And the waiver wire ain’t got nothin’. The top guy available is Jorge of the Rosa.

@AJax: I love the SON, and usually swear by it, but if you’re basing your decision on its opinion of Burnett, I wouldn’t feel so good about that.