This top 20 shortstops rankings certainly looks way different in July than I envisioned way back in the preseason. Many player values from the preseason have skyrocketed and/or fizzled in value as we approach the All-Star break. As usual, we have our injuries (Fernando Tatis Jr., Jorge Polanco, Adalberto Mondesi), ineffectiveness (Marcus Semien, Corey Seager, Javier Baez), and a combination of both shaking up our fantasy landscape.

Players with long-term injuries like Fernando Tatis Jr. have (sadly) been omitted. Here’s the rankings moving forward, which have both past and future valuations factored in:

1. Trea Turner – Dodgers  – Trea ranks among the few first round picks that haven’t tanked our fantasy seasons (looking at you: Fernando Tatis Jr., and Bryce Harper). Slashing a robust 43/11/57/.306/.354/16 line, Trea has been contributing across the board per usual and is showing no signs of slowing down.

2. Dansby Swanson – Braves – Swanson is finally living up to his 2015 #1 draft pick status and ranks among one of this year’s most valuable players, not only with his accrued stat line to this point but how cheaply he was available in drafts this season. The Braves have moved him up to #2 in their lineup and will likely stay there all season, as he owns a 50/14/46/.305/.364/12 line. Swanson has been killing fastballs (+11 run value), likely a product of batting in between Ronald Acuna Jr. and various combinations of Austin Riley and Matt Olson. Swanson’s another example of how highly-regarded players and prospects don’t always develop in a linear fashion.

3. Tommy Edman – Cardinals – Tommy boy has been another one of fantasy’s MVP’s, with a 58/7/32/.270/.341/19 line and setting the table for big bats Paul Goldschmidt and Nolan Arenado. While there are many reasons for Edman’s breakout season, I’d like to highlight his tremendous OBP increase (up to .341 from a paltry .308 last year).  Death, taxes, and the Cardinals development system pumping out productive players right?

4. Bo Bichette – Blue Jays – Bo hasn’t lived up to his first round draft pick status so far, but this ranking here is more optimism than what Bichette has currently done (44/12/43/.257/.299/5). Why the optimism? Bo’s xBA is .284 and this year’s barrel rates and exit velocity are in line with what he produced last year.

6. Xander Bogaerts – Red Sox – The X-Man keeps doing his thing, flying under the radar among fantasy shortstops. Xander is not having a breakout season like Dansby Swanson, and he is not a player scrutinized for poor production such as Javier Baez or Marcus Semien, but Xander keeps chugging along. Xander remains a key cog in the Red Sox lineup, slashing 47/6/31/.325/.395/3. Look for Xander to have a great summer and force the Red Sox front office to pay up for his services.

7. Jazz Chisholm Jr. – Marlins – Jazz is currently IL’ed with a nagging back issue, but has registered a productive season thus far: 39/14/45/.254/.325/12. Hopefully he can take the All-Star break to heal and pick up where he left off before his injury. The power and speed blend is electric and if he does experience batting average regression, Jazz will still remain a productive player, as the MLB league-wide average this year is .242 per Baseball Almanac.

8. Trevor Story – Red Sox – Story has had a rollercoaster season, with an ice-cold April and scorching-hot May. Story has had a decent June in the counting stats department, bringing his line to 43/12/52/.222/.298/10. The average and OBP will likely remain low for the rest of the season, and his 30% strikeout rate is worrisome. Fortunately, Story has Fenway to call his home park, which will provide him with some much-needed BABIP luck.

13. Francisco Lindor – Mets – Another player who has seemingly alternated between hot and ice-cold streaks this year. The hope is that as the Mets get healthier, the counting stats will come in bunches.

14. Bobby Witt Jr. – Royals – The rook has had a solid fantasy season thus far, batting 41/11/39/.236/283/10. His max EV is in the 93rd percentile, and sprint speed is in the 100th percentile. Witt is spraying the ball all over the field and is showing off his 5 tools. He’s a few adjustments away from becoming a mainstay in the top few rounds of drafts next year and beyond. Below is his beautiful spray chart. 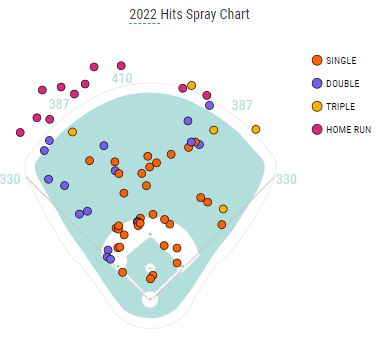 15. Marcus Semien – Rangers/16. Corey Seager – Rangers – Whoever said money can’t buy you happiness was right. $500 million dollars later and the Rangers must have some buyer’s remorse. At least Seager is running into some bad batted ball luck (.288 xBA v. his actual 226 BA), but Semien has “earned” his terrible 41/9/33/.231/.287/10 line. While Semien and Witt’s lines look similar, Witt is ranked higher on this list because his numbers and career are on the uptrend.

17. Amed Rosario – Guardians – Rosario has been hot of late, bringing his slash line up to 40/3/23/.287/.322/9. Of course we’d like to see more power, but the growth of Rosario and Gimenez is softening the blow of trading Lindor to the Mets.

20. Jeremy Pena – Astros – If it weren’t for some guys named Julio Rodriguez or Bobby Witt Jr., Pena would be an American League Rookie of the Year frontrunner. Fortunately for the Astros, Pena’s underlying stats back up what he’s been doing thus far: 31/9/27/.266/.318/6. His sprint speed is elite and we could potentially see more stolen bases moving forward.

Have a great week!

I picked up Luis garcia w h en jazz went on IL. He is holding his own so far. Any thoughts on his value for 2023?

Looks like Luis Garcia will be the shortstop for the Nats rest of the year. If he holds is own, he could be a sneaky middle infielder play at the end of drafts next year in a deep league. The counting stats won’t be there unless the Nats drastically improve their lineup, but a .260/15/10 year is fairly reasonable of an outcome.

Yes Semien has had a good June, but that’s about it.

Yeah he’s been one of the top scorers on my points league team this past month. Helped me make the mid-season playoffs.

Do you see Cruz busting into these rankings by year’s end, or, do you estimate him getting into the top 20 next year?

Thanks for the write-up!

Scar
Reply to  Jolt In Flow

I can definitely see Cruz cracking the Top 20 by year’s end. I wanted to include him in the rankings but struggled where to put him after a couple weeks worth of at-bats over guys who have had full seasons so far. That being said, Cruz is an immense talent. He’s hitting the ball hard and showing great tools. I wouldn’t be surprised to see him around the top 13-15 by end of the year, and I’m confident he’s at the least a top 20 shortstop next year. His price may be very high in drafts next season. Thanks for reading!