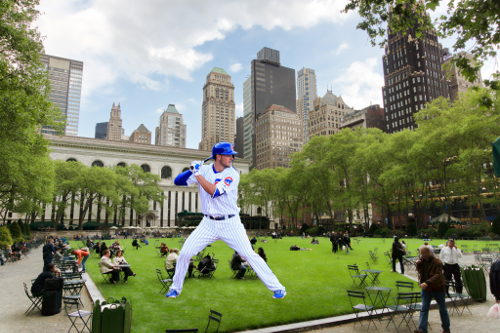 Those of you that live in the New York City area or have visited the world’s greatest metropolis have likely walked past Bryant Park. Perhaps you even stopped to take a leak or even sat down on a nice sunny day to do some fantasy baseball research and adjust your lineup. Located between between Fifth and Sixth Avenues and between 40th and 42nd Streets in Midtown Manhattan, Bryant Park is actually built on top of an underground building containing the archives for the New York Public Library. I know… who gives a shift. Besides, I’m more of a Washington Square Park kinda guy anyway.

For those of you that thought Bryant Park was the name of the Chicago Cubs spring training stadium, guess again. That would be Sloan Park in Mesa, Arizona, which happens to be the largest spring training stadium (by capacity) with room for 15,000 people. [Jay’s Note: Had amazing sight lines, rugged, yet modern feel. 8/10, would go again.] I think that translates into 25,000 little people, but my math could be wrong. Despite his herculean efforts this spring, not only did they not rename the stadium after him, but Kris Bryant was denied the opportunity of being on the Opening Day roster. Instead, Theo Epstein gave us all some bullshart excuse that he needs more time in the minors. Listen Theo, say what you want, but there isn’t a baseball fan north of the border that doesn’t believe this isn’t a service time maneuver. I’m not a Boras fan, but I love how he called him out on this. Even Cubs manager Joe Maddon has said that he’d love to have him in the lineup. I guess I’ll see you in a few weeks Kris.

Allow me to present to you the 2015 All-Spring Training Fantasy Baseball Points League Team.

A couple minor things to mention. The stats were taken as of Tuesday (3/31) around noon time. The minimum requirement for being included in the list was 30 at bats for hitters and 10 innings pitched for hurlers. The pitchers ended up being all starters since closers really don’t close in spring training. Even though he is playing second base I put Ben Zobrist at SS since he is eligible there.

In 40 at bats, Kris Bryant has hit 5 singles, 3 doubles and 9 home runs. Combine that with 14 runs scored and 15 runs batted in, you have quite the stat line. Although it would be incomplete if I didn’t mention his 14 strikeouts. Those number produced at .425 batting average and 66 fantasy points. I’ve got an idea, let’s send him to the minors. After hitting 43 home runs, driving in 110 RBIs, scoring 118 runs and stealing 15 bases last year I really think he has more to prove.

With those numbers you’d expect Bryant’s 66 points to be the most among hitters, right? Wrong! That honor goes to none other than, Mike Trout (73 points). Seriously?! I just can’t get away from this guy. So far I own him in zero of my leagues, but I still have two drafts left. So you’re saying there’s a chance? A slim one. I actually don’t want to own him. Not because I doubt he is the best hitter, but because in order to do so in roto, you have to have the first pick. I hate picking on the ends of a snake draft. I much prefer being on the inside and not having such a gap between picks.

While Trout outpointed Bryant by 7 points, he also had 10 more at bats. With Bryant’s 1.65 points per at bat rate, giving him another 10 at bats would have put him at 82.5 points. Yada yada, I know. Here are Trout’s numbers for the spring:

I’ve attached a spreadsheet containing all of the spring training fantasy points, but here are the top hitters and pitchers. In the spreadsheet you can modify the “Points System” worksheet to reflect your leagues points distribution.

C.J. Cron is starting to get my attention. Last year he hit 11 homers in 242 at bats. This year playing time was expected to be an issue, but with Josh Hamilton out, he should get everyday at bats. Could he hit close to 30 home runs?

You’d have to be crazy not to have Mookie Betts on your watch list. The kid has top 25 outfield potential written all over him. And how about A.J. Pollock. I passed on a lot of bigger named outfielders to wait and draft you.

I’m a fan of Ben Zobrist. I love his multi-position eligibility and think he’s going to score a lot of points. Howie Kendrick is another player I have higher expectations than most. I’ll just call it a hunch. Can Matt Kemp rebound? How about The Hebrew Hammer? How will Prince Fielder bounce back? And due to his late ADP, I have been grabbing Eric Hosmer in a lot of leagues.

Taijuan Walker, Seattle Mariner is leading all pitchers (and hitters) in points so far this spring with 106 points to the tune of 25 IP, 3 wins, 1 earned run, 9 hits, 4 walks and 24 strikeouts. Those are exceptional numbers and I am excited to see what he has in store for the regular season. Keep an eye on Walker. I’m expecting great things out of Seattle this season.

There are a lot of familiar names atop this list, including last year’s NL rookie of the year, Jacob deGrom, and NL Cy Young winner, Clayton Kershaw. But what about this Kendall Graveman dude? He’s been pitching great this spring and seems like a lock to make the A’s starting rotation. He’s not a strikeout pitcher, but he appears to know how to get batters out. I’m kinda feeling Jered Weaver this season. I’ve talked to quite a few people that are down on him, but I have high hopes. And those are “naturally” high hopes. Then there’s Andrew Cashner. Please let him stay healthy. I’d love to see what he can do in a full season pitching in pitcher-friendly Petco Park. Cash is king. Show me the points Andrew!

Now that Carlos Martinez has won the 5th spot in the Cardinal’s rotation, I think he is going to be a very good weapon in points leagues given his RP eligibility. I’ve scooped him up in a few of my leagues. Along the same lines would be Aaron Sanchez. No, not the Mexican chef guy on the Food Network shows, but the RP eligible pitcher for the Toronto Blue Jays. I expect both to have their ups and downs, but needless to say, I am intrigued.

I am looking forward to my first season contributing to Razzball. You never know what to expect from me and my affinity for immature toilet humor. Was that a redundant statement? Is there such a thing as mature toiler humor? I think Beavis and Butthead are legendary and I listen to The Howard Stern Show on a daily basis. I’m a software developer that loves The Legend of Zelda, Nine Inch Nails and fantasy sports. Those of you that had the pleasure of reading my posts on the football side of things this season know that I definitely have a distinct style. Love it or hate it, I am here to offer my thoughts on points leagues and hope that at least some of you will find some value in my words.

I have just one request. When asking a question, please include your league’s point system. Without this it’s pretty difficult to give you a calculated response. Good luck this season!

For those familiar with Streamonator, Hittertron and the other top notch tools provided by Razzball you can now buy a subscription to access these game changing services by clicking “Subscribe Now“. For those not familiar with them, I suggest you find out more about them. When I asked Ferris Bueller what he thought about the subscription options, here’s what he had to say “It is so choice. If you have the means, I highly recommend picking one up.”