The number, and complexity, of new stats to evaluate pitchers is amazing. No doubt, there are edges to be found by parsing this data. Some of the sharpest minds in baseball are assessing this mountain of information to better describe & predict player performance.

There is one pitching stat that captures the majority of what we fantasy players care about, is infinitely more accessible than all the new metrics, and has existed long before Statcast: K-BB% (strikeout % minus walk %).

Yeah, I’m not exactly revolutionizing baseball analysis here. 10 years ago, sharp fantasy managers were using this stat. K-BB% is simple. The more batters you strikeout, and the fewer you walk, the better. Outs are good, on-base is bad, and you’re wondering why you’re still reading. Can one metric (one that we’ve had for a long time) really encapsulate the complexities of pitching?

Well, not really. But evaluating all of these complex factors takes time, and effort, and analytical skill. Feel free to spend all your free time learning about the intricate metrics and data available. If you have the analytical chops & free time, for some of you, that’s fun. More power to you.

For the rest of us, if we can get 90% of the way to the same answer at 10% of the effort, that leaves more time for other things. Most fantasy owners would be better off spending more time planning how to beat their league via strategy and game theory than trying to become the next Eno Sarris.

To use a software development term, let’s smoke test this metric and look at K-BB% results. If this metric is still a good one, we’d expect the top pitchers to do well. Here are the top 10 SP, combining the 2nd-half of 2019 and all of 2020 to get a larger sample size (100IP min):

Enough preamble. On to the chart, showing K-BB% and relative ADP: 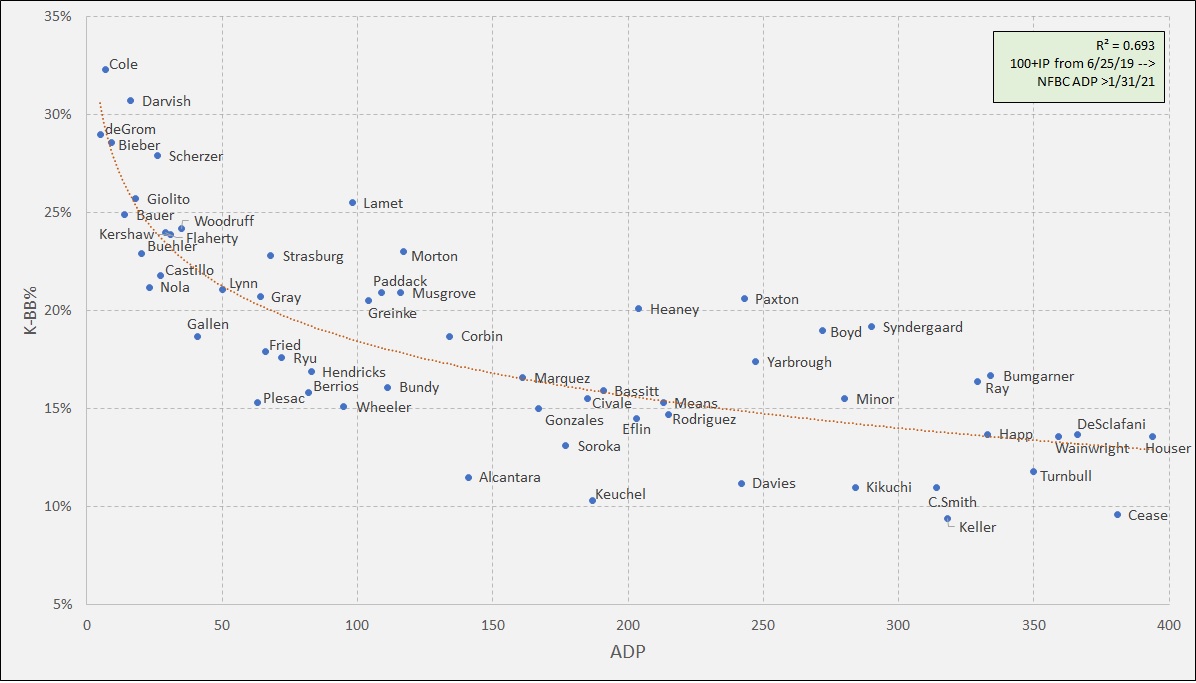 Very simply, pitchers above the line are costing less than their K-BB% would suggest, while pitchers below the line are overpriced by this one metric.  Let’s look at some players to target/avoid.

For the most part, the top-drafted starters are also great by K-BB%. A few notes:

You start to see some real discrepancies once you get out of the first few rounds. Of note:

Plenty of guys to target & avoid as we enter the middle portions of the draft:

Quick hitters on a handful of guys:

Who do you like better than their K-BB% would suggest? Let me know in the comments.