No real blockbuster-type stuff this week after last week’s doozy of a trade, I’m afraid, but we have had a few big signings and plenty of trade/free agent rumors fluttering about in the breeze.

Really, it’s just a slow offseason so far, all things considered. Going by ESPN’s list, six of their top 10 FAs are still on the market. Only 12 of the top 50 have been signed. Spring Training is supposed to ramp back up in less than two months from now, but a vast majority of players are still standing on the sidelines with one thumb in the air, hoping someone stops by and opens their passenger door.

Anyhoodles, let’s get caught up on the past week:

Headliner Liam Hendriks is the new closer for the White Sox. This only boosts his stock, even as high as it was already. But think about it – he’s with the best team in the AL Central now. A team that added Lance Lynn to the rotation. The Twins are the only other team worth much of a damn. The Cleveland Baseball Team is still packing some good heat in the rotation, but they’ve lost valuable bats and their closer. You know it’s bad when the Browns are the sexiest team in Ohio right now. It’s Chicago’s division to lose, and now they’ve got arguably the best closer in baseball doing his darndest to make sure that doesn’t happen. Hendriks went off last year, going 3-1 with 14 saves, 1.78 ERA, 0.67 WHIP, sub-5 H/9, 40.2% K-rate, and a microscopic 3.3% walk rate. He earned a career-high 38.1 O-Swing% and 19 SwStr%. Hendriks finished 2020 as Razzball’s #22 overall player on the Player Rater. That’s out of everyone, not just pitchers, just in case that “#22 overall” part wasn’t clear.

D.J. LeMahieu is sticking with the Yankees! Rejoice, DJLM owners! The power shall remain! I’m still a big DJ fan in any uniform, but his profile fits with Yankee Stadium like Skippy Natural creamy peanut butter and raspberry jam (that’s the best pb&j you’ll ever have right there). In case you’d forgotten, 27 of DJLM’s 36 HR as a Yankee have come at home. Not much more needs to be said. Strong lineup, strong contact hitter, and a solid power hitter as long as he’s at home.

Kyle Schwarber is your newest member of the Nationals. I’m interested to see what he can do with a new squad and better quality bats ahead of him in the lineup. Josh Bell should at least be better than what he was last year, and then you’ve got the obvious 1-2 punch of Trea Turner and Juan Soto on top of that. Schwarber is a year removed from a solid enough .250/.339/.531 slash line and 38 bombs. He strikes out like an off-brand match, but the walk rate keeps the OBP pretty healthy (except for last year…but hey, 2020 amirite?). He’s had a double-digit walk rate every single year of his career, at least. There’s definitely potential for late-round power numbers here on draft day. Nationals Park provides boosts to LHB in all respects (except triples, but dude ain’t hittin’ no triples lol). 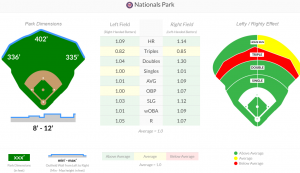 Here’s another visual to help you understand the boost his new park could provide. Bird’s Eye 3D spray with venue set to Nationals Park: 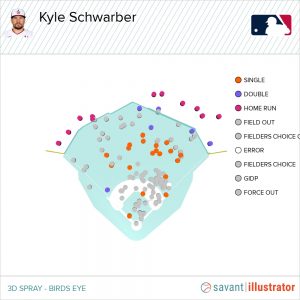 So there you go. Looks pretty all right to me! A few of those dots would be changing colors, that’s for sure. And as yucky as the raw stats looked for 2020, dude still managed to be among the very best in exit velocity and was well above average in barrel rate and xwOBA. Schwarb’s NFBC ADP is sitting right around 200 right now; I’m feeling rather confident he can return much greater value.

Jose Martinez signed a deal with the Mets, but he is by no means guaranteed an MLB roster spot. Don’t get thinking Martinez is a lock to see regular ABs and is primed for a bounce-back after a poopy 2020 season. This is by no means the case. The deal is a split deal; he’ll make $1 million if he makes the team, plus extra if he performs well. Martinez was a very productive hitter for the Cardinals for a few year, but struggled mightily with the Rays and Cubs. I’ll never say never, but he’s still not even on my radar at this point given he’s competing just to make that roster. Especially if the NL DH doesn’t happen.

Archie Bradley figures to be in the mix as the next closer for the Phillies. Wouldn’t call him a super sexy closer option, but the career-high 4.1% walk rate last year is a very good sign. On the flip side, he’s got competition in Hector Neris and maybe even Jose Alvarado. My money would be on Bradley getting the first crack at it given his recent success and everyone else’s recent struggles. Either way, in saves/holds leagues, you can pretty much bank on some solid value here.

Alex Wood penned a one-year deal with the Giants. Part of me really wants to roster the guy, because he’s legit good. The other part of me looks at that injury history and has no interest at all. San Fran isn’t that good, either, of course. Tough division. I’d probably advise you to shy away. Maybe Best Ball is a good fit? He had a pretty rough 2020 (not helped by his .385 BABIP) but still managed career marks in SwStr% (12.6) and HardHit% (26.8). He’s not old yet. I dunno. There’s stuff to like here, but for me, there’s just more not to like. Mainly the can’t-stay-healthy and pitches-for-a-bad-team-in-a-good-division parts. If he falls and you feel like gettin’ lucky, by all means smash that draft button!

The Padres are, yet again, being linked to a starting pitcher. This time it’s Masahiro Tanaka. I’ve never been much of a Tanaka fan, but I gotta say I’d be interested in a late flier if he found his way into the Dads’ rotation. He’s kind of a boring option, but he would probably go like 32-0 in SD. There’s some growing murmuring he’ll decide to go pitch in Japan, too, though. The ol’ wait and see, I suppose.

Marcell Ozuna‘s name popped up again this week – this time the Dodgers were mentioned as suitors. There are undoubtedly many suitors, but a team hot off a championship and with every single ingredient needed to be repeat favorites has to be top of the list. It’s still not 100% if NL DH will be a thing, but even if it isn’t, I’m sure the Dodgers would be happy to tell A.J. Pollock to kindly kick rocks in the dugout while Ozuna mans left field. I mean, I’d think so, at least. Maybe I’m wrong. Pollock certainly still has some spark in that bat (might surprise you to be reminded that he had 16 HR to Ozuna’s 18), but he’s not exactly a stellar defender either. Anyway, we’ll see, I guess!

Andrew Benintendi is on the trade block. I love, love, love Benny Baseball, and I blindly believe he’ll rebound and be a top-of-the-order staple on any squad EVER. But maybe that’s just the Razorback alumnus/fan in me. It is; I know it is, but I still feel it pure and true.

Marcus Semien finally getting some love! I mentioned back when I started all this offseason stuff that I was curious what the market would be like for him, given his *fire emoji* 2019 and *poop emoji* 2020 seasons. There’s a small chance he goes back to Oakland, but it’s looking much more like he lands with the Phillies, Reds, or Red Sox. The latter of whom would put him at second base, which would help his fantasy value. Boston still has a good lineup, too. That wouldn’t be a bad fit for fantasy purposes by any means.

Corey Kluber put on a little show for like every team in the league practically. Reports indicate he topped out at 90 MPH on the heater, though. You could probably expect a slight boost to that number as he ramps back up into game shape. His heater has always been low-90s anyway. I’m very cautiously meh on him at this point. I’m not bold enough to outright say he’s donezo, but I’m not overly interested in him either. His in his mid-30s with recent shoulder issues. The Yankees have expressed real interest, though, and that would help put him on my radar. But then again, the Tigers have been linked as well…Twitter is abuzz with talk he’ll be signed either by the time you’re reading this or by the next day.

Last little note I’ve got for yinz is some structural stuff: you can plan on having 7-inning doubleheaders again, as well as runners starting on second in extras. Not a fan of those things myself, and the fantasy world takes a little hit with fewer opportunities for players to produce on doubleheader days. The NL DH is still up in the air, and it’s sounding like if the union can get onboard with expanded playoffs, then the league will agree to keep the NL DH intact. Obvious fantasy implications if that many bats remain viable, so keep both ears on the ground for more word about that.

Kluber signed with NYY! They snuck that in after I had already submitted this here piece. Does that change anyone’s outlook? Not the easiest division to throw a ball in…

Kluber is now back with old pitching coach Matt Blake, if that’s worth anything. My only concern is he’s a slow starter (maybe due to the cold weather months) but overall believe this is a fantastic signing for the Yanks!

Could very well be worth something. There’s something to be said for familiarity and routine, so I imagine that will help for sure.

You know, the more I’ve thought about it this morning, I don’t quite hate the extra innings rule…it’s like overtime, and I can live with different rules in overtime. Like how NHL does 3v3. An expedited process, if you will.