Please see our player page for Brandon Bielak to see projections for today, the next 7 days and rest of season as well as stats and gamelogs designed with the fantasy baseball player in mind.

Holy rookie starters! I swear, there are more rookies debuting on the mound in 2020 than there are jokes about dongs on this site. After hearing much conversation about rookie starters and seeing some of the love-at-first-sight that is happening in some fantasy circles, it got me to thinking: of all the rookie starters out there, how do they all stack up from now through the rest of the season? Our very own everywhereblair has already been providing you with awesome updates to Razzball’s starting pitching rankings each week, but I thought I’d take it a step further as one of the prospect gurus and hone in on the first-year hurlers. These are solely rankings for the rest of the 2020 fantasy baseball season, although I plan to have updated dynasty rankings on these same names in the near future. Warning: my rankings do not directly translate to how everywhereblair has the top 100 starters ranked, therefore this article is not doctor approved.

Lucas Giolito was the first White Sox pitcher to get a no hitter and rack up ten-plus Ks, going 9 IP, 0 ER, 1 walk, 13 Ks, lowering his ERA to 3.09. And you didn’t think he was an ace that you should draft as your 1st starter! *screams at the heavens* REDEMPTION! Crap, I think I just hurt my back. Okay, the Pirates’ lineup was hilariously bad. They didn’t have one hitter with an OBP over .300. No need to bring in a defensive replacement for the White Sox outfield. Go ahead and put your glove away, DeWayne Wise. “Aw shucks.” That’s DeWayne. I turned the game on for the 9th, and I more just wanted to see a social distancing no-hitter celebration. Something akin to Don Larsen jumping into Yogi’s arms, and Yogi sidestepping him to put on a mask and Don skidding on his butt. But that wasn’t the case. We had our first good thing of 2020. Dot dot dot. Until Eloy Jimenez looked like he got hurt in the celebration. “You thought you’d get something nice?” That’s the year 2020 as it evilly cackles. You suck, 2020! Anyway, here’s what else I saw yesterday in fantasy baseball:

“Thinking about how I could’ve had Jose Abreu three rounds after Pete Alonso,” is what I tell the man in the plane after I say I want to parachute from the plane without a parachute. “You have anything that burns hotter than 500 degrees?” Is what I ask the grill store employee as I put charcoal briquettes down my pants as I watch Jose Abreu hit six homers in one series. “Just seeing if I can chew glass, that’s all,” which is what I say to Cougs as I bite into a water glass while thinking about El Grande Dolor hitting .322 and four home runs in a row from Saturday until Sunday. “No, I’m not cutting onions, I’m ripping my fingernails out,” which is what I say to my reflection when I think about how Jose Abreu has 11 homers and Pete Alonso hasn’t played in four days and was moved down the lineup for Dom Smith. How’s everyone else doing, that’s nice. Anyway, here’s what else I saw this weekend in fantasy baseball:

Are the Tigers king of summer streaming offerings? Are the Tigers eating their young or are they eating whatever is thrown in the dumpster behind the Costco? Should fantasy baseballers be singing Here Kitty Kitty to young Tigers or is Carole Baskin robbing us of our Baseball Nut? Is an actual ice cream flavor at Baskin-Robbins called Baseball Nut and does it have chestnut cream? All of these questions are going through my mind on this lovely mid-August day as the Tigers promote Tarik Skubal and Casey Mize. Every MLB team should look at how the Tigers deal with prospects and emulate. The Tigers throw them to the fire and it’s grrrrrrrrr…hey, this is fun after 13 years of Spanish couldn’t teach me how to roll my R’s….rrrrreat! On Prospect Itch’s Tigers fantasy prospects, he has Mize 1st and Skubal 3rd, but that’s from January, which is like another year ago. I wrote a Casey Mize fantasy, which is from another year ago. Both of these guys could be aces, and worth picking up, but neither may go very deep into games this year. So, in redraft? Prolly look at streaming Mize and Skubal, in that order, due to how long either can go in games. In dynasty leagues, Skubal is flat-out sexy, but in a Glasnow-type way. Could he go 4 IP, 3 ER and 10 Ks? Yes. Will he go 6 IP, 2 ER, 4 Ks and get you a bunch of Quality Starts? I don’t know about that yet on Skubal, but that might be Mize. So, I think Mize over Skubal for this year? Yes, I welcome your Sir Mize. Anyway, here’s what else I saw yesterday in fantasy baseball:

Taking a look back at last week’s predictions I had Randy Dobnak as my two-start pitcher of the week and although we haven’t seen his second start I like the results from his first game (5 IP, 1 ER, 3 Ks.) Sure we’d all like more K’s — but I even told you that in last week’s article. What?! You didn’t read last week’s article? Here: “You’d like to see more than a 4.8 K/9 — but take that liquid gold ratio and the guaranteed wins from the Twins.” Oh yea — he got the win too baby.

My deeper league two-start pitcher of the week was Tyler Mahle. Well, he made his first start and shutout the Indians over 6 innings allowing only 3 baserunners with 6 strikeouts. The Reds rewarded him by — removing him from the starting rotation for Wade Miley?! The same Wade Miley who has allowed 6 ERs in 3.1 IP so far this year? Yep, the very same!

This week I’m nominating Trevor Williams and Tyler Anderson as my two-start pitcher adds of the week. Hopefully, neither of them throws a complete game shutout only to be replaced by Francisco Liriano!

Being hearing a lot of gossip about Clint Frazier. That’s healthy. Ya know, some ginger tea. Don’t think the Yankees called Clint Frazier up just for make-up games, though this was overheard: “He’s not a clown?” Aaron Boone continued, “Oh, I thought he was for makeup games.” Then Boone laughed himself out of his mask. 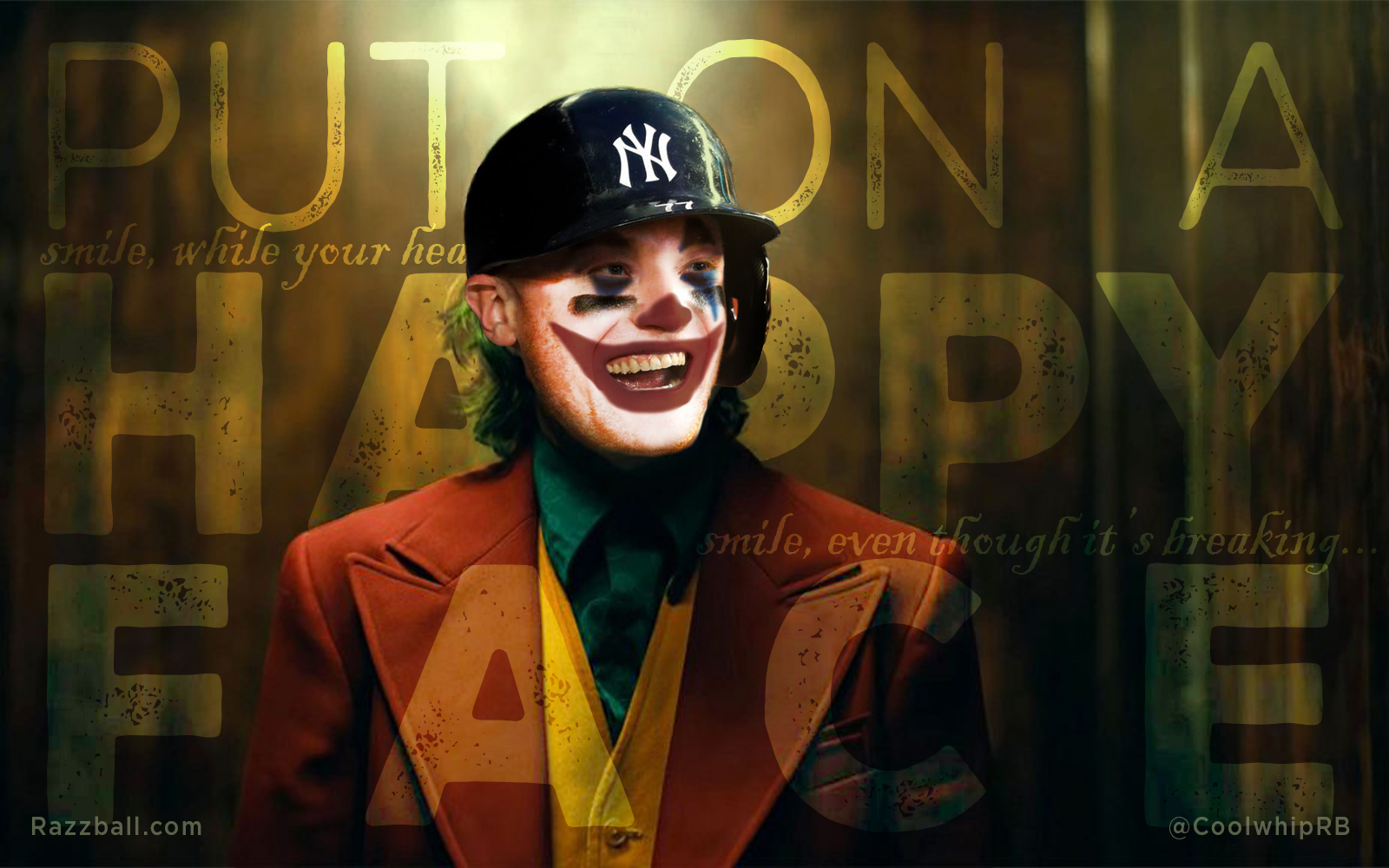 Artwork by our talented writer, CoolWhip.

So, Clint Frazier has struggled to get real playing time with the Yankees, but maybe he’s this year’s spark plug. He does look like he’s fire. He’s a 20-homer, 7-steal, .260 hitter over a 162 games, and that lineup is so great, I’d take a flyer on Frazier. Some might say, “Clint Frazier? I like Mike Tauchman!” Yeah, Tauchman’s projected for 3 HRs, 2 SBs and a .255 average, how can he not be owned?! Dude’s a 20-game hot streak away from one good Trevor Story game! Okay, I’m being unfair and underselling. Projections don’t love Tauchman, but if he gets everyday at-bats, he’s worth a look or whoever is in that lineup replacing Stanton, whether it’s Aaron Hicks, Mike Ford, Clint Frazier, or PTBYankee’dL. So, this is kind of a Yankees’ placeholder in lineup endorsement, but Clint Frazier is the most interesting. Plus, *pinkie up as I sip* ginger tea. Anyway, here’s some more players to Buy or Sell this week in fantasy baseball:

Not that long ago, I remember hearing a story. One I will recount for you here, but you can’t tell anyone else. Promise? Okay, there was this guy Brandon Bielak, and he was real into attachment parenting and had to put up with his stupid father, Nick, and dopey brothers, Tony and Joey Lawrence — Whoa. Well, the Teen Beat on, and I’m reading this from an old TV Guide with Miss Piggy on the cover, can you tell? Brandon Bielak is an enigma. Nothing exists on him, besides Matt Roush’s blurbs. Confession Alert! I used to collect TV Guides. What an absolute nerd. Any hoo! Bielak was found on waivers by me (or was it in an abandoned refrigerator — wait, wrong show), and he went 5 IP, 2 ER, 7 baserunners, 4 Ks, ERA at 1.76. He works with a 94 MPH fastball, and a ton of secondary pitches with the curve hooking hard, and looking especially nice. He’s very serviceable, bordering on more. He could be a back-end fantasy starter for years to come. Now, I’ve streamed this guy a few times, and Streamonator thinks Bielak next start is even better — with no Big Bang in sight. Anyway, here’s what else I saw yesterday in fantasy baseball:

Another week of Major League Baseball and another week of COVID-19 related stories. We recorded this yesterday evening about an hour before the Mike Clevinger news drops so we just focus on Zach Plesac and the cancellation of the Cardinals games in the early part of the week. We then spend some time discussing wavier wire adds of note over the last few days and what our long term perspective is on them. It’s a packed show of 2020 shart season analysis. Yes, you read that right, it’s a shart season because it’s a mess and has no shape other than brown water.

After a mediocre opening week, I’m pretty happy with the results for last week. Alec Mills and Zach Plesac were great as our two-start streamers and guys like Michael Wacha, David Peterson and Christian Javier were solid too. The COVID craziness from last week is about to wreak havoc on the rest of the season though, with St. Louis likely missing more games. There are so many doubleheaders this week and it’s hard to even grasp what these rotations will look like and when people will pitch. I do have a decent idea right now though and I’ll do my best to provide you with some great streamers to ride the wave this week!

Surprised Dylan Bundy is breaking out, said no one because literally everyone said exactly that when he was traded to the Angels. Okay, maybe the O’s are surprised, but I have a feeling even they knew it was coming. They just like losing, right? “We like to be owned by the good teams.” That’s the O’s front office. Even the Pirates are like, “Damn, for Bundy, we would’ve traded you Tyler Glasnow, Austin Meadows and…well, we don’t have anyone else. You want Colin Moran?” So, Dylan Bundy was masterful yesterday, going 9 IP, 1 ER, 4 baserunners, 10 Ks, lowering his ERA to 2.08. He has changed his pitch mix in a dramatic way. Leaning way more on a slider and easing off his fastball, that has been become increasingly bleh in velocity. His command and Ks have been outstanding, but, I’ll be honest, I’m not 100% sold. Don’t get me wrong, I can be sold. I’m not saying it’s a mirage, go buy some more tigers, Steve Wynn. I’m just saying it’s 21 2/3 IP in three starts. Oh, I’d own him in 100% of leagues, but decreased velocity makes me want to see more. Promising vs. Promise Land. Me like vs. Me likey. Yummo vs. Gummo is a masterpiece. Anyway, here’s what else I saw yesterday in fantasy baseball: