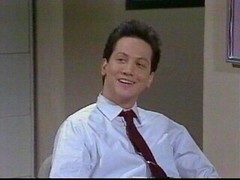 When you think about Rob Schneider’s career, his Richmeister character was bordering on prophetic.  I mean, the first time we saw the character, ok, that was fun.  Annoying and yet you get the gist of it why it’s funny and it was in a small enough sample size for you to actually enjoy it and not be frustrated.  And then they kept doing the skit over and over and making the skits longer and longer.  The reason it was funny was that you get it, the dude is annoying.  But is it really funny annoying your audience?  Not really.  I mean, who the eff watched Deuce Bigalow?  Wait, don’t answer that, especially with a ‘yes’ cuz I want us to stay friends.  Basically, Rob Schneider in small doses can work (YOU CAN DO IT!) but if you have to deal with him for longer than five minutes, you’re basically trying to annoy your audience to death.  Speaking of annoying your audience to death, there’s me not talking about Luis Severino.  Let’s fix that, shall we?  Severino’s first start of the year wasn’t perfect but it was spectacular as he K’d 7 through 5 and only gave up 2 hits, though those two hits were smacked pretty hard and one left the yard.  But said hits were in Yankees stadium and by lefties in a lefty friendly park.  Progressive Field still plays well to lefties but it pales in comparison to that Bronx short porch.  And though I wouldn’t call that offense lost at sea entirely, it is made up of guys still learning the game and castaways at this point as they shed payroll and try to build for 2016.  Meanwhile, New York is still playing for something and Severino looked so good his first time out, I’m hard pressed not to go back to him on a day where he may go underowned because of all the other higher priced pitchers.  So join me in rostering the Sevman…the Sevmeister…the Severino, won’t you?  Meanwhile, Schneider looks forward to reprising his cameo roles in another Adam Sandler movie.  My hatred there is for another time cuz it’s time we move on to some other calls.  So here’s my red hot chick takes for this Tuesday DK slate…

New to DraftKings? Scared of feeling like a small fish in a big pond? Well try out this 10 teamer of Razzball writers and friends to wet your DK whistle. Just remember to sign up through us before you do. It’s how we know you care! If you still feel helpless and lonely, be sure to subscribe to the DFSBot for your daily baseball plays.

Matt Harvey, SP: $10,900 – Of all the aces we have on the mound today, I’m gonna sit over here and enjoy my #HarveyDay.  As I alluded to in yesterday’s write up, the Rockies are bad on the road.  Niese dropped a 22 spot on them and Harvey has the upside to potentially double that.  He’ll be my SP1 without looking back in cash games and may still play into my tourney lineups as well.

Taijuan Walker, SP: $8,400 – Don’t let the DK numbers from his last outing fool you; Walker shut down the Rockies in Coors in his last start.  If it weren’t for a misplayed ball that turned into a ‘double’ and not an error as well as a blown save, you’d be talking about closer to 25 points or more rather than the 15 he ended up with.  Factor in the Orioles owning the 3rd worst K% against righties and the Safeco park bump and you’ll want to learn Taijuan-ese.

Chris Tillman, SP: $6,500 – On the other side of this matchup is a pitcher with some massive reverse splits who probably faces 6 lefties from this Mariners lineup.  You won’t get many K’s but when Tillman is going right, you’re looking at getting a long outing out of him which is more than my wife can say about me.

Jeff Locke, SP: $6,200 – He’s not the talent you usually want to attack a weakness with but the Cardinals have the 4th worst K% in the league and own a measly 87 wRC+ against LHP as well.  I wouldn’t expect more than 18 points here so consider this a punt play while you’re paying up for bats.

Drew Hutchison, SP: $5,700 – It wasn’t the best of outings for Hutch last time out but I still believe in his obscene home/road splits.  Getting an Athletics lineup that has the 3rd worst wRC+ since the break should put him back on track.  Hutch’s ceiling is similarly capped like Locke’s so you’re looking to build a monster batting roster.

Welington Castillo, C: $3,700 – Yes, I’m going back to the Welington with this call from yesterday and why not?  The price went up a measly $100 after dropping a 30 burger last night and he gets just as bad of a pitcher on the mound tonight.

John Jaso, C: $3,300 – Catchers who aren’t catchers are my most favoritest catchers.  Jaso bats lead off most nights against righties and is a great cash game play.

Adam Lind, 1B: $4,100 – Haren’s season long numbers looked really nice playing for Miami but expect them to slowly get ground down as his lefty splits get more and more exposed in hitter neutral or friendly parks.  Haren has a 2.30 HR/9 against left-handed bats.  Make sure to check the weather and see if maybe the wind is blowing out but a slightly sneaky mini-stack today could be Shane Peterson and Scooter Gennett.

Ryan Howard, 1B: $4,000 – Howard was a surprise no go yesterday against Rubby but gets a similarly solid matchup tonight in Hellickson whose splits against lefties is dreadful in its own right.  So if you’re into prostitutes with a dry, mocking sense of humor, roll with Ry-Ho today.

Jose Altuve, 2B: $4,100 – The adage is ‘Altuve isn’t hitting lefties like he did last year’ this season and people are absolutely right.  He hit .419 against them last year.  This  year?  A paltry .358…yeah, Altuve could be underowned in a matchup against MadBum and I for one accept this challenge even with those ‘crappy’ numbers against southpaws.

Wilmer Flores, 2B/SS: $3,400 – On the year, Flores owns a .233 ISO and a 137 wRC+ against lefties and will probably get a favorable lineup spot for the Mets who have struggled against lefties most of the year.  Let’s just hope they don’t try to trade him mid-game again…

Jake Lamb, 3B: $3,600 – Second Dback suggested and last in terms of getting their own personal writeup.  You don’t need me to tell you an Arizona stack against a guy with a 7+ ERA is a good idea.  Paul Goldschmidt, A.J. Pollock, the bat boy…yeah, they’re all in play.

Danny Valencia, 3B/OF: $3,400 – He’s been batting cleanup since moving to Oakland and has been the lone bright spot offensively for them of late.  Whether or not you roster Hutch, Valencia gets a park bump and has been hitting for power.  Oh and fine, there’s narrative street of exacting revenge on the team that DFA’d him and but still kept Chris Colabello around.  That’s gotta sting.

Troy Tulowitzki, SS: $4,300 – If you’re paying up at SS, you go Troy.  Rogers Centre gives right handers a good time which sounds like baseball nerd scrawlings on a bathroom stall but it’s just true.  I’ll pay up when and where I can to get in on these Blue Jays bats.

Jose Ramirez, 2B/SS: $3,100 – Cash game play.  Ramirez has hit well since being called back up and has batted lead off.  It doesn’t take much at this price to pay you back.

Mike Trout, OF: $5,300 – Carlos Rodon will be good some day.  Today?  Not so much…I’m not sure I’m full on stacking the Angels but I’ll take the big bat as a chance to talk about having no shame in taking some LAA bats today.

Avisail Garcia, OF: $3,800 – Points chaser, you say.  Nah, I just know some power bats get into a groove and it’s hard to get them back out of it.  In nine August games, Garcia has 4 HRs.  Maybe it’s just a blip on the radar but at this price, I’m fine with finding out.

Sigh, don’t the Baseball Gods know raining on #HarveyDay shouldn’t be possible?  There’s chances of heavy rains for the NYMvsCOL game so if you’re looking Harvey’s way today, make sure you keep abreast of the situa…sorry, now I’m thinking about boobs.  Gotta stop using that word.  For the rest of the slate, things are either dry or have these amazing retracting roof thingies that prevent rain from stopping your game.  Crazy, I know.

No surprise, Harvey and the Mets sit as the biggest favorite on the day at -240 but outside of that, some intrigue.  We have Hutchison sitting at -200 in the TORvsOAK tilt so at the very least, he should be able to get 4 points today…if he goes 5 innings, of course…meanwhile, Erasmo Ramirez and the Rays have a heavy -190 line against a broken Braves club.  Ramirez just doesn’t K enough guys nor go deep enough into games to spark my interest today or I’d be all in.  I know Scott Kazmir is a worthy pitcher but SF only has a -136 advantage at home?  Something is rotten about that line and pushes me off the MadBum unless said MadBum is attached to Olivia Munn then of course I’M NEVER LETTING GO.  Meanwhile, Greinke is a good favorite at home today at -175.  I didn’t mention Joe Ross but given the o/u is a mere 6.5, I could get behind rolling with him today as many could be off him going against a team that doesn’t K much.  Your highest o/u on the day is 9 and can be found in the desert for the ARIvsPHI tilt.  The TORvsOAK game has seen a .5 shaving and is down to 8.5.  If Hutch stays a heavy favorite and the run totals are slipping down, hrm…me likey.  Another game that shaved a half run is CLEvsNYY from 7.5 to 7.  I didn’t talk about Carrasco but the game is essentially a pick’em and he could be just as viable as Severino today.  Just not sure the Ks will be there.