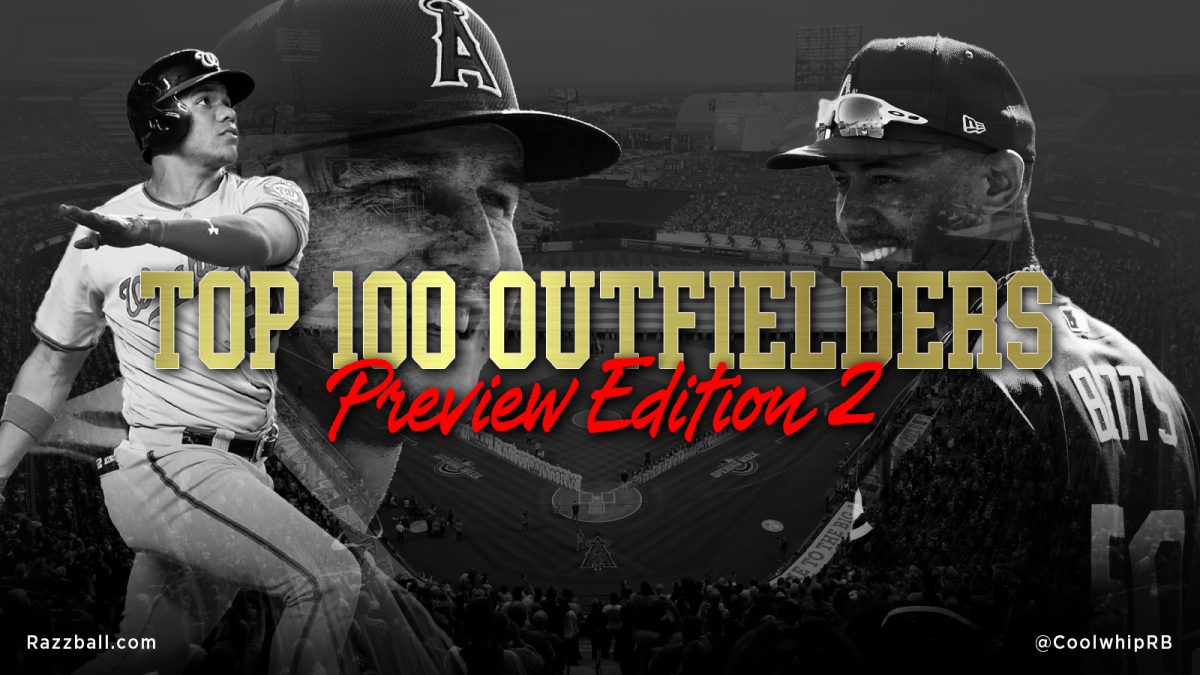 Okay now that I got that load of laundry out of the way (we discussed per game values here), we can go back… to the future! Looking ahead to this season and what lies before us. How can it be ahead and before? Don’t ask me, English is a tortured and butchered language that is an amalgamation of West German, Norman, Saxon, and broken Latin. Nothing makes sense. But I’m sure you didn’t come here to hear me rant about linguistics, you are here for outfielders, and of those we have plenty.

The outfield is a position that is easy to punt in the earlier rounds as there are so many, even 4 of the top 5 bats in the game are outfielders, if you take one of them it is isn’t hard to move on and address other areas of need before going back in. However, in some leagues you will need to roster five at a time so you mustn’t wait too long; but, there are plenty of solid options after pick 100. Without further ado, let’s dive in.

A bit of a forward, we all know the elite bats are elite. Let’s spend some time calling out the good values in the middle of the draft. Starting in the 80s going to pick 200ish. This is where you can make some money.

Lourdes Gurriel Jr. – If you decide to punt grabbing OFs in the early draft or say you start with Acuna, etc? You could wait until about here to take your second OF. Gurriel is also not a bad place to grab your first if you build up other positions earlier. He is thissss close to being a 30/10/.280 hitter and available after pick 80.

Wil Myers – I covered him at length here. Big upside. Much wow.

Ramon Laureano – Grey has him projected for 25/13/.267. Yesterday, in the spring training game, Oakland had him batting from the leadoff spot. Also in an interview, he said he was talking about steal technique with Andrus. The same Andrus that stole 31 bags in 2019. Now, I’m not saying Laureano will swipe 30+ bags. Nope. But I’m not, not saying it will help him either.

Ian Happ – Very underrated. For a large part of last season, Happ was in the top 100 on the player rater. Happ. can. rake. And he too is likely to be leading off this season. I point out a lot of these leadoff hitters because they will be getting the reps. Opportunity is the key success, and the most opportunity comes with the most at-bats. In the leadoff spot. As for Happ specifically, he too could flirt with a 30/10 season but it comes with a .250 average. If you take advantage of the early draft grabbing elite bats that hit .280+, when you get to the middle rounds it frees you up to take shots on these guys who can get you the big power numbers with lower contact… but it won’t hurt you in the end because you prepared for it earlier.

Nick Solak – He will be mostly owned/deployed as a 2B. But he also comes with OF eligibility. So here we are. He is a nice upside play that can get you 15/15+ with a couple of loud noises short of 20 and a .265+ average. Also, throughout the season he might pick up some positions along the way.

Raimel Tapia – So you forgot to stock up on steals earlier in the draft? Tapia has got you covered. For as late as he will be available, he won’t hurt you in average (thanks Coors) and he can possibly net you 20+ Steals. And Bud Black will likely play him more than Hampson; because, reasons.

Kyle Tucker – Listen, he is great, grand, wonderful. I don’t want to put him here, but the latest drafting craze has him often leaving the board before pick 30. Calm down, everyone. right now I have for something in the realm of 25/22/.265, which is simply not second-round material. Yes, he’s not an OF, but Bo Bichette is basically that plus about 25 points on average, you are giving away value in the second round.

Whit Merrifield – I’ve heard the arguments. Counterpoint: He’s a 3-category producer. Runs, Steals, Average. Everything else is pretty meh. You don’t need to pay a premium for someone who won’t be an asset in all 5 cats.

Byron Buxton – I know it’s tempting. He’s been a 20/20 tease for all his career so far. He just can’t stay on the field. Let it go, draft someone else this time. You are hard enough on yourself, don’t let him be hard on you too. We all had a rough 2020, let’s start the 2021 season with a little less stress, mmkay? He may have flashed a little talent last season but it was mostly smoke and mirrors.

Joc Peterson – He is wildly cheap in drafts right now. His average isn’t going to wow you but he looks primed to be a 30 HR bat that’s basically free in all drafts and I wrote about him at length here. Also, I was learning to speak whale (mostly unrelated).

Kyle Lewis – Grey is all in on him while I’m not quite sure what to make of him. I kinda really like him for the price, while at the same time thinking about Wil Myers, etc above. In the first 30 games, he hit .368 and then hit .150 in the second set. Could he have bounced back in the next 30? Sure. But we didn’t have the next 30 so I don’t know what to tell you. I have 1 share of him myself in bestball, but outside of that, I think I’d prefer to roll with someone else in the pick 120-140 range. I’d prefer if he fell into the 160-180 range.

Charlie Blackmon – Every draft so far he’s been the forgotten man. Am I missing something? He was leading the way for the batting title not that long ago and always been a 5-cat guy, though the steals have waned some as of late. Right now you can get him super cheap so now’s the time to strike while the black pot is hot.