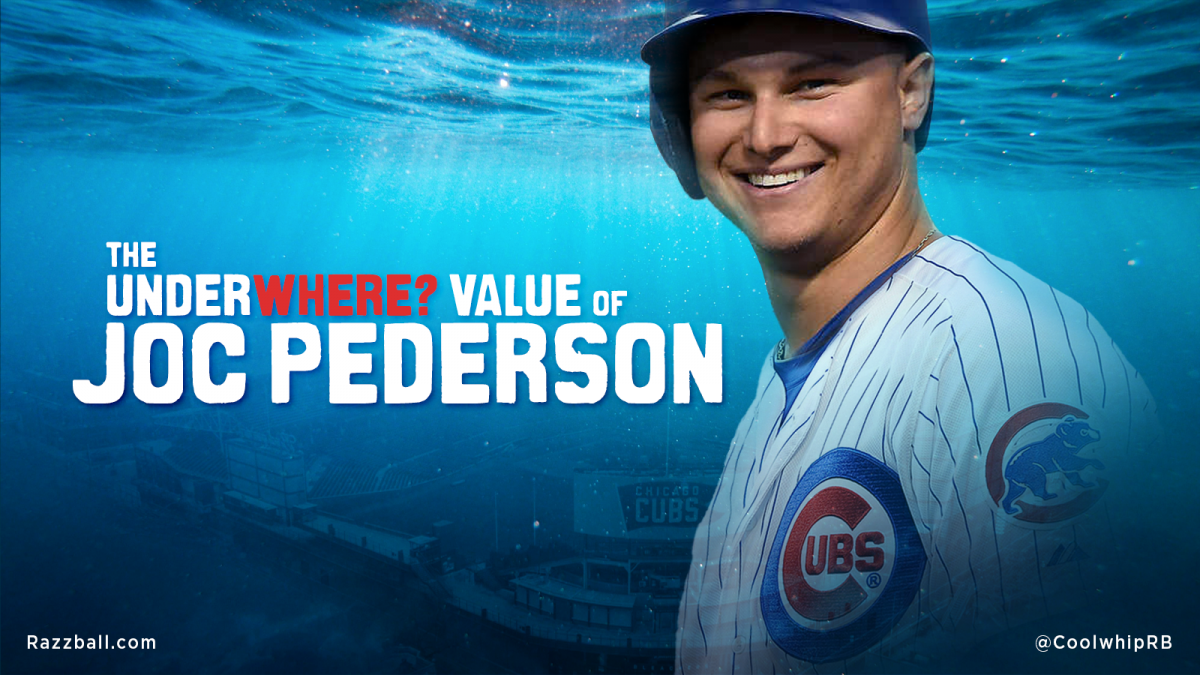 *Read with a French accent* One common thing I have seen in early drafts has been players who had a rough 2020 season, despite consistent track records prior, are being heavily undervalued. In this sea of deep discounts, one can find bats that the world of drafters has forgotten and left behind. One bat, perhaps forgotten the most is Joc Pederson. Pederson is a known quantity, a 30-HR power hitter from the left side that thrives on the offerings of unsuspecting righty pitchers. Though same-handed pitchers have always given him trouble, he has been quite dangerous to righties. Come with me as we dive down into the underlying numbers and statistics to see what happened to Joc last year, and what we can expect for him this year.

Last few seasons, HR/AB, so much for that 30 sb season in the minors, the steals are but a distant memory now. In 2018 he hit a home run once every 15.8 ABs and in 2019 once every 12.5 ABs. It looks like 2019 might have been a career year for him (thanks helium balls), so it’s hard to see that coming back especially now after hearing that the balls are going to be deadened down again. Manfred! Stop playing with your balls! The performance level of 2018 is repeatable as he could follow similar rates with more ABs. 2020 was very poor as his AVG tanked and so did his SLG; let’s dig into why.

So under the numbers, last season looks to be mostly a bad BABIP mirage with a slightly elevated K-rate. The xStats tend to point to him being exactly the guy we already knew and loved.

Flyball rate went down a bit, but his home run rate still held its ground with his overall exit velocity trending up with his hard-hit rate. Though maxEV was down a tick, last season Joc was finished 10th in avgEV (92.9 mph) just ahead of Devers and Ozuna. Also, his EV+ (my term) on line drives and flyballs was 98.1 mph, good for 9th just ahead of Cruz and Soler. He’s still hitting the ball with authority when he elevates it.

This leads us to the question, both literal and metaphorical, did he just pound more sand with the dip in his average launch angle? Yes, he did. His GB/FB rate went from his usual ~1.0 to an uncharacteristic 1.30, if there’s anything to be wary of for this year it’s watching to see if that trend continues. I believe it won’t due to the fluky season and small sample since the majority of his other underlying numbers still fell close to career norms. I believe these will rebound in 2021 over a full season of ABs.

Looking at his plate discipline, his swing profile stayed right around his 2019 numbers, the only difference was the drop in contact especially on pitches outside the zone leading to that 13.5% swinging-strike rate. This was true for many hitters in 2020. Whether you take stock in the lack of film available to players and the lack of training/preparation will determine if you believe this is a problem lurking beneath the waters or give him a mulligan for 2020. For Joc, I’m leaning towards the latter due to his weird splits.

Splits are the name of the game with Joc Pederson. He’s the very model of a modern major league platoon hitter. He’s a lefty power bat that crushes righties. And does much less crushing versus lefties. Last year was weird, to say the least. His splits with an extremely small sample (only 9 ABs vs LHP) completely flipped. That will not continue into 2021. With Joc signing on with the Cubs… He effectively replaces Schwarber in that lineup with an open path to a full-time gig in LF. And when you look at their 2019 (hat tip to our new writer, Torres):

Both were career years. Which one is Schwarber and which one is Pederson? In many ways, they are the same. *Insert Spider-Man GIF* Cubs just replaced Schwarber with imitation Schwarber for $3.0M less. One thing that is extremely convenient for the new Cub is his division has a very pronounced lack of LHP:

You don’t say, Rudy? hmmm. The few that are there, aren’t exactly striking fear into the hearts of men, or for that matter, striking out many men. Do we really expect Lauer to hold that 5th starter position all season long? I think not, and if he does, it’s probably going to be bad. In NFC, Schwarber’s ADP is 195.2, and Pederson’s is 374.2, is there really 180 picks of difference between them? No. In fact, I tend to think that after the team shuffle, Joc’s in a bit better situation. The pitching competition in the NL Central will be substantially worse including only 4 LHP (with 8 opposing in the East) which will neutralize some of the lineup advantage Schwarber has on the Nats. Plus the park factors in the NL Central are more favorable to hitters than the NL East.

Great piece Coolwhip. As a Cubs fan, I follow the team closely. After the signing, management said that the plan is to give Joc the chance of playing everyday and NOT platoon him. That may change if he is awful against lefties but he will get the opportunity for full ABs.

HC, thanks for reading! Yes, exactly! A full season of ABs is basically a guaranteed 30 HRs. They might let him hit the bad lefties, so Kim might the only on in division he gets spelled on. Could be used off the bench in those starts in double switches etc. Either way I like the potential playing time. I hope Grandpa Rossy frees him.

The short answer is yes, in daily leagues they have more value than weekly. In weekly leagues you have to look at probable opp SPs for the week and see how many starts they are likely to get, so their value takes a hit.

Usually the only platooners you want are strong-side hitters like Joc (who face mostly righties) as that’s the majority of opponents and is really true this year has his division is mostly void of challenging lefty starters. The Cubs roster is also very shallow. On the Dodgers he was platooned every single chance because they had a wealth of bench depth (and still do). The Cubs no longer have that, so the ABs are mostly his to claim.

Many thanks for your reply. Very much appreciated.

Coolwhip, or CW, whichever you like to be called, I think you’re onto something here.

This is really nice work. I’m impressed. And I agree with your analysis and conclusion. Good work pal!!

Hey Harley, thanks for reading! Yeah the cost is basically free, so why not.

This is really nice work, Coolwhip. I was so uninterested in Joc that I almost did not bother to summon the energy to lift my finger to click the “Please, blog, may I have some more?” button, and now I’m eyeing him up as a target for my bench. Especially love the pitching matchup info – the Cubs could still acquire someone as a platoon partner for him, but not too big a worry if it would be a 90%+/less than 10% split anyway.

What kind of a defender is he? Is he a candidate to get pulled from games to protect leads?

Heya Len! Thanks for reading. He’s become above average in the outfield so he won’t get replaced out there, but pretty awful at first base if he is ever given innings there, but they’d prob just move him to OF in late innings.

Coolwhip
Author
Reply to  Will

ah yes. Ervin. Well, does anyone really want to give him 100 ABs? I don’t think so, haha. He might a few looks.