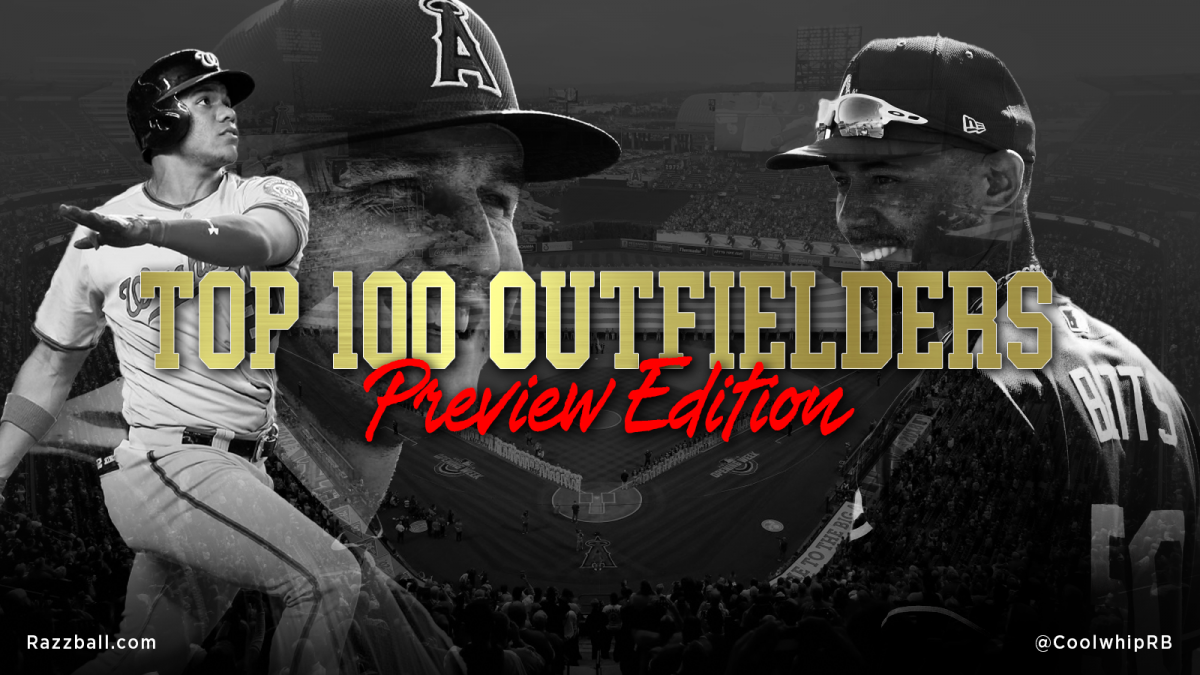 Welcome back for another season of Coolwhip in the Outfield. This preview edition is meant to be a review of what has happened. There’s a lot of players, especially outfielders where their past track record has been forgotten in lieu of what happened in just the 60 games during a pandemic. Let’s not be too hasty here… A lot of things happened that spoiled the sample, and a lot of things didn’t happen that would have been beneficial. So as it tends to be my theme, let’s look at the context.

What we will look at today is the top 100 outfielders based on the last 162 games scheduled. There are zero projections in this post. Again, ZERO projections, no preseason rankings (yet), I want us to focus on the track record first and take note. Specifically, here we will look at the value provided based on the last “season” played. My rankings here are ultimately who gave the most value on a per-game basis from mid-2019 through the short season of 2020. To you early drafters, hopefully, this aids your choice of late-round picks mining for potential value (*cough* RazzSlam *cough*).

Ronald Acuna Jr. – Despite missing 14 games he’s on the top of the list in total Roll$ and per game $, and it’s not close. That’s why Tildaddy is the daddy. He buys everyone ice cream cones.

Yordan Alvarez – Yes in most places he’s not an OF this year, but his value begs me to mention it. Going through a goofy season that he missed almost all of, I think we’ve forgotten just how good he was in 2019. On a per-game basis (in those few leagues where he still has OF eligibility), Yordong was on par with Juan Soto. He’s like Diet Soto. It’s the sweet one.

George Springer – What this tells you is that after the big names are off the board, meaning, if you don’t get an OF in the 1st round (Acuna through Yelich/Belli), you might want to wait and grab Springer as your first OF and address other more shallow positions first. No, that does not mean catcher.

Luis Robert – Despite his struggles last year once the league caught on, he was still a very valuable commodity for the season. Imagine if he actually adjusts. Imagine if he hits .260+. I like to imagine those things. I really like him in best ball, and if the price is right, I’m willing to take the risk for a 30/30 skillset in other leagues too.

Jon Berti – He has been really really great when he plays. Miami just seems very content to not give him full ABs. But where he’s going in ADP, he presents a nice option in best balls and a flier in others in case he does get his number called for some sweet SAGNOF action.

Wil Myers – So, there will be many players in the bottom half of this list that you might not expect to be there, Myers being one of them. The reason being, 2017-2108 were pretty good, but his 2019 season was very… how you say… meh. So the cumulative effect is that the good is offset by the bad. As I wrote in my Wil Myers post here, I have faith in the changes we saw him make in 2020, the good, and you will see him much higher once we account for projections.

Oscar Mercado – Another on the list, but unexpected in a different way. Last season he came up short in royal fashion. The reason he is even as high as he is being how good he was in 2019. This was a painful miss for my rankings last season as he never was able to shake the demons. Can he rebound now in 2020? I sure hope so, but I’ll be watching him from the waiver wire, not on my roster to start the year.

David Dahl – When Dahl is on the field, he’s pretty good. He’s just not always on the field. And now, he’s not in Coors. Could there be some cheap end of draft best ball value here? Perhaps. I could also be a world-renowned lyricist, but the distance between here and there could dig a tunnel to China. But, that would be foolish because everyone knows you’d burn up in the earth’s core like the mole version of Icarus. That’s David Dahl.

Franchy Cordero – Super small sample. Let’s play “That’s So Grisham,” the game show where we try to find the outfielder after pick 200 most likely to finish in the top 100. The leader in the clubhouse for me is Le Agneau. 70/70 grade raw power and speed is just waiting to be unleashed and a 20/20 (though likely more 20/15) season could be in the realm of possibilities (as could be a .235 average). But this late in the draft, it’s not too baaaad. Especially now with trade to Boston, his left-side bat is going to play up leaving behind Kaufman Stadium. Albeit an extremely small sample, contact in his last 50+ ABs has been roughly 90% to pull-side and center… So let the pole dancing at Pesky’s commence!

Leody Taveras – Super small sample. Next up on “That’s So Grisham” is Leody. His raw skills aren’t nearly as impressive, but he has a higher chance at reaching the 20 steal mark. With more base-stealing experience and less power, he is likely the reverse Cordero in the 15/20 range.

Alex Kirilloff – Yes, he’s not on this list at all, but it’s my article and I want to bring him up. haha. As of right now he’s the Twins starter replacing Eddie Rosario. It says a lot when an organization debuts a player in the playoffs when their backs are against the wall. It also says something (maybe more about money) when they let one of the most consistent power hitters walk despite him being relatively inexpensive. Kirilloff in that lineup is a great pickup for your 5th OF at cost. Right now drafts don’t seem to be treating him like he’ll get starter ABs. He looks primed to be a doubles machine, like In-N-Out. And with doubles in his name, I shall dub him “Animal Style.”