I’m going to share a Missed Connection posting with you that I’ve been working on; let me know if there’s anything you’d change.  “Hello, Ginger.  I saw you at a Wetzel’s Pretzels in Roosevelt Field on Saturday.  I don’t know if Ginger is your name, but your hair was the color of a carrot.  Not a carrot’s top, that’s green.  I don’t know why people say that’s orange.  You looked off the scale on the crazy/hot ratio.  Your arm freckles looked like God spilled Sunny D on you.  One blonde child turned the corner, saw you and immediately started crying.  Does any of this ring a bell?  At one point, you stepped into a sliver of sunlight and starting screaming, ‘I’m burning!’  You were wearing a New York Yankees jersey with the name Frazier on the back.  If this sounds like you, please contact me.  I need an outfielder.”  How’s that?  Do you think I could get myself a 5th outfielder with that?  So, Clint Frazier finds himself in an everyday job with the Yankees.  How long he lasts is up to Giancarlo, Hicks and Gardner’s health, but I’d own Frazier everywhere to see if he can finally tap that speed/power combo.  Speaking of which, he kinda looks like Pizza Combos.  Anyway, here’s some more players to Buy or Sell this week in fantasy baseball:

Willians Astudillo – I was thinking the other day — I think, y’all! — the Twins’ lineup is not bad, Astudillo was hitting third, and, here comes the clincher, it made sense.  In one two-catcher league, I drafted Astudillo around 350th overall, and he could be on his way to a top seven catcher year.  (Of course, too bad I also own in that league Clevinger, J.A. Happ, Ian Happ, every Happ apparently, and more schmohawks.)

Daniel Vogelbach – Did you know olive oil is the urine of fat cherubs?  It is true.  So when you think about how Vogelbach drinks olive oil, it’s kinda like fat angels are peeing into his mouth.  And you thought you wouldn’t learn anything today.  Another small piece of trivia, when Vogelbach first met Kikuchi, he told him that when Vogelbach was a kid, people would call him Chow Yun-Fat.  Then Kikuchi told him how he made a fortune investing in Fruit-by-the-foot in the 90’s and a friendship was born.  To read more about my Daniel Vogelbach fantasy.

Mitch Moreland – The other day I was napping at my computer and my head accidentally picked up Moreland.  Since he’s got four homers and hitting cleanup, well done, resting Mitch face!

Rowdy Tellez – When people are acting Rowdy, they could be rioting, and you can’t spell patriotic without riot, so what is more patriotic than picking up this Canadian 1st baseman?  Okay, besides kneeling for LMFAO’s Party Anthem.

Hunter Dozier – This morning a commenter, Vash, pointed out to me Dozier’s exit velocity in the early going, and that led me on a 20-minute crusade through my contacts, such as Podcast Ralph, Donkey Teeth and a Royals blogger, to see if there’s anything to Dozier.  Two were optimistic and one said “hot schmotato.”  Dozier sticks out at the top of exit velocity charts, but has that stabilized fully?  I don’t know.  I added Dozier in one deeper mixed league, and own him in another, so two out of ten shares so far.  Right above the fantasy Mendoza line.

Tyler Austin – Here’s what I said the other day, “Austin was a preseason favorite of mine who was squeezed for playing time (in Minnesota).  If he gets an everyday job in San Fran, he could sneak into 20+ homers.” And that’s me quoting me!  TA in SF does seem antithetical to what we know, but here we are.

Niko Goodrum – Was watching Eat Pray Love the other night, while sipping on my 40-Year-Old Virgin Daiquiri and thought to myself, “This could use some Goodrum.”  And so could your fantasy team. (Yo, if you can find fantasy baseball advice this good anywhere else, good luck!)

Chad Pinder – Admittedly, not a huge fan of Pinder, feels too aggressive in this era of #metoo, but I’m gonna slip on my artisanal wool robe and give him a shot while he’s hot.

Brandon Lowe – Was in a Lowe’s the other day, and thought about how you can’t break a ruler, you can only make it shorter, and *makes head exploding hand gesture*  I mean, dubya tee eff, rulers?

Rio Ruiz – Swear to you, I didn’t think we’d ever get through the 1st basemen to pick up this week.  My fingers are sore.  Cougs, bring me my knuckles ice pack!  Merci bootcamp!  As for Ruiz, he’s garbage, but outside of 1st basemen, there weren’t a ton of corner infidels to sidle up to the Buy. (If you say the end in a Bahston accent, it makes more sense.)

Freddy Galvis – Holy Castle Woofiestein, shortstops are bad this week.  They’ll get better, but Galvis is the hottest at the adjacent to the hot corner.

Jesse Winker – There might not be a hotter bat right now.  *Cody Bellinger clears his throat*  Not now, Cody.  *Jay Bruce clears his throat*  Okay, okay!  There’s other hot bats, but Winker is a .290 hitter and starting to come out of his huge ten-day slump to start the season.

Jason Heyward – He’s going to be a top 40 outfielder or a bottom five outfielder, I can’t envision any other scenario.

Leonys Martin – I do like Leonys, but I was watching him get caught stealing the other day — by about five feet — and, well, My Favorite Martin got old.

Ramon Laureano – Why is he unowned in 50% of leagues?  Do you want to hurt me?

Max Fried – I was very impressed with Fried the other day, more impressed with him than myself in finding a replacement for the modifier ‘very.’  Could see the paper, rock, scissors decision of Fried, Woodbarf, FP Saintdamnvelo, all the Marlins starters, Emilio Estevez and more young guns and, brucely, I don’t know which way I’d go.  Lots of coin flips on matchups, but I like Fried a lot.

Merrill Kelly – This is a Streamonator call, like the call it makes to Elon Musk’s office to see if he can make it a robot friend.  Streamonator so lonely!

Vince Velasquez – This is also a Streamonator call.  “Can you have Elon call me back?  I just want a friend to watch TV with me.”

Ryan Brasier – Could be the Sawx closer, or will at least share the job, so, ya know, get more saves than 70% of other closers, and, somehow, he’s on waivers in almost 80% of leagues.  Are you afraid if you pick up Brasier, you’re gonna have to make him breakfast the next day?

Anthony Swarzak – The M’s closer until Strickland returns is almost assuredly Swarzak, and it did him no harm that the M’s tried Roenis Elias and, while Elias is good with sports trivia, he did not look like a closer.

Richard Lovelady – In skywriting, “Big Dick Lovelady for President….” Trailing off for miles, finally, “…or closer in KC.”

Yoan Moncada – Yes, I’m double-dipping on the Anime Grey’s info, just in case you’re not paying attention to my more animated self.  Moncada’s numbers do not look good.  I know, I know, it seems like the breakout is finally here.  Except no.  He’s 23rd for smacking the shizz out of fastballs with a 4+ runs above average.  That’s good.  He’s hitting fastballs.  He’s -5 on split-fingers, which is different than your Cousin Kevin who had a propeller mishap.  He’s -4.7 on cutters and under 1 on sliders and curves.  I suppose Moncada can wait for Meatball City in every count, and be successful, but he can’t be a .320 hitter, as he now is, and he will take a long dive back to .240 at some point.  I’d check out our Fantasy Baseball Trade Analyzer for potential trades.  I’d explore options, I’m not saying trade him for a manshake from Nomar Mazara: 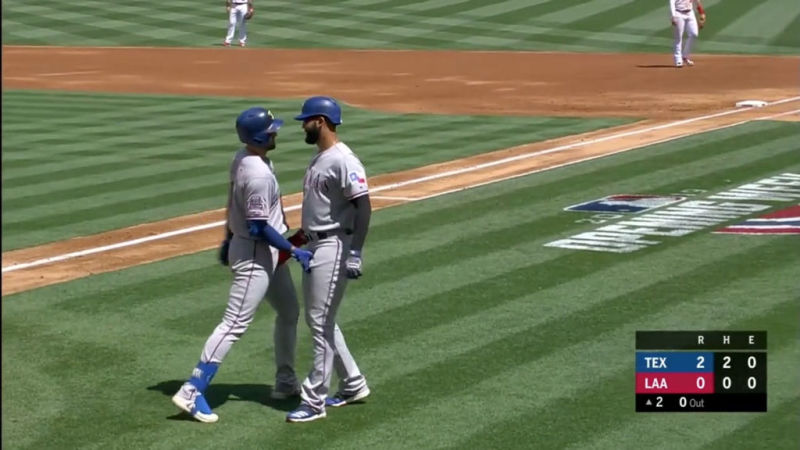